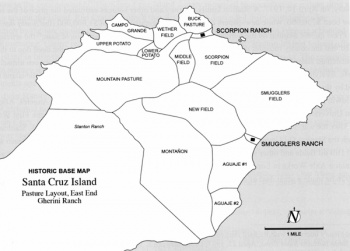 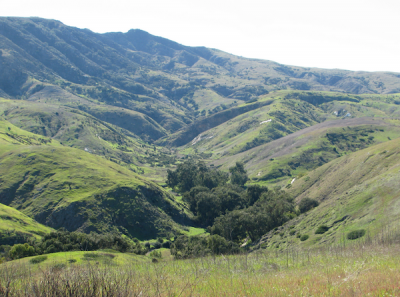 Scorpion Ranch, Santa Cruz Island is located at the east end of the island. Cultivated fields in the vicinity of Scorpion Ranch were Campo Maximo, Campo Cruces and Campo Toros. 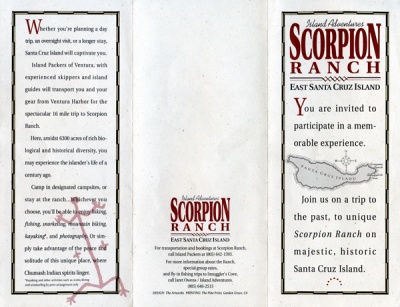 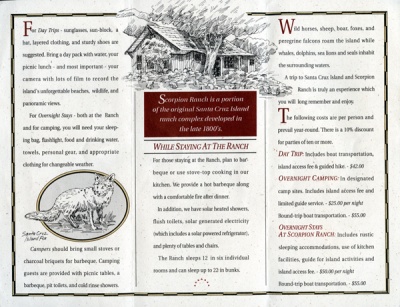 NOTE: A warranty deed with 25-year right of use and occupancy of the Scorpion Bunkhouse and kitchen for the Gherinis ran from from April 25, 1990 until April 25, 2015. Their rights were extended through a Special Use Permit.

November 1, 1875-June 30, 1875 [Stehman Forney, Annual Report]: “Near the landing at Scorpion Harbor there is a ranch house, corrals, shearing shed, two small fields under cultivation, and a well of brackish water.”

May 27, 1902 [SBMP]: “Excavation work reveals bones and other curios. Two tone hatchets taken from the ground—progress on cannery. The report comes from Santa Cruz Island that the fish cannery company in excavating for the new cannery at Pelican Bay has unearthed some very valuable Indian relics. In addition to skeletons and the more common relics of the lost race, two stone hatchets remarkably well formed, were discovered. Captain Merry, who returned from the Island Saturday in his sloop yacht Daisy, brought with him from Pelican Bay a well-preserved Indian skull with the teeth intact. The cannery was formerly located at Scorpion Harbor, but conditions are considered more favorable in the new location. A power hoist will be put in, and with the deep water immediately below the cliff it will be possible to discharge the cargoes of the fishing boats without transferring to skiffs. This will mean a great saving in time.”

August 18, 1904 [SBMP]: “The sheep shearing campaign is now in full blast and 69 vaqueros came into Scorpion Ranch with 4,000 head of sheep taken from the Cerritos at Coches Prietos. The shearing lasts for about four weeks, when upwards of 45,000 sheep are relieved of their superfluous clothing.”

February 20, 1909 [SBI]: “Considerable mystery surrounds the finding of a large fresh water tank off Scorpion Harbor, near the east end of Santa Cruz Island, yesterday, by the schooner Santa Cruz, Captain George Nidever. The tank is a mammoth affair, and has a capacity of 1000 gallon of water. It is similar in make-up to the large fresh water tanks on ocean liners, and is valued at $750. The big tank is rusty in sections, and was covered with barnacles and marine growth when found floating near the island, where it constituted a menace to navigation. It is of heavy boiler iron, and was empty when found by Captain Nidever.”

October 26, 1916 [SCICo]: “We left orders at Scorpion to leave the old blacksmith and carpenter shop stand until we could take this up with you. The shed is flimsy and we do not believe that it would stand moving without tearing it to pieces. The new shed for the kitchen is being built 14x20 as planned ad we have torn down only sufficient of the old shed to make room for this. As we understand it the shearers have occupied this shed and a portion of the old blacksmith shop to bunk in. The main casting of the windmill at Scorpion is probably of the newer type, but is not provided with a gear case nor the splashing device.”

November 1916 [SCICo]: “The writer [superintendent] is going to Scorpion on this trip of the Schooner to castrate the calves there.”

July 20, 1933 [SBMP]: “News of the suicide of Mrs. Carolyn Imboden, 43, of San Mateo, in a sheep shearing house on lonely Santa Cruz Island last Monday afternoon was brought across the channel yesterday by Ambrose Gherini, prominent attorney and owner of the eastern portion of the island. Gherini, who had no boat at the island, told of building signal fires along the island coastline all Monday and Tuesday nights in a frantic fruitless effort to attract a passing craft, but it was not until yesterday that the schooner Gittano, out of Los Angeles, finally answered, and brought him, with the tragic tale, here. Mrs. Imboden was a house guest at the Gherini ranch at Scorpion Bay. According to the story told Coroner E. G. Dodge by Gherini, the body of the woman was found after an intensive search late Monday afternoon. It was suspended from a rafter in a sheep shearing shed near the ranch. Deputy Coroner Dodge said that there will be no inquest, believing it a definite case of suicide. He said that according to Gherini, two notes were left by Mrs. Imboden. A tone of despair was expressed in the note addressed to him. Gherini said, Mrs. Imboden saying that she ‘couldn’t go on any longer’ because of ill health. The second note was addressed to her husband, Daniel C. Imboden, in San Mateo, who was notified of the tragedy by telegram last night. Coroner Dodge said that he would leave for Scorpion Harbor to return the body here early this morning. He will sail on the Ethel A, piloted by Captain Charles Anderson. Mrs. Imboden had been a house guest of Mr. and Mrs. Gherini for a week. When she did not appear for dinner, late Monday afternoon, searching parties were organized. Gherini and a cook at the ranch, discovered the body. Mrs. Imboden had jumped from a box. In addition to her husband, the San Mateo woman leaves a young daughter, who was on the island with her. It is believed that funeral services will be held in San Mateo.”