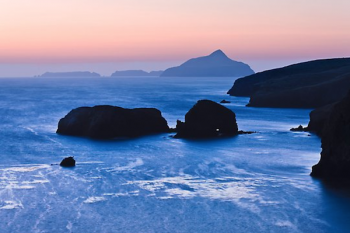 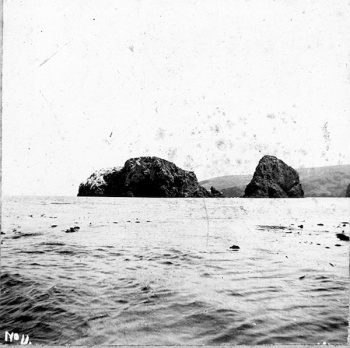 Scorpion Rocks, Santa Cruz Island, are located off the east end of Santa Cruz Island adjacent to Scorpion Ranch. They are home to several nesting sea bird colonies. It was on these rocks the double murders by Fred Roehler took place on January 2, 1981.

August 23, 2017 [VCS]: “The midnight pelagic concert took place atop Scorpion Rock under overcast skies with brilliant bioluminescence percolating beneath our kayaks as we made our approach. Shafts of light beamed off the guano-covered rock outcropping located near the southeast tip of Santa Cruz Island. After landing our kayaks on the volcanic crag, Adam Sachs and I scrambled up to the apex of Scorpion Rock where we found three seabird biologists, headlamps burning bright, and delicately banding, measuring and weighing an ashy storm petrel, a nocturnal seabird also lured to Scorpion Rock, its own pelagic serenade of raspy churr, churr, churr attracting petrels within the immediate region. The Channel Islands National Park offers some of the most vital seabird breeding and roosting habitat for nesting seabirds on the entire West Coast. Scorpion Rock represents this important refuge, and has sort of become the poster child for seabird restoration on the National Park and California’s other Channel Islands. Offshore rocks are inaccessible by land predators and give seabirds a better chance at survival. Scorpion Rock was identified as a restoration site in 2005, and had been monitored in the late 1990s and early 2000s, noting a steady decline in nesting Cassin’s auklet numbers. Habitat degradation and the colonization of crystalline ice plant impacted habitat quality. Work to restore Scorpion Rock began in 2006. All of California’s Channel Islands experienced ranching of some sort, and when ranch animals are transported to islands they inevitably bring nonnative plant seed with them. Northwest wind typically blows over the islands, carrying with it those nonnative seeds to offshore rock outcroppings. In the case of Scorpion Rock, seed from crystalline ice plant landed there and colonized the craggy outcropping, choking out most if not all native vegetation. “When we started restoration on Scorpion Rock,” said Katy Carter, a seabird biologist for the Montrose Settlements Restoration Program based in Long Beach, “there was only one coreopsis [a flowering plant].” Crystalline ice plant has a long, thick root ball, making it difficult to extract from the ground. It also had a profound effect on another nocturnal seabird, the Cassin’s auklet. The little seafaring bird resembles a small penguin and burrows into the ground to build its nest. That crystalline ice plant, however, wasn’t allowing it to do that, so the black and white birds simply went away. “The largest challenge has been in the tenacity, competitive strategies and seed bank persistence of crystalline ice plant,” said David Mazurkiewicz, a National Park Service wildlife biologist also monitoring seabirds at the park since 2006. “It contributes to its ability to colonize locations and out-compete with other plant species.”

The Place to Be. It’s fairly obvious that Scorpion Rock is a very popular place to be. Super thick seabird guano cakes the north side of the rock, where throngs of various seabirds big and small roost on the barren slab overlooking the eastern Santa Barbara Channel. Generally a down coast current flows by carrying a variety of food for the seabirds to feast on, and sometimes it’s crowded on the knobby sea stack. Besides the Cassin’s auklet, seabirds currently breeding and nesting on Scorpion Rock include raucous western gulls, those superior deep divers the Brandt’s and pelagic cormorants, the nocturnal Scripp’s murrelets, ashy storm-petrels, black oystercatchers and whistling pigeon guillemots. There are records of California brown pelicans breeding on Scorpion Rock in the 1970s. During certain times of the year you can count on seeing wandering tattlers, elegant terns, and it’s always a thrill seeing peregrine falcons disrupting the seabird nirvana. I paddle around Scorpion Rock a lot, leading kayak tours there. Years ago I was leading a tour around Scorpion Rock, and one of the participants who had never seen the ocean before asked about the seabird guano, “Is that a fresh dusting of snow?” I laughed. He got the idea once I paddled him downwind, southeast of Scorpion Rock. There are several times throughout the year when I guide folks around Scorpion Rock and we find kayaks tied to it. I never have to ask anyone if they’re wondering why the kayaks are there. They always ask. You see, seabird biologists work crazy hours. They are on it, saving seabirds day and night and keeping Scorpion Rock free of crystalline ice plant. During the day seabird biologists keep the nonnative flora at bay and monitor the growing numbers of Cassin’s auklets. Things are looking up for the hardy seabirds with the white crescents above and below their eyes. For years these seabirds had been missing from Scorpion Rock, but with a dedicated crew of seabird biologists eradicating the ice plant, building makeshift nests for the auklets and attracting them to Scorpion Rock, the results for this restoration project have been astounding. When Mazurkiewicz realized he and his crew had their first active Cassin’s auklet nest, needless to say they were ecstatic. “Relief!” he said, once the first of many little white eggs were revealed. “With the input of all the hard work, time, energy and resources, it was nice to see the potential for it to actually work. Habitat restoration is a long process that requires resources and commitment. It doesn’t happen overnight and most people want instant return on their efforts like this. It’s a marathon and the long-term commitment of the Montrose Settlements Restoration Program (MSRP) has been the key to project success.”

Of Flora and Fauna. Mazurkiewicz currently has nine biologists working for him, housed in the California Institute of Environmental Studies in Davis. Through a cooperative agreement with the National Park and funded by the MSRP, there are currently five full-time field techs/biologists and one seasonal tech. They cover seabird restoration work and monitoring across most of the islands. They removed thousands of pounds of ice plant and that was taken back to the mainland. A nursery of island native plants is kept up in Scorpion Canyon, and the seabird biologists and botanists paddled and planted 15,000 native plants on Scorpion Rock over the last several years. Eighteen different types of plants are now covering the windswept rock. Some of those include giant coreopsis, island deerweed, prickly pear cactus, lemonade berry, giant rye grass, California sagebrush, seaside woolly sunflower, coast goldenbush and island morning glory. All these plants now have a solid foothold on Scorpion Rock, but the crystalline ice plant continues to persist and Scorpion Rock requires a little maintenance from time to time. “Native cover will persist on the rock at this point,” continued Mazurkiewicz. “We are just trying to continue to break the iceplant cycle as long as we can.” At the same time Mazurkiewicz’s crew diligently monitors seabird populations attracted to Scorpion Rock. When they arrive at Scorpion Anchorage by day they check the status of active auklet nests, counting eggs, checking in on downy-feathered chicks, banding birds, weighing and measuring them. By night they catch ashy-storm petrels, mist netting well into the wee hours. Biologists are also banding, weighing and measuring the petrels that number about 10,000 worldwide. The night Sachs and I observed Carter, Amelia DuVall and Andrew Yamagiwa working with petrels, they had set up their 36-foot-wide net on top of Scorpion Rock and played the petrel’s birdsong to attract them to the net. They caught over 20 petrels that overcast night documenting all their information in a ragged, yellow notebook. “These are some of the ways to monitor populations and over time the health of those populations,” explained Mazurkiewicz. “Because these species are mostly pelagic these are some of the only ways to get information into their life history, natural history and population trends. Some at-sea data is collected but the colony data is of extreme importance, especially when it is collected long term.”

Restoration isn’t Free. Montrose Chemical Corp was the company responsible for making DDT pesticide. When that became outlawed in the 1970s, it dumped millions of tons of the chemical into the Southern California Bight near Catalina Island, thus upsetting the pelagic food web. The bight is the curved coastline between Point Conception and San Diego near Catalina Island. After 25 years of litigation, Montrose was court-ordered to pay $140 million in restitution, with $40 million going toward restoring natural resources like Scorpion Rock. The MSRP was created, and returning the National Park to a natural balance became a priority. Even with Scorpion Rock receiving a major facelift, the job is never really complete. It will always need to be maintained, but the funds won’t last forever. In fact, in the next few years additional funds will need to be raised to sustain restoration efforts. “The funding for MSRP does have a sunset within the next few years but we have built up strong partnerships with many collaborators and other agencies in the process of this work,” said Mazurkiewicz. “We are all actively fundraising and getting creative in ways to continue these efforts.” The Scorpion Rock project shows that a shift can occur when facing invasion dynamics while enabling sustaining native populations to reestablish. It just needs to be jump-started and a catalyst provided. Ice plant and seabirds, the battle for a natural balance continues at the Channel Islands National Park.”