Difference between revisions of "Sequoia" 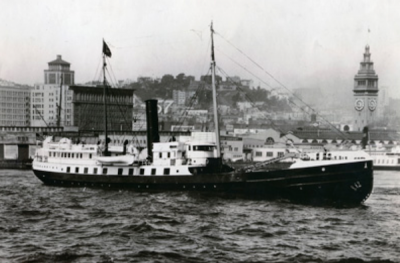 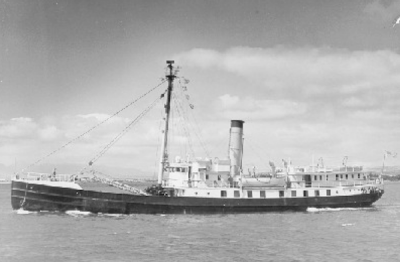 Sequoia (#WAGL-243) (1908-1946), 174-foot steel-hulled, two-masted, twin-screw steam-powered government lighthouse tender built in Camden, New Jersey in 1908 with a home port of San Francisco. She was built as a part of a fleet of six Lighthouse Service ships, three of which worked in the Pacific Ocean: Sequoia, Madroño and Kukui. In 1916 she was transferred to the U.S. Navy for four years, and in 1939 to the U.S. Coast Guard. In 1946 Sequoia was decommissioned and transferred to the Philippines.

November 5, 1908 [LAH]: “San Pedro, Nov. 4. — The the efforts of the local chamber of commerce to induce Senator Flint to secure a gas buoy to mark the channel in the outer harbor have met with success is apparent in a letter from the lighthouse service stating the "committee on floating aids to navigation" has reported to the lighthouse bureau recommending the request to be considered upon the arrival in San Francisco of the new tender Sequoia, which sailed from New York September 21. The trip around the Horn will consume about four months, and illumination by means of a gas buoy probably will be started in the early spring.”

July 25, 1909 [LAH]: “The United States lighthouse tender Sequoia, Capt. Bowerman, from San Francisco, put into this port after a cruise around the islands this morning. On board the vessel were Major and Mrs. C. H. McKinstry and Mr. and Mrs. G. Arnsby. As guests of Capt. Bowerman and in one of the tender's launches Major McKinsitry and Mr. Arnsby passed four hours fishing for yellowtail at the Isthmus. Several good-sized fish were taken by the anglers before they returned to the ship. A rumor is abroad here today that Major McKinistry was at San Clemente Island this morning looking over the situation for a proposed new lighthouse to be located on the west end. The island of San Clemente is a government reservation leased by C. Howland and used as a sheep ranch. It is the most western point on the Pacific Coast.”

April 18, 1910 [SBI]: “The lighthouse tender Sequoia dropped anchor in port about 7:30 o’clock this morning, and left at noon. She brought over one of the engineers who have been engaged in survey work preparatory for installing two new lights on Richardson Rock off San Miguel Island, and on Anacapa Island. These two rocky points offer a great deal of danger to mariners, and the government has decided to construct lighthouses on them.”

April 19, 1910 [SBMP]: “The steamer Sequoia of the lighthouse service came into port yesterday morning from the other side of the channel, bringing Engineer Uron. The greater part of his time was put on Anacapa Island, but he also looked over the Richardson Rock location which is considered one of the most dangerous reefs in the channel...”

February 20, 1912 [SBMP]: “Inspector to depart to install new lights. Beacons will give warning to channel entrances. Commander W. A. Moffett, local inspector of lighthouses, will depart today on the lighthouse tender Sequoia with steel towers and other material necessary for installing lighthouses at Anacapa Island and Richardson Rock. Anacapa Island is at the eastern entrance to the Santa Barbara channel and Richardson Rock at the western entrance. Both have been serious menaces to navigation for many years. Efforts have been made by the maritime interests since 1857, when there was a serious wreck on Anacapa Island, to have lights installed. Acetylene lights will be placed at both points and in about two weeks they will be flashing their warnings to navigators.”

February 25, 1912 [SBMP]: “The lighthouse tender Sequoia, which left San Francisco Thursday with material for installing temporary lighthouses at Anacapa Island and Richardson Rock, arrived here last night and anchored not far from the wharf. As no one came ashore last night it could not be learned what has been done. In all probability the vessel stopped at Richardson Rock, delivering material there, and then ran in here on the way to Anacapa. Commander W. A. Moffat, inspector of lighthouses, is on board. Acetylene light will be placed at both points and it can be expected that they will be acting as warnings to navigators within two weeks.”

February 27, 1912 [SBMP]: “The lighthouse tender Sequoia left yesterday morning for Anacapa Island with material for the new lighthouse. The Sequoia also carries material for the light at Richardson Rock. The ship is expected back in port the middle of the week.”

March 3, 1912 [LAT]: “The lighthouse tender Sequoia today unloaded material for a light at the east end of Anacapa Island, and it was stated by maritime officials that the light, which with the light at Hueneme, will guard the eastern entrance to the channel, will be in operation by next Saturday. The Sequoia also brought material for a light at Richardson Rock on the west end of San Miguel Island. This light, and the one now at Pt. Conception, will furnish a guide for the western entrance.”

March 3, 1912 [SBMP]: “Next Saturday night Anacapa Island light will cast its first gleams over the eastern entrance to the Santa Barbara Channel. This is the statement made by officers of the lighthouse tender Sequoia, which came in here yesterday for supplies, and will remain until this afternoon. Captain H. Anderson of the Sequoia reported that a whistling buoy had already been placed off the eastern end of Anacapa Island. The whistling buoy that has marked the Hueneme side of the channel has been removed, for its place is now taken by a modern fog signal... Upon completion of the Anacapa Island work, the Sequoia will go to Richardson Rock, off San Miguel Island, and mark the western entrance to the channel... The Sequoia will be engaged for another month in this work, and then will go to San Diego to pick up inspector W. A. Moffett, who will tour his entire district. Moffett is now in San Francisco. Men on the Sequoia read with considerable interest and amusement the reports from San Francisco of Lieutenant Moffett’s misadventure with a cactus bush on an Anacapa Island cliff.”

March 8, 1912 [OC]: “According to information left behind them by members of the crew of the United States lighthouse tender Sequoia, which was at Hueneme, after doing considerable work on the Anacapa Islands near Hueneme, the big lighthouse that was installed by them at Anacapa Island will cast its first gleams over the eastern entrance of the Santa Barbara Channel on Saturday night next. Captain H. Anderson of the Sequoia, when seen by a reporter, spoke of the work done in this section… The Anacapa light is to be but a temporary affair, according to his statement, and is the first of its kind on the coast. It will require no attendance, except about once each six months, when the gas making materials have to be renewed… The Sequoia will be at work on the Anacapa light for a short time yet… it will go to Richardson Rock, off San Miguel Island, to place a similar light…”

March 8, 1912 [LAT]: “Next Saturday night the Anacapa Island light will cast its first entrance to the Santa Barbara channel. Being the only light of its kind on the Pacific Coast seamen will be particularly interested in it and are waiting anxiously to see whether it will be successful. This light will require no attendance except about once in six months when the gas making materials must be removed. The tower will be about fifty feet high, of steel skeleton construction, and resting on a concrete base. The altitude of the light will be 180 feet. Such lights have been burned continuously for 24 hours each day in the past, but with a recent patent attached to the Anacapa beacon, the rising sun will extinguish the light and as the sun sets the flame will automatically appear. Captain H. Anderson of the lighthouse tender Sequoia, who has been installing the light, says a whistling buoy has been placed off the eastern end of Anacapa Island, about 3000 feet from shore…”

March 13, 1912 [SBMP]: “The lighthouse tender Sequoia arrived in port yesterday afternoon from Anacapa Island, where she has been engaged installing a temporary light. The rough weather of the past week has interfered with work, but the light will soon be in operation.”

March 26, 1912 [SBMP]: “The lighthouse tender Sequoia in port over Sunday from Richardson Rock where temporary light is being replaced, departed yesterday for the south.”

March 5, 1913 [SBMP]: “The whistling buoy, which marks the entrance to Santa Barbara harbor, is out of commission, and according to Captain G. W. Gourley of the launch Vamoose, is gradually sinking, having been punctured, it is presumed. This buoy, replacing the old one, was put in about three weeks ago by the lighthouse tender Sequoia. The lighthouse service has been notified.”

September 14, 1915 [TI/Avalon]: “The U.S. lighthouse tender Sequoia arrived in port Saturday morning en route for San Francisco and carried away many varieties of marine garden specimens, including live fish that are to be used at the San Francisco exposition...”

September 17, 1923 [SBMP]: “Cuba life boat is found near San Clemente. Badly battered about its flimsy hull, wind-tossed and waterlogged, a lifeboat from the ill-fated Pacific Mail liner Cuba was picked up Friday by the lighthouse tender Sequoia 11 miles below San Clemente Island, according to word received here. The Sequoia, which was enroute to San Pedro from this port, took the lifeboat to San Pedro. The finding of the little craft 127 miles south of the point where the Cuba went aground and is now being pounded to pieces on the sharp rocks, had led to the expression of several conflicting opinions as to how the little vessel found its way down the coast to San Clemente seven days after it left San Miguel Island. Unless it is learned how the craft made the long voyage in its waterlogged condition, an investigation will be made, it was indicated. Capt. J. A. Sellaman of the lighthouse tender, first sighted the drifting vessel bobbing upon the open ocean like a cork in a bucket. It was first sighted at latitude 32.43, longitude 118.32, approximately 11 miles west and south of the southeast tip of San Clemente. In the opinion of the skipper of the tender, it is utterly impossible for the little boat to have drifted 127 miles in seven days. Others stated that it might have been carried by the Japanese current, which is reported to have shown irregularities since the earthquake in the island empire. The Sequoia is scheduled to sail within a few days for San Francisco, and she will carry the little lifeboat with her to be turned over to the superintendent in charge of that port.”