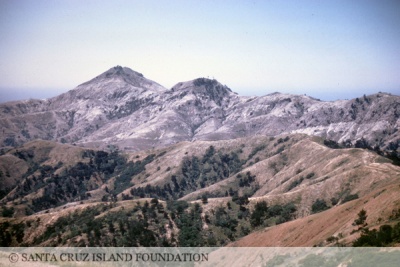 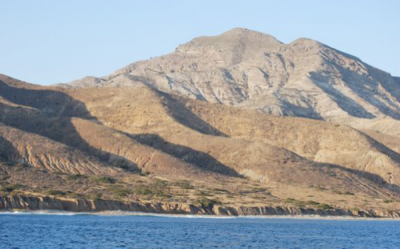 Sierra Blanca, Santa Cruz Island [Sp., white hill] rises to an elevation of 1523 feet to the west of Laguna Canyon on the south side of the island. In May 1932 Ralph Hoffmann wrote: “From the high ridge above the pines, a very steep range of light gray rhyolite rock, called Sierra Blanca, had long aroused the interest and curiosity of the Director. The engineering methods which nature has used in forming the range have made no provision for gentle grades. The wind, moreover, often blows from the northwest along the ridges with such force that man finds an upright position impossible and is forced to become a quadruped.”

This place name appears on the Santa Cruz Island Sheet B topographic map.

April 30, 1878 [SBDP]: “Santa Cruz Island. Researches of a French savant in the island. Lecture of Mons. L. de Cessac, yesterday, before the Santa Barbara Society of Natural History. Mons. de Cessac excused himself from addressing the society in English, he having been only a few months in America… The mission entrusted to him by the French government had principally for its aim the study of the volcanic phenomena and the anthropology of the western coast of North America. The island of Santa Cruz and the neighboring islands of the California archipelago were the first course in his field of investigation… His present purpose was simply to entertain the society with his researched in Santa Cruz Island. The savant opened with a rough sketch of the island, indicating the geological formations… On the southern coast the ground is volcanic as far as the western ranchos, where appear some pudding-stones made of petro-silex… the true southern coast being composed of metamorphic grounds, schists and staurotide and steatite, interrupted at the place called Sierra Blanca by a volcanic formation similar to the one forming the greater part of the northern coast…”