Difference between revisions of "Skinbladnir" 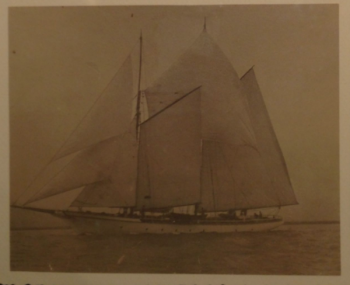 July 26, 1910 [SBMP]: “Frank A. Garbutt’s fine yacht, the Skidblandnir, returned yesterday from Santa Cruz Island where it had been on a week’s cruise. It will probably sail for its home port, San Pedro, today. Mr. Garbutt is a director of the Union Oil Company.”

July 26, 1910 [SBI]: “There have been many camping parties and cruises at Santa Cruz Island the last couple of weeks… F. A. Garbutt showed up with the Skidblandnir, which was conceded to be one of the classiest boats seen this summer in these waters. He brought about seventeen…”

July 6, 1911 [SBMP]: “Next week another large party will go into camp at Fry's Harbor, headed by Commodore Frank Garbutt, owner of the famous yacht, Skidbladnir. Garbutt will be on a two weeks' cruise of the channel, and he has so many friends to entertain that the Skidbladnir will not accommodate them all. Twenty of them will come here to make the passage across the channel on the Gussie M, and the Skidbladnir will be in the service of the party during the entire stay; and while headquarters will be at Fry's, excursions will be made into every nook and cranny of the four islands of the westerly group.”

July 7, 1911 [LAT]: “Frank Garbutt put out to sea last night in his yacht, the Skidbladnir, on a voyage that is unique. His passengers and guests will be a company of moving-picture actors, and his destination is one of the Santa Barbara islands. In the early days of the Spanish occupation of California a fascinating pirate named Valdez used to ravage the shipping along this south coast. Owing to his careless habits of morality, no citizen could be safe at sea with his diamonds. The Spanish galleons which had to sail around with cargoes and silk from India in order to provide future literary material for short story writers had a perfectly fearful time of it. Old Kid Valdez had a rendezvous on Santa Cruz Island — an island dented with the most adorably romantic caves and caverns where the sea comes booming in and splashes the roaring sea lions. On one of these caves Valdez is supposed to have hidden his treasure hoard. He is also supposed to have died there. The Selig Moving Picture Company has undertaken the interesting task of reproducing the scenes of that romantic period at the place where they occurred. Old Valdez will live again at his old hang out…”

July 8, 1911 [SBMP]: “On Frank Garbutt’s big yacht, Skidbladnir, and on Captain Rosaline Vasquez’ Gussie M, a party of thirty actors and actresses of the Selig Motion Picture Company will cross the channel… It was planned yesterday to stage one picture on the wreck of the steamer Santa Rosa, but the developments of the night may make this impossible. The wreck will be visited on the way across.”

July 23, 1911 [LAT]: “Frank A. Garbutt has returned from a cruise in northern waters with his handsome yacht, the Skinbladnir. The party had an exceptionally fine trip down the coast… The Skinbladnir’s party consisted of Mr. Garbutt, his two daughters, son, and nephew. While at Santa Cruz Island, the Skinbladnir and her crew were loaned to a moving picture company, which used her to rescue the ‘heroine’ from the rocks. The company ‘shot’ two comedics in which the yacht figured prominently. One was a society feature, the other the capturing of a wild-man—the actor for this last part being furnished by the picture company.”

July 24, 1911 [LAT]: “Frank A. Garbutt’s yacht, the Skinbladnir, returned to the Los Angeles port yesterday, after having probably broken all records of having her picture shot… The Skinbladnir has completed a cruise about the Santa Rosa and Santa Cruz islands where she has been the scene of the thrilling rescues, romances, and foiled villains, of the Selig Company, which Mr. Garbutt accompanied on their trip north…”

August 3, 1911 [LAT]: “Frank A. Garbutt’s yacht, the Skinbladnir, had an exciting time in the outer harbor of San Pedro… Some scenes were shot which will be used in connection with those made a few weeks ago at Santa Rosa Island, where the company [Selig Moving Picture Company] took a series of scenes on the Skinbladnir…”

January 31, 1913 [SBMP]: “Frank A. Garbutt, the millionaire yachtsman and oil king of Los Angeles, whose Skidbladnir has been a familiar sight in the channel every summer for some years, will build a fifty-foot boat for Captain Rosaline Vasquez, who has been in command of the Gussie M during recent seasons, and who is one of the best known mariners on the coast. The new craft, the name of which is not yet decided, will be built by the Fulton Company at San Pedro and will be ready for service in May. It will be used exclusively for island passenger traffic, in connection with Captain Vasquez’s exclusive privileges on Santa Cruz Island and will be quite the finest boat ever offered for public use in these waters. It is about 15 feet longer than the Gussie M, and will have two cabins, one for ladies and one for gentlemen, two toilets, eight berths and facilities for carrying about 40 passengers. The yacht will be equipped with fifty horse-powered Imperial engines, and will be complete and attractive in every way. The boat will cost more than $50,000. Mr. Garbutt is prominently identified with the Union Oil Company.”

July 11, 1913 [SBMP]: “Frank Garbutt’s yacht Skidbladnir sailed yesterday for the islands, after having spent a few hours in port. Mr. Garbutt, who capitalized the Vasquez summer camp at Santa Cruz Island, and the passenger launch Otter, is looking over the arrangements for handling the summer crowds, and also enjoying his annual cruise in these waters.”

August 7, 1913 [SBDN]: “Frank A. Garbutt of Los Angeles, owner of the Otter, the local launch run by Captain Vasquez, is at Friar’s Harbor at Santa Cruz Island with his handsome yacht the Skidbladnir. Mr. Garbutt has been in the custom of visiting the Channel Islands every summer, dividing his time between cruising around them and visiting Santa Barbara. He will probably sail over to the city within a few days.”

August 16, 1913 [SBMP]: “From a very authoritative source it was learned yesterday that Frank Garbutt, the owner of the yacht Skidbladnir, plans the building of a yacht to cost no less than $100,000 in which the world will be circumnavigated. Jack London, the writer, is to be a member of the party. Mr. Garbutt yesterday took a party of friends to the islands and may be gone a few days. It is also understood that when Mr. Garbutt returns from the islands he may also have something to report on the alleged willful slaying of seals at Santa Barbara Island. He has become very much interested in the controversy between Commissioner Pritchard and Charles E. Davis, and proposes to visit some of the rookeries and see if the dead seals are in evidence. Mr. Garbutt is interested in true sport, and if there has been illegal killing of seals, he will lend his assistance to putting it to a stop. On the round-the-world trip two years may be spent. A motion picture operator and outfit will accompany the party.”

June 14, 1918 [SBMP]: “Skidbladnir Is Off For Islands. Capt. Frank A. Garbutt's Skidbladnir arrived from San Pedro yesterday morning and with a jolly party aboard proceeding to the islands for an outing. Several sailed up and others had made this leg of the trip my motor. About a dozen will be enjoying the island beauties.”