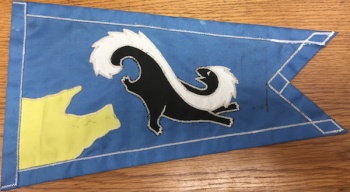 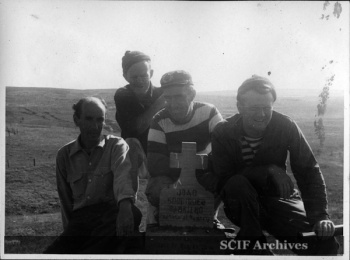 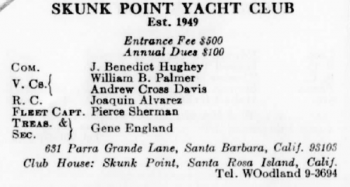 "Bearer is entitled to Free Drinks and Courtesies of Clubhouse on San Miguel Island."

There was no Clubhouse on San Miguel Island, of course.

May 1952 [Motor Boating]: “The facts surrounding the choice of names which are given yachts at the christening ceremonies are, and have always been, mighty interesting, but equally as absorbing are the circumstances which accompany the formation and naming of some yacht clubs... New club with a romantic background. But now a new club which has had an equally fascinating beginning, although there is a bit more romantic reason for its present existence. At first glance its name does not seem to be connected with sentiment, for those who recently founded the organization have decided that it should be known as the Skunk Point Yacht Club. While we stay on the windward side of the striped animal, for which the famous point [on Santa Rosa Island] undoubtedly received its name, we can outline the facts behind the formation and naming of the new yachting organization. History related that Juan Cabrillo died and was buried in 1542 on San Miguel Island, one of the group of islands off the coast of Santa Barbara, California. Skunk Point is one of the famous arms of the island and juts into the blue Pacific Ocean. From time to time expeditions of yachtsmen have gone to San Miguel Island and attempted to locate Juan Cabrillo's grave but all without success. In these amateur expeditions Skunk Point played an important role, so it is not surprising that the new club should bear the name of the familiar landmark. Although history relates the date of Juan Cabrillo's demise, it does not indicate the exact spot on the island where his remains were buried. This question has plagued the minds of the club's flag officers to the extent that it is understood the organization's first commodore, Ben Hughey, has flown to Europe where he will seek in the archives for more accurate data pointing to the spot where the mortal remains of Juan Cabrillo might be found on San Miguel Island. It is understood that Commodore Hughey will inspect the records in Spain, Italy, Portugal and other old-world countries to determine, if at all possible, the exact spot of the great explorer's grave.”

September 3, 1964 [Valley News, Van Nuys]: “Foursome dines prior to game. Prior to attending the baseball game at the Dodger Stadium, Mr. and Mrs. Pierce Sherman of Malibu beach were entertained at dinner at the Wild Goose restaurant by Mr. and Mrs. Bob Hall of Sherman Oaks. All are members of the Skunk Point Yacht Club.”

[n.p.; n.d.]: “Exclusive organization around town is the Skunk Point Yacht Club, with only five charter members, all yachtsmen who have sailed through the rough Santa Cruz passage to Skunk Point, a little sand spit that sticks out on the eastern end of Santa Rosa Island. The members, Bill Palmer, Ben Hughey, Joaquin Alvarez, Pierce Sharman and Andy Davis, even have their own flag (with a skunk on it) and sweatshirts with the club's name printed on them. They've just completed their third annual cruise to Skunk Point aboard Palmer's 50-foot schooner, Bluejacket. Not much point to it because there's nothing on the island, so they just turn around and come back, but it's one way to pass time.”