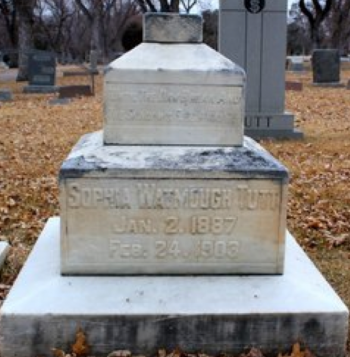 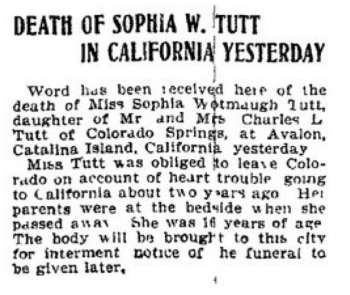 Sophia Yacht Club, Santa Catalina Island was formed in 1903 by boatmen and other fishing enthusiasts in Avalon. The club was identified by the initials SYC. It was named after Miss Sophia Watmough Tutt (1887-1903), daughter of wealthy mining engineer, Charles Leaming Tutt (1864-1909), a boater and frequent visitor to Catalina Island from Colorado Springs, Colorado. On February 24, 1903, Sophia Tutt died of heart failure while on a visit to Avalon. She was 16. She is buried in Evergreen Cemetery, Colorado Springs. Her father died six years later in 1909 at age 44 at the Waldorf Astoria Hotel in New York.

In 1913, the club requested a site from the Santa Catalina Island Company on the new Pleasure Pier, but their request was denied. By 1915 they had a clubhouse in Avalon (away from the water), complete with a reading room and landscaping. They had a caretaker and a billiard table, but they wanted a facility on the water. On June 6, 1918, the club voted to change its name to the Catalina Motor Boat Club. Its first meeting was held on February 3, 1919. Although the newly named club, which included James Jump, constructed pilings, caps and flooring on a beach site approved by William Wrigley, Jr., new island company owner, the club house was never built. Money ran out. Boat builder, J. E. “Pard” Mathewson built his boat shop at the location, but the Avalon fire of 1915 destroyed the facility.

The club was a major influence in the formation of the Catalina Island Yacht Club in 1924.

On June 6, 1918 the Sophia Yacht Club voted to change its name to the Catalina Motor Boat Club.

[1]: “Word has been received here of the death of Miss Sophia Watmough Tutt, daughter of Mr. and Mrs. Charles L. Tutt of Colorado Springs, at Avalon, Catalina Island, California yesterday. Miss Tutt was obliged to leave Colorado on account of heart trouble going to California about two years ago. Her parents were at the bedside when she passed away. She was 16 years of age. The body will be brought to this city for interment. Notice of the funeral to be given later.”

July 3, 1903 [LAH]: “Avalon, July 2. — A large number of passengers came over on the Hermosa this noon, and nearly all will remain over the Fourth... The Sophia Boatman's Club has taken the Fourth of July entertainment in hand. The members have raised money for purses and will endeavor to make this the record Fourth at Avalon. The following program will be presented: Mowing races, beginning at 10 o'clock; wheelbarrow race, potato race, ladies' swimming race, men's swimming race. In the afternoon there will be launch races, pneumatic mattress race, a race between glass bottom boats, a tug of war with five row boats on each side, a fat man's race and a sack race. In the evening all the launches, glass bottom boats, yachts and other craft will be brilliantly illuminated and go out to sea to meet the late boat, escort it in and afterward maneuver around the bay. Captain Clarence Jargstorff will have the direction of the aquatic events and E. L. Doran and Thomas Manning have been named for judges. Arrangements have also been made for a dinky or punt race for a cup between members of the South Coast Yacht Club.”

February 22, 1916 [TI/Avalon]: “If the present plans are accepted the Sophia Yacht Club are to have elaborate quarters and a location near to the former location of the bath house. It is planned to build an eighty foot structure and in which will be work rooms for members, rest rooms for visitors, and a reception room for displaying mounted specimens. For many years the launchmen who compose the S.Y.C. have tried to locate their headquarters on the waterfront so that their guests and patrons could be entertained. That the proposed site 'has been worth waiting for' is the consensus of opinion among those in the boating and party fishing business.”