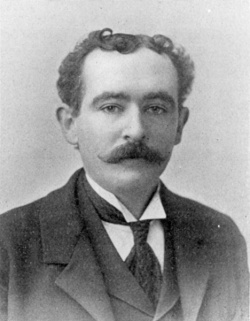 TAYLOR, Henry Reed (1866-1917), ornithologist and founder of The Nidiologist.

"We here take pleasure in presenting a portrait that we know will be if interest to many of our readers, and not only those of California and the West where it will be received with joy; it is that of Mr. Henry Reed Taylor. Mr. Taylor has been prominent in the field of amateur ornithology for ten years or more, and for four years published that excellent magazine of amateur ornithology, 'The Nidiologist.' Mr. Taylor is the son of the famous Bishop Taylor, of Africa, and he himself saw first light on the dark continent. But Mr. Taylor managed to see well in the dark, and now holds a high position on one of the large daily newspapers of San Francisco. He resides in Alameda, across the bay from San Francisco." The Osprey 2(6-7):90, Feb.-March 1898.

The Auk: “Henry Reed Taylor, well known as the founder of the Nidiologist, died at Agnewo, Calif., Sept. 23, 1917. He was the son of Bishop William Taylor of the Methodist Episcopal Church and Isabella A. (Kimberlin) Taylor, both of whom were born in Virginia. Harry R. Taylor as he was generally known was born at Capetown, South Africa, Oct. 6, 1866, but spent most of his life at Alameda, Calif. He was an enthusiastic oologist and published many articles on nests and eggs of western birds especially Raptores and Hummingbirds. During the period of his ornithological activity, from 1884 to 1906, his field work was confined to California and included chiefly the counties of Alameda, Monterey, Placer, San Benito and Santa Clara, and the Farallone Islands. His contributions were published chiefly in the Young Oologist, Ornithologist and Oologist, Nidiologist and Condor. From 1893 to 1897 he edited the Nidiologist which was then the organ of the Cooper Ornithological Club. One of his latest publications, issued in 1904, was his Standard American Egg Catalogue, which included an appendix containing a directory of oologists. Shortly after the great earthquake of 1906 he became a patient in a sanatorium where he passed the last eleven years of his life. Taylor was one of the founders and vice president of the California Ornithological Club in 1889, and vice president in 1894 and president in 1895 of the Cooper Ornithological Club. Although he never joined the American Ornithologists' Union, he was known to a number of the members, attended the Washington meeting in 1895, and published the first group photograph of the Union (Nidiologist, III, p. 41, Dec. 1895). He was active, energetic, always enthusiastic in any matter pertaining to oology, and was one of the most prominent of the little group of California collectors of the eighties. —T.S.P.”