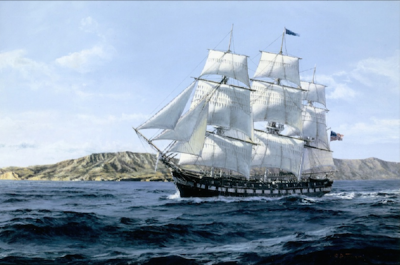 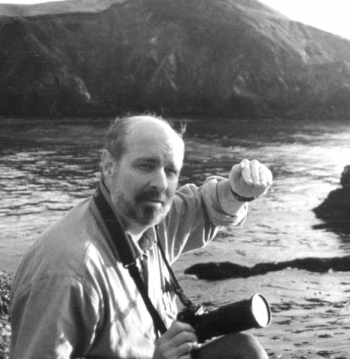 THIMGAN, David (1955-2003), a Southern California native, Thimgan attended public schools in San Bernardino and later enrolled at Cal State University. He became a modern maritime artist who specialized in re-creating scenes of America’s seafaring past with emphasis on the West Coast and Pacific Rim waterways. He was also interested in trade on the western rivers and the naval aspects of the American Civil War as well as the "Old Steam Navy." He painting professionally beginning in 1978, and was an Artist Member of the American Society of Marine Artists since 1981. His reputation as one of America's leading historical marine artists grew rapidly. His work appears in important private collections around the world, and major corporate collections including Goodyear and Security Pacific National Bank. Some of Thimgan's major exhibits include the Mystic lnternational, the Mystic Invitational and the American Society of Marine Artists National Exhibition.

This oil on board work (right) is the artist's vision that shows the American 44 gun frigate Congress on patrol off Santa Cruz island in August of 1846 during the Mexican-American War. Congress was the last sailing frigate built by the United States. She was sunk by the Ironclad C.S.S. Virginia (ex-Merrimack) at Hampton Roads Virginia in 1862.

June 19, 2003 [Seymour, CT]: “The world of Marine Art has lost a great talent. Internationally known artist, David Thimgan passed away on Wednesday, June 11, 2003 at his home in Chico, California. David Thimgan was born in Inglewood, California in 1955. A self-taught artist, inspired and mentored by his father, he began painting and drawing ships as a child. Few artists painted the rich and varied maritime history of the West Coast with the devotion and passion of David Thimgan. Thimgan painted the Mendocino coast and its environs perhaps more than any other location, often traveling as an historian with camera, topographical map sketchbook and tape recorder in hand. He visited and examined those places up and down the West Coast that had once thrived with coastal maritime trade activity in order to conjure up what they must have looked like in the Age of Sail. Although his paintings were well researched and unique, it is the ethereal light and intoxicating Pacific Coast air that seem to pervade his work that earned him a special place among American marine artists. Retrospective showings of David Thimgan’s paintings have been held at the Australian National Maritime Museum, Ventura County Maritime Museum and the Kelton Foundation. David Thimgan was a member of the U.S. Naval Institute and a fellow in the American Society of Marine Artists. He was the recipient of the Mystic International Award of Excellence and two Rudolph J. Shaefer Awards. Three books that included his paintings have been published. He will also be included in the October 2003 book, Bound for Blue Water: Contemporary Marine Art, a definitive collection of American marine artists of the twentieth century. Survivors include: his brother Tom Thimgan of Phelan, California and mother, Jane Thimgan of San Bernandino, California; wife, June Carey and step-son, Robert Conly, both of Chico, California. A cremation will be held. Memorial donations may be made in David Thimgan’s name to: Chico Cat Coalition, P.O. Box 4214 Chico, California 95927 or Mystic Maritime Museum, P.O. Box 6000, Mystic, Connecticut 06355.”