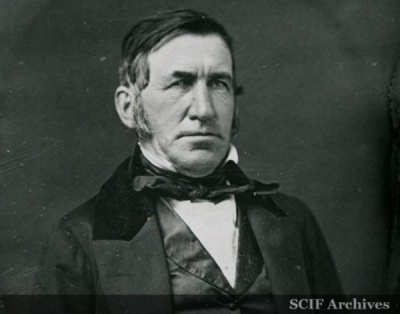 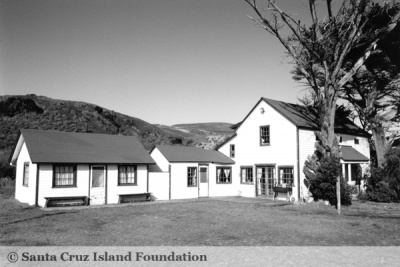 THOMPSON, Alpheus Basil (1797-1869), seafarer born in Maine to Alexander Thompson (1757-1820) and Lydia Wildes (1761-1858). He came to Santa Barbara via Hawaii in 1834. Thompson was a merchant, otter hunter, farmer, stock raiser, and shipbuilder of the Washington, Bolivar Liberator, Famer and Loriot. He played an important role in the economic and political development of Santa Barbara. His younger brother, Alexander Francis Thompson, achieved fame as captain of the Pilgrim, made famous by Richard Henry Dana’s Two Years Before the Mast. Dixie Wildes Thompson was his nephew, son of his older brother, John. Captain and artist, Frank Wildes Thompson, was another nephew, son of his younger brother, Wildes Thomas Thompson.

Nine years after the Thompson marriage (1843), Francisca’s father and her uncle (José Antonio Carrillo) were granted Santa Rosa Island. They in turn sold the island to Francisca and Thompson, and to her sister Manuela and her husband, John Coffin Jones who had married in 1838. The sisters paid their father $3,300 for the island, “one half in silver money of good quality and the other half in goods.” Brothers-in-law John C. Jones and Alpheus Basil Thompson thus became partners in Santa Rosa Island. Funded by Jones, Thompson developed a large stock operation on Santa Rosa Island. In 1844 he built the first redwood house on the island, and by 1855, he had built a second house and a number of corrals. Although Thompson and Jones had been in business together as co-owners of several ships engaged in transporting goods from Mexico to California, they had a falling out over their island affairs.

Jones had moved to Boston in January of 1846, leaving Thompson to run the island, with all proceeds to be split. When Thompson sold a large number of cattle and did not send Jones money, Jones, represented by Alfred Robinson and Charles Fernald, filed suit against Thompson in 1851. Thompson lost the suit, claiming influential Robinson had “bought” witnesses. After Thompson lost again on appeal, his island interests were sold to More. In 1869 at age 74 Thompson suffered a stroke in Los Angeles and died on February 22, 1869. A. B. Thompson papers are on file in the Santa Barbara Historical Society library. Alpheus and Francisca Thompson had six children:

July 1858: Dixey [Dixie] W. Thompson, Plaintiff vs. John C. Jones, Alpheus B. Thompson, Francis A. Thompson, Isabel Thompson, Caroline Thompson, Albert Thompson; Charles E. Huse, Guardian, & T. Wallace More, and Abel Stearns, Defendants. Action brought in the District Court of the 1st Judicial District, State of California, Los Angeles County. Dixey [Dixie] W. Thompson, the Plaintiff… alleges… in or about the year 1844, defendant Alpheus B. Thompson became located upon Santa Rosa Island in the County of Santa Barbara and engaged in the business of raising stock, to wit, meat cattle, sheep and horses… on the 30th day of March 1852, by the order and request of said defendant, Alpheus B. Thompson, the said plaintiff was engaged and employed by the said defendant, to take charge of, control and master a certain schooner called Sophia, claimed by the said defendant to be owned by him… engaged in the importation of stock to and from the Island of Santa Rosa from the said 30th day of March in the year 1852, to the 1st day of October in the same year, a period of six months, for which said service... to pay the said plaintiff the sum of $100 per month… the said defendant is now indebted to the said plaintiff… in the sum of $600…”