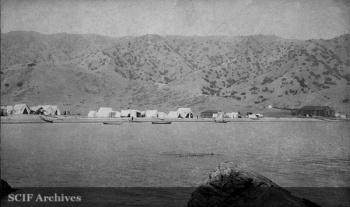 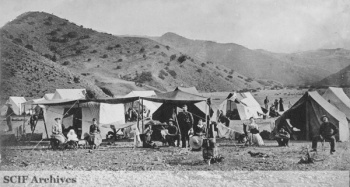 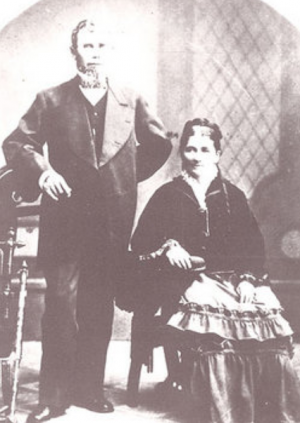 A. W. and Louise Timms 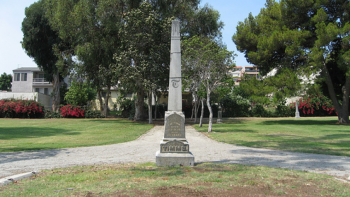 TIMMS, Augustus William (c. 1825-1888), German immigrant who served in the U. S. Army during the Mexican-American War (1846-1848). Timms obtained Sepulveda’s Landing on the mudflats at San Pedro in 1852, where he built a warehouse, corral and other facilities to serve increasing shipping needs. His vessels included Rosita, Pioneer and Ned Beale, the last two of which were built on Santa Catalina Island. Timms was captaining a California coastwise schooner in 1857 when he met Miss Louise Welte, of Dogren, Germany, on one of his voyages between San Francisco and San Pedro. They were married the following year.

He went to Santa Catalina Island about 1862 and went into the sheep-raising business. During this time, goats were introduced to help lead the sheep, however they multiplied rapidly and when they began to crowd out the sheep, they were shot in large numbers. Timms hauled water across the channel for the animals. Timms’ Point and Timms’ Landing in San Pedro, named for Captain Timms, are California Historic Landmark #384. Avalon, Santa Catalina Island was also known as Timms’ Landing until the name was changed by George Shatto’s sister-in-law, Etta Marilla Whitney, in 1887, to Avalon Bay.

Captain Timms died on July 21, 1888 at age 63, and is buried in the Harbor View Cemetery (formerly San Pedro Cemetery) on land he deeded to the newly-incorporated City of San Pedro for a cemetery.

On October 28, 1891, Louise Timms married her second husband, Julius Seick, in Los Angeles. She died at age 76 and is buried in Evergreen Cemetery, Los Angeles.

1853 [LASTAR]: “Dissolution of Copartnership. The copartnership hitherto existing between A. W. Timm, and J. F. M. Johnson, as COmmission and Forwarding Merchants, at San Pedro, is this day dissolved by mutual consent. A.W. Timm will carry on the business on his own account. April 2, 1853.”

April 1863. [February 21, 1932 LAT]: “…In the 1860s Catalina had a gold rush. The first claim was that of Martin M. Kimberly and Daniel E. Way, recorded in April 1863. Assays on this claim ranged from $150 to $800 a ton. Stock companies were hastily formed, a site for the ‘Queen City’ was chosen, and city lots were staked out on the all but uninhabited island. But the only real mine found on the place was found to be Captain Timms’ paint mine, and even that was a failure, so the boom came to naught.”

May 20, 1876 [VS]: “Captain Myron Warner with his schooner Pioneer, in company with his cousin, Mr. Ed Warner and Charles Streeter, and three hands left on Thursday, bound for Anacapa, where they will engage in sealing until the 4th of July. They took 60 barrels in which they will ship their oil. Charles Streeter goes to shoot seal. He is said to be the ‘boss’ sealsman. The oil will be sold on the island [Santa Catalina] to Captain Timms, of San Pedro, at a stipulated price. Captain Warner intends, when through this expedition, to quit the perilous business, and to settle down in our midst as a land-lubber and speculator.”

1881: Captain A. W. Timms advertised in 1881 that his schooner, the Rosita, would take passengers to Santa Catalina Island for bathing and fishing, but he warned his customers that they would have to find their own conveyance to get to his dock. The customers would have to furnish their own provisions and camping equipment as the round trip fare was only $4. The Captain provided a pasture and forage for the horses of his passengers. [Houston, John M. Early Excursion Ships to Santa Catalina, 1978, p. 2]

July 28, 1882 [LAT/SCat]: ““Santa Ana, July 25. A trip replete with pleasure, incident and adventure… At 2:30 P.M. we boarded the Ida and, in tow of the tug Cricket, we squirm and twist along the crooked channel of Wilmington Creek to the inner bay at San Pedro. There we find business lively, five schooners discharging cargo at the new wharf, and twelve other vessels lying outside. The Ida unfurls her sails to the wind, casts loose from the Cricket, and under the impulse of a brisk breeze, goes skimming over the blue water… In due time Catalina was reached… The camp and the place where we landed is at Timms’ Meadow, on the southern end of the island. The camp consisted of about forty tents, occupied by about 150 persons, of all ages and of both sexes, people who came there for the sole purpose of having a good time, and they did have it. The beach at this point slopes gradually off to deep water, and is an excellent bathing place. Bathing, fishing, boating and hunting was the order of the day, and at night the young people congregate to play all manner of amusing games, and make the still night air ring with peals of the merriest laughter…”

July 13, 1883 [LAT/SCat]: “Timms’ Landing, Catalina Island. Those that have left Los Angeles and other places do not regret that they are here enjoying the soft breezes, delightful boat rides, excellent bathing and fishing…”

July 30, 1886 [KEJI]: “My trip this summer to Santa Catalina Island… After one week’s stay at the Isthmus, we decided to go to Timms’ Landing, about 16 miles east of the Isthmus… While we were at Timms’ Landing we caught one young seal, and as we were going home the next day we let it go…”

September 21, 1890 [LAT/SP]: “San Pedro. A point of attraction… Timms’ Landing, where since there is a very good hotel, which since good Captain Timms’ death is kept by his nephew, Mr. Schumacher…”

July 4, 1901 [LAT/Scat]: “Avalon. The old ranch house, a landmark, standing near the Avalon Church, has been torn down to make room for the march of improvements. It was built thirty years ago by the late Captain Timms of San Pedro, who then owned a band of sheep on the island. A portion of the lumber in its construction was evidently from the wreck of some ships, as some of the timbers and boards are of cedar.”

November 6, 1903 [LAH]: “It is reported that the San Pedro Canning Company has secured a location for its plant on the east side of the bay and will move to East San Pedro soon. Upon the termination of its lease with the Southern Pacific the company was unable to negotiate terms for a longer period and had contemplated moving to San Diego, but having secured a suitable location will remain here. The removal of the plant from its present quarters is in line with the improvements which the Southern Pacific Company has in contemplation for the port dating from the granting of concessions by the San Pedro city trustees, which gave the railroad possession of Timms Point. When these plans are carried out, the entire harbor front will be changed. About twenty acres of tide lands have been reclaimed at Timms Point and with the adjacent holdings of the Southern Pacific Company a large acreage is available. Here it is rumored the Southern Pacific allotted space for wharves and yards for lumber companies, which at present occupy the railroad’s wharves…”

November 20, 1905 [LAT]: “Funeral of Mrs. Louise Seick, formerly Mrs. Timms. Lived in San Pedro almost half a hundred years. Home was built on wreck of ship of her husband… In this home she had entertained many of the notables of California… Mrs. Timms always took an active interest in the affairs of her husband, and as the country developed they prospered. They owned the waterfront extending from the point much of the way toward the present government breakwater, and also acquired title to interests in the 6,000-acre Palos Verdes Rancho. Captain and Mrs. Timms donated to the government the eight acres on which Point Firmin lighthouse now stands, and they also donated to San Pedro the cemetery site, on the slope of the Palos Verdes hills. In the very center of this cemetery is Captain Timms’ grave. Captain Timms died in 1888, and left to his widow all his valuable realty holdings. Mrs. Timms was married to Julius Seick October 28, 1891… She died on Friday, at the age of 76 years.”

November 20, 1905 [LAT]: “Captain Timms became interested in the transportation line which at that time was running a stage line between San Pedro and Los Angeles. His boat was wrecked on the spit of sand now so well known as Timms’ Point, and it was then that he gave up the life of a sea captain and devoted his attention to interests on land. The great hull of his vessel was righted on the sands, and on this was built the two-story building that for so many years was the principal hotel of San Pedro. The building was known as the Ocean House, and it was for more than half a century the home of [Timms’ widow, Louise T. Seick].”

November 28, 1926 [LAT]: “Pioneer tells what Catalina looked like when she saw it some sixty-four years ago. Sixty-four years ago [1862] a tiny girl, Mary Lamoure, stepped from a skiff onto the beach of a barren island called Timms’ Landing, probably the first white child to visit the island…”

February 21, 1932 [LAT]: “…At one time Captain A. W. Timms, one of San Pedro’s colorful figures, was interested in Santa Catalina. He stocked it with sheep and ran his three sailing vessels, the Rosita, Pioneer, and Ned Beale, the last two of which were built on Catalina, between San Pedro and Avalon. It took from twelve to fourteen hours to make the crossing and once Captain Timms was becalmed on the trip for seventy-two hours. Every two months he hauled between 200 and 300 barrels of fresh water to the island for his sheep. Presently he conceived the idea of adding goats to his stock. These were so successful that they crowded out the sheep. The wild goats now sought by hunters on Catalina are the descendants of these domestic Billy goats of Captain Timms.”