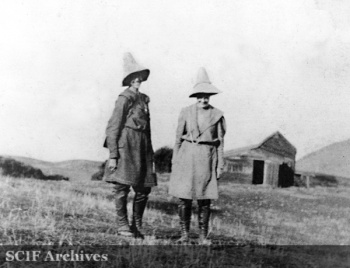 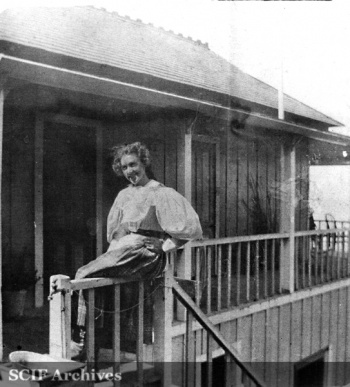 Mrs. Trask on porch in Avalon

TRASK, Luella Blanche (1865-1916) neé Engles, was a botanist, poet and island explorer who lived on Santa Catalina Island at Avalon and Fisherman’s Cove from 1895 until 1915. She made extensive collections on the Southern Channel Islands during the late 1890s and early 1900s. As early as 1896 she made field trips to San Clemente Island, and in April 1897 she collected plant specimens on San Nicolas Island. In 1900 she collected plants on both Santa Rosa and Santa Cruz island, at the latter of which mountain mahogany, Cercocarpus betuloides var. blancheae bears her name. In 1901 she discovered a species of Dudleya on Santa Barbara Island which was named in her honor, Dudleya traskae. The locoweed, Astragalus traskae, found on both Santa Barbara and San Nicolas islands, was also named in her honor, as was Catalina mahogany, Cercocarpus traskae. Mrs. Trask spent an additional three months on San Clemente Island in 1903, but specimens from this trip, as well as many others were lost in the 1906 San Francisco earthquake and fires. Nine years later, Trask’s personal herbarium was destroyed by fire at Avalon on Santa Catalina Island in November 1915.

Trask authored more than a dozen articles and poems, particularly about Santa Catalina Island. On March 6, 1886 at age 20, Blanche married Walter Trask in Minnesota, and they had a daughter, Caroline, born December 6, 1887. They divorced in 1895 when Caroline was 9 years old. Blanche Trask died in Colfax, California on November 11, 1916 where she had gone due to her pulmonary trouble. It was the year following the loss of her herbarium at Avalon, Santa Catalina Island. Trask was 51 years old.

December 6, 1896 [LAT]: “The marriage of two of Ontario’s society young people was the event of the week. The participating parties were Miss Blanche Trask and Irwin Phillips. The ceremony was performed at the residence of Mr. and Mrs. F. E. Trask on Wednesday evening, and was attended by only the relatives. After the ceremony Mr. and Mrs. Phillips went to their newly-furnished home on A Street, where they will be at home to their friends after January 1. Invitations are out for the wedding reception, which will be given next Wednesday evening. The young people were the recipients of numerous and very beautiful presents.”

May 1, 1897 [LAH]: “The yacht Nellie returned from San Nicolas Island yesterday with a party of nine visitors, who have been staying there for two weeks. Some very interesting Indian relics were among the treasures brought back by members of the party. A collection of the flora of the island, numbering 100 varieties, many of them unknown, was made by Mrs. Trask during her stay in San Nicolas. They report very rough weather in the\at windy isle.”

September 12, 1897 [LAT]: “The Land of Sunshine always has a pleasant way of telling things…’The Heart of Santa Catalina’ is a most readable sketch by Blanche Trask, which is supplemented by many illustrations of that lovely island scenery.”

May 15, 1901 [LAT/SCat]: “Successful botanist. Over a month ago, Mrs. Trask chartered the Avalon and went over to San Nicolas Island on a botanizing expedition, taking with her Mrs. Ledbrook and Gus Knowles. This morning in the early hours they reached home again, having had a very successful and interesting trip, bringing with them a hundred varieties of rare plants and flowers. They found the island rather bleak and thirsty, as less rain has fallen there than here.”

March 21, 1902 [LAT/SCat]: “Willie Harriman, son of contractor E. E. Harriman, accompanied Mrs. Blanche Trask on a botanizing trip Tuesday, and in reaching over the side of a cliff for a plant, lost his balance and fell, striking on one hand in such a way as to give a bad sprain to the wrist.”

April 25, 1902 [LAT/SCat]: “Mrs. E. A. Ledbrook, a former resident of the island, came over yesterday and will accompany Mrs. Trask to San Nicolas Island for a month’s botanizing. They will start in a few days.”

May 6, 1902 [LAT/SCAT]: “Avalon. The yacht Avalon, Captain J. E. Mathewson, with Gus Knowles and Harry Doss as supercargoes, which was chartered by Mrs. Trask to take her and a few friends to San Nicolas Island for a month’s botanizing, had a hard time landing. They left here Saturday evening, April 26, and the yacht only reached home again last Saturday night… ”

June 4, 1902 [LAT]: “The yacht Avalon returned last night from San Nicolas, bringing back Mrs. Trask from a month’s botanizing on that island. They were gone a week and encountered some pretty rough weather, but not more so than was expected. Notwithstanding the revenue cutter Bear reported that the wrecked schooner La Gironde had disappeared, it still lies there on a sand spit and one can walk all around it at low tide.”

February 25, 1904 [LAT/SCat]: “Avalon. February 24. ‘Ischia’ Cottage, the beautiful and interesting home of Mrs. Blanche Trask, was the scene of a pleasant function last evening. It was a tea given by Mrs. Trask to her friend, Mrs. C. S. Bingham of Mass., who will be remembered by a large circle of island friends, made during frequent previous visits, as Mrs. J. B. Kinney. There are few homes which have the interest of that of Mrs. Trask. Almost her entire time for years past has been devoted to botanizing, and most of her time is spent in the woods and hills of this and neighboring islands, and she has accumulated a store of curios and relics of bygone ages which have a wonderful interest when their uses and purposes are explained by the hostess. The building and the spacious veranda, as well as the beautiful garden of nasturtiums which covers the hillside, were illuminated with colored lights, and Rev. Dr. Mark Guy Pearse, the eminent English evangelist, added much to the entertainment of those present by making several of his lightening sketches.”

July 13, 1904 [LAT/SCat]: “Avalon. July 12. Captain Quigley of the launch Lydia has taken John H. Paine on a shelling expedition this week under the chaperonage of Mrs. Blanche Trask.”

December 22, 1909 [LAT]: “Avalon. December 20. After debating for a year as to whether she could part with her collection of relics, Mrs. Blanche Trask today shipped it to the Museum of Anthropology, Affiliated Colleges, at San Francisco. It is valued at more than $10,000. Over 100 packing cases of large size were used to send the prehistoric relics to the museum. The catalogue classified 5000 pieces… Sixteen years ago Mrs. Trask came to the Island of Santa Catalina an invalid. Today she can out walk nearly everyone here…”

December 22, 1909 [OT]: “Avalon. Mrs. Blanche Trask shipped today her entire collection of prehistoric specimens to the Museum of Anthropology, of the affiliated colleges in San Francisco… Among them are complete skeletons of two early inhabitants of Santa Catalina and the ribs of a monster whale believed to have formed the framework of the habitat of some prehistoric chief…”

February 16, 1910 [OT]: “The University of California has received a gift of a large collection of anthropological material from the southern Santa Barbara islands, from Mrs. Blanche Trask… The actual number of separate pieces is about 5000. Mrs. Trask’s gift is made without any conditions…”

March 7, 1911 [LAT]: “Reports reached here today that Mrs. Blanche Trask, who left two months ago to search the deserts for archaeological and botanical specimens for the Academy of Scientists of San Francisco and the Department of Agriculture at Washington has arrived at Thermal, Riverside county. Many specimens of Indian relics have been found and some few rare weeds which have heretofore not been classified… Several years ago, Mrs. Trask commenced to collect products of the early Indians, who formerly inhabited the islands of San Clemente, San Nicolas, San Miguel and Santa Catalina, and her information compiled has been entered upon record with several universities. She is the author of several scientific books.”

March 13, 1916 [LAT]: “Returning with a collection of San Nicolas Island relics that would cause envy in the mind of any museum curator in the country, Captain A. P. Chappel, Ralph Glidden and A. Taschenberger arrived at Avalon last night on the launch Cornell after four months of self-exile on the outermost of the Channel Islands. During their stay on the islands the men opened scores of ancient graves and brought back with them an as yet unclassified… The curios brought from San Nicolas Island are now of greater value than previously believed, owing to the fact that two valuable life-time collections were destroyed in the Avalon fire. With this destruction a collection owned by Mrs. Blanch Trask was also lost.”

November 21, 1916 [TI/Avalon]: “Word has been received here that Mrs. Blanche Trask, after a lingering illness, passed away on November 11th, in a San Francisco hospital. The funeral services were held November 14, and later the ashes were disposed of. Mrs. Blanche Trask was the mother of Miss Caroline B. Trask. Miss Trask’s many Avalon acquaintances and friends desire to offer her their sympathy and condolence. For many years, Mrs. Trask was a resident of Avalon, beloved to all. Much scientific data relative to the island’s history, now on record, is the work of Mrs. Trask. As a botanist, and writer of special articles on the early settlers of the Channel Islands, she won a wide and honorable reputation. For months at a time she camped on the different islands, braving untold hardships, to study the habits of the Indians. Recently a valuable collection of Indian relics, gathered by her, was sent to Stanford University. During the fire last year the remainder of her historical and botanical collections of scientific specimens were destroyed. It is said that Mrs. Trask grieved very much over this great loss. During the summer months, Mrs. Trask and her daughter, Caroline B., spent much of the time at their beautiful camp at Escondido Harbor, near the Isthmus. Several years ago Mrs. Trask walked from the Isthmus to Avalon, and returned to Escondido Harbor, a distance of 42 miles by road and trail, in one day.”

April 23, 1918 [TI/Avalon]: “Mexican Joe it is who from time to time moans over the past when he did not know enough to have relics ‘in his eye. ‘I might hev bin—I b’leve, I might bin—rich man this day (sure’s I’m sittin’ here), maybe millionheir, ef I’d hed any sense at all long time ‘go! It makes me too tired to think about it all! W’y, this ‘ere whole island, Cat’lina and Clemente was jes covered in what they all like so much now; relics, you call! Nobody then even liked them. Not ‘til Prof. Schumacher come; then I finds out, I tell you!…” [By Blanche Trask in The Whittier Magazine.]

August 19, 1931 [TI/Avalon]: “Mrs. Luella Blanche Trask resided in Avalon and Fisherman’s Cove, near the Isthmus, from 1895 to 1915. She collected many valuable botanical and mineral specimens which she donated to the New York Botanical Garden, U.S. National Herbarium, Field Museum, and California Academy of Sciences. The fire in 1915 at Avalon and the San Francisco fire of 1906, destroyed her collections at her home in Avalon and the California Academy of Sciences. Fortunately, there were a few duplicates in other herbariums. Mrs. Trask thought little of walking from Avalon to the Isthmus and return in one day. She died November 11, 1916 in San Francisco. Mrs. Trask was often visited by her daughter Caroline. After her mother’s death, Miss Trask married and for a number of years has been living in Paris, France.”