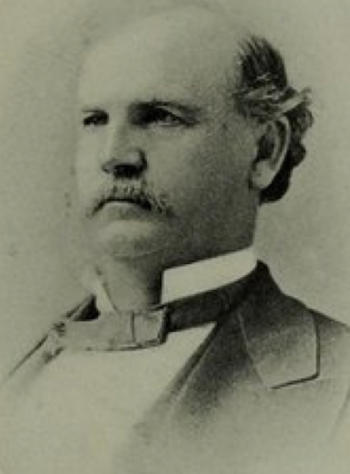 TROWBRIDGE, William Petit (1828-1892), born at Troy, Oakland County, Michigan on May 25, 1828, he was a graduate of the U.S. Military Academy at West Point and at the top of the class of 1848. An Army Captain, Trowbridge entered the U.S. Coast Survey in 1849. He was placed in charge of the first West Coast tidal observation party. He worked as a tidal observer for the United States Coast Survey from 1851-1856. He was given a permanent appointment as Assistant Secretary of the Coast Survey. Trowbridge was a civil engineer, scientist and author who served on the Pacific Coast from 1853 to 1856, during which time he made extensive natural history collections, many of which are in the museum of the University of Michigan.

Trowbridge spent about 20 days on San Miguel Island in 1855, during which time he collected birds, including a burrowing owl and a California grebe.

Trowbridge served as head of the engineering department of the Columbia College School of Mines (1877-1892). He also served as vice-president of the American Association for the Advancement of Science, and as a member of the National Academy of Sciences. Trowbridge died in New Haven, Connecticut on August 12, 1892.

TROWBRIDGE, William P. “Born at Troy. Oakland County, Michigan, May 25, 1828; died at New Haven, Connecticut, August 12, 1892. A tidal observer of the Coast Survey who, while stationed on the Pacific Coast for three years secured at San Diego, about 1853, a Surf Scoter which Prof. Baid considered a new species and named in honor of the collector, Pelionetta trowbridgei The name is now regarded as a synonym of Oidemia perspicillata (Linn.). He also collected the type of Aegialitis nivosa Csasin, at the Presidio, San Francisco, May 8, 1854. Trowbridge later became a vice-president of the American Association for the Advancement of Science and a member of the National Academy of Science.”

August 19, 1892 [Science]: “Death of Professor W. P. Trowbridge. Professor William P. Trowbridge, the head of the engineering department of the Columbia College School of Mines, died of heart-failure at his home in New Haven last Friday. He was born in Troy, Oakland County, Mich., May 25, 1828, and entered the West Point Military Academy in 1844, where he graduated four years later, receiving an appointment as second-lieutenant in the corps of engineers. He had served as Assistant Professor of Chemistry during the last year of his course at the academy, and after his graduation he was occupied for some time with astronomical work at the West Point Observatory. In 1851 he was appointed to a position on the Coast Survey under Superintendent Bache, which he held until 1856, and at a later time he took part in the survey of the James and Appomattox Rivers and in a series of surveys on the Pacific coast.

In 1854 he had received a commission as first-lieutenant in the U.S. Army, which he resigned two years later to accept the professorship of mathematics in the University of Michigan; but after a year of service, he resigned his professorship also, and was appointed scientific secretary to the superintendent of the Coast Survey. During the Civil War he again served in the army, and rose to the rank of brigadier-general; his work in the army being largely in connection with fortifications in New York harbor and elsewhere.

After the war was over he resigned his commission again, and entered the Sheffield Scientific School of Yale College as Professor of Dynamic Engineering, but resigned in 1877 to take the professorship of engineering at Columbia, which, as we have stated, he held up to the time of his death.

Professor Trowbridge was the author of a treatise on 'Heat as a Source of Power' and several other works on engineering subjects. He was the chief agent of the tenth census for collecting statistics relating to power and machinery employed in manufactures. He was for four years Adjunct-General of Connecticut, was Vice-President of the New York Academy of Sciences and of the American Association for the Advancement of Science, and was a fellow of the National Academy of Sciences. For several years Professor Trowbridge was a director of the Science Company.”