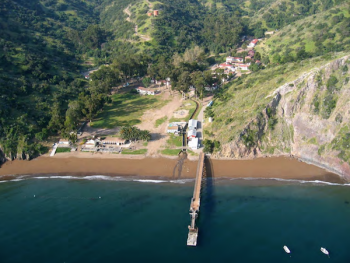 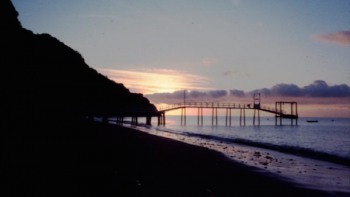 Toyon Bay, Santa Catalina Island, is two and a half miles by sea from Avalon Bay, past Descanso Bay, White Rock, Frog Rock and Gallagher Canyon. It is one if the island's more historic sites. It was the site of a boys' boarding school, Catalina Island School for Boys, in the early 1900s, and structures from its time as a boy’s boarding school are still used today, including the dorms and dining hall.

In 1931 Keith Vosburg developed the Toyon School For Boys. They built facilities in the harbor and had English professors; the boys wore blue blazers, grey pants and blue ties. They weren't liked in Avalon, according to Doug Bombard.

During World War II, the facility was used as an Office of Strategic Services training camp. American and Chinese men were trained in guerilla warfare. After the war, it again became a boarding school and a resort in the 1950s. The site was then abandoned for two decades.

In 1979, Guided Discoveries bought the site where they run the Catalina Island Marine Institute (CIMI), a science facility for children and summer campers.

New structures have been added.

The 1940 census lists the following as residents of Toyon Cove:

During World War II, the boys were evacuated and the facility was turned into an Office of Strategic Services training camp. Chinese and American men were trained in guerrilla warfare for use behind Japanese lines in China. The Office of Strategic Services was the precursor to the Central Intelligence Agency. After the war, it saw time as a boarding school, a singing camp, resort in the 50's and was later abandoned.

In 1979, it was purchased by Guided Discoveries, Inc. and has since been run as the Catalina Island Marine Institute (CIMI), a marine science facility for school children and summer campers. Today the facility includes dormitory accommodations and indoor and outdoor dining facilities. Additionally, the site contains laboratories, classrooms, aquariums, display areas, and recreational facilities.

January 25, 1922 [TI/Avalon]: “Banning's Beach, on the coast line above Avalon, has been leased for a period of five years to A. S. Laurie of Long Beach, and it is planned to rename the boach 'Camp Toyon' and to establish a girls' school, under the auspices of the different schools of Long Beach. The plan calls for several substantial buildings, an electric lighting and gas system, a pumping plant, and the expenditure of some $25,000 for educational equipment. Camp Banning is the site formerly occupied by by the Whittier State School as a summer vacation spot. It is about three miles from Avalon. The girls' school will occupy the property the entire year round.”

April 20, 1924 [LAT]: “The Toyon Camp for Girls, situated three miles west of Avalon on Santa Catalina Island, will open for the third season on July 1. The camp is under the personal direction of Mrs. D. F. Laurie of the Girls Collegiate School in this city. Rustic cabins and tents are provided. Swimming and water sports, riding, tennis, golf, basketball, archery, target shooting and hiking are some of the sports in which the girls interest themselves.”

March 28, 1947 [Desert Sun]: “Burton, Schutt, designer and architect who has made the Bel Air Hotel in Bel Air known all over the world for its beauty, is staying at the Raquet Club and is intensively interested in the new plans for Charlie Farrell's new Toyon Bay Club in Catalina.”