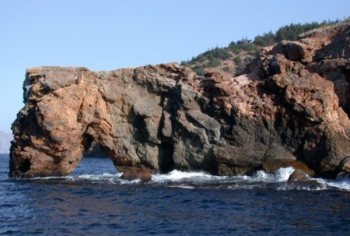 Twin Harbors, Santa Cruz Island is located to the west of Pelican Bay and to the east of Orizaba. The point of land jutting into the ocean which separates the two “twin” harbors ends in a large arch through which the ocean flows. Helen Caire [1993] wrote that Honest Ben, a fisherman who lived at Dick’s Harbor for many years, “was found very ill at Twin Harbors and unfortunately died before reaching the mainland.” On August 26, 1966, the Cinnamon Bear burned and sank at Twin Harbors. This place name appears on the Santa Cruz Island Sheet B topographic map. Vessels wrecked at Twin Harbors include: Cinnamon Bear (1966).

April, 1967 [PUN]: “The [Cinnamon Bear] story is that there were only two men and that they had just finished painting engine room. The paint caught fire and drove them overboard. They were taken aboard another fishing boat from which they watched the Cinnamon Bear sink in 50 feet of water right next to the cliff. To get there look at a chart of Pelican Bay about the middle of the island on the north side. Just above Pelican Bay you’ll see Twin Harbors. About one hundred yards above Twin Harbors, right there next to the cliff is where she lies.”