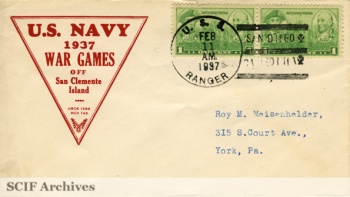 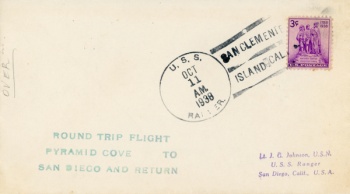 U.S.S. Ranger (1934-1946), was the first US warship designed and built from the keel up as an aircraft carrier. Secretary of the Navy Charles F. Adams assigned the name Ranger on December 10, 1930 to commemorate five US warships which had previously borne the name. The ship was 769 feet long and carried 86 aircraft.

Mrs. Lou Henry Hoover, wife of Herbert Hoover, the outgoing President of the United States, smashed a bottle of Prohibition-era grape juice on the bow of the ship, thus became the first First Lady to christen an aircraft carrier. The ship was commissioned on Monday, June 4, 1934 and decommissioned on Friday, October 18, 1946. The ship was sold for scrap to Sun Shipbuilding & Drydock Co., Chester, Pa., January 28, 1947.