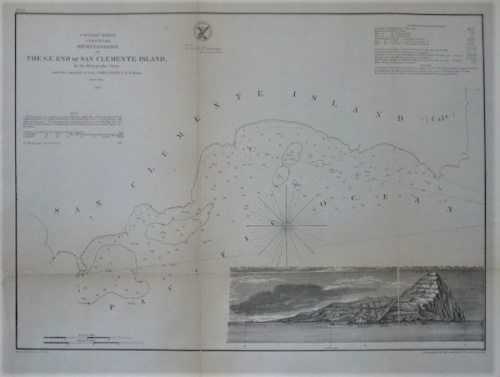 United States Coast Survey, later named the U.S. Coast and Geodetic Survey, and then the National Ocean Survey, is oldest civilian scientific agency of the Federal Government. It was established by Congress, during the presidency of Thomas Jefferson, in an act of February 10, 1807 to provide for the surveying of the coasts of the United States. Jefferson himself was an accomplished surveyor. Ferdinand R. Hassler was appointed its first head. In 1816, Congress repealed the act, only to reinstate it in 1832 with Hassler again presiding, until his death in 1843. Hassler was followed by Alexander Dallas Bache, Superintendent of the U.S. Coast Survey from 1843 to 1865. In the early 1850s, the west coast of California, including the California Channel Islands, was surveyed under the leadership of George Davidson and James Madison Alden.

In the years 1851, 1852, 1855, 1873-75, 1934, and 1935 hydrographic surveys were conducted around the Channel Islands. Triangulation and topographic surveys were conducted in 1855, 1859, 1860, 1874, 1875, 1933, and 1934. In 1853, Reconnaissance Chart of the Western Coast of the United States from San Francisco to San Diego was published, including detailed charts of some Channel Islands ports. Alden painted the earliest known view of the Central Valley on Santa Cruz Island in 1854. Several of George Davidson’s original island charts are located in the Santa Barbara Museum of Natural History’s Channel Islands Archives.

In 1899, Superintendent H. S. Pritchett reorganized the survey into “three grand divisions:” Hydrography and Topography, Geodesy, and Magnetism. A Division of Charts was created in 1915-1916.

Superintendents of the United States Coast Survey (after 1919, Directors):

EMPLOYEES WHO WORKED ON THE CALIFORNIA CHANNEL ISLANDS OR FOR WHOM PLACES ARE NAMED:

June 25, 1853 [NYD]: “The U.S. surveying schooner Ewing, Lieutenant Stevens, was at San Pedro on the 20th instant, and would leave next day for Catalina Island. Lieutenant George Davidson was actively engaged in the performance of his duties as Chief Assistant of the Coast Survey.”

July 19, 1855 [SBG]: “The U.S. surveying schooner Ewing arrived in our harbor on Saturday evening last, from the island of Anacapa, where she has been engaged in the duties of the survey. A party have been landed here, who will proceed to the neighborhood of San Buenaventura, where they will probably remain some time. The Ewing sailed yesterday for the Island of Santa Catalina to continue the survey.”

July 21, 1855 [SBG]: “The surveying schooner Ewing, under the command of Captain McKae, returned to this port on the 17th instant, from the Island of Anacapa, where the party under his command have been engaged in making a hydrographic survey. The schooner left for the island of Santa Cruz on the 19th, and from thence, we learn, she is to proceed down the coast.”

March 28, 1856 [NYDT]: “We were shown yesterday at this office a beautiful map of the survey of Anacapa Island, and the eastern part of Santa Cruz Island, situated in the channel of Santa Barbara, which survey was executed and returned to this office by the Superintendent of the Coast Survey… The Coast Survey have in charge the survey of all the islands on this coast, with a view to their sale as other public lands, so that those who fancy ocean homes, may, before long, obtain the object of their desire.”

October 12, 1873 [SBDMT]: “Captain S. Forney of the United States Coast Survey, and his party are now at work upon the Santa Cruz Island making a topographical survey of the island. He has already completed a survey of San Miguel and Santa Rosa. We hope that when the survey by the United States of all the islands of the Santa Barbara Channel is completed, that map-makers will inspect the charts before they attempt to locate them. On all the current maps neither the shape nor position of the islands is properly represented.”

October 12, 1873 [SBDMT]: “Mr. Tittmann of the United States Coast Survey, and his party left yesterday on board the schooner Star of Freedom for San Miguel Island. In the party are Mr. Woodward and Mr. Edwards of the Survey. They are engaged in the work of main triangulations. We hope to see them soon again in Santa Barbara.”

November 13, 1876 [SBMP]: “The Coast Survey corps on Anacapa Island has almost finished its work, and will move thence to Laguna, a point at the southern extremity of the Santa Clara Valley. We had the pleasure of meeting Mr. Wainright, U.S.C.S., today. He was to have sailed this afternoon for his field of operations on Anacapa Island.”

January 6, 1874 [SBDMT]: “The schooner Star of Freedom left for Santa Cruz Island with supplied for the U.S. Coast Survey yesterday. It will take several months to complete the work now in progress there.”

August 24, 1876 [SBDP]: “The United States Coast Survey sloop Catalina arrived here last evening from Santa Catalina Island. She came up in charge of one man, and made the passage against a head wind in fifty-four hours. The sailing master who brought her up slept but two houses on the passage, during which time the sloop was in charge of Captain S. Forney, United States Coast Survey, and has been employed during the past year at Santa Catalina Island.”

September 4, 1876 [SBDP]: “Captain Forney, U.S.C.S., and party left by the surveying yacht Catalina yesterday, for Catalina Island, where operations pertaining to its survey will be resumed. So many empty farewells are said by newspapers nowadays that they don’t amount to much, but, Captain, this is between ourselves. May your pennon ever wave!”

September 13, 1876 [SBDP]: “A survey party returned this morning from the island of Santa Catalina.”

November 13, 1876 [SBDP]: “The Coast Survey corps on Anacapa Island has almost finished its work, and will move thence to Laguna, a point at the southern extremity of the Santa Clara Valley. We had the pleasure of meeting Mr. Wainright, U.S.C.S., today. He was to have sailed this afternoon for his field of operations on Anacapa Island.”

May 8, 1877 [SBDP]: “E. Tittmann, Esq., who died last Thursday on the island of Santa Catalina, wintered in Santa Barbara last year, and spent many months among us. About two months ago he went with his brother, O. H. Tittmann, Esq., of the Coast Survey, to the island for change of air.”

June 10, 1886 [SBDP]: “The Coast Survey party (C.A. & P.R.R. Co.), now making their headquarters at Anaheim, have been engaged in a thorough reconnaissance of the surrounding country to determine the best location for a ten mile base line from which to start their triangulation that is to extend northward and connect former surveys in the vicinity of Santa Barbara, and southward to the Mexican boundary, also to connect with the San Clemente and Santa Catalina Islands.”

November 6, 1895 [LAT/SB]: “Captain Ferdinand Westdahl of the United States Coast and Geodetic Survey is in Santa Barbara. The object of his visit is to make a thorough survey of San Miguel Island. It is reported that his recommendations will include either a lighthouse on the island or a whistling buoy.”

November 17, 1895 [LAT/SB]: “Captain Westdahl of the United States Geodetic and Coast Survey office, has concluded his investigations on San Miguel Island and returns to San Francisco Sunday afternoon on the steamer St. Paul. Mr. Westdahl is very reticent as to the object of his visit to the island named. He states, however, that he has verified the fact of the upheaval that took place on San Miguel Island last spring.”

January 4, 1897 [LAT/SM]: “By order of the surveyor-general, a survey will be made of San Clemente, Santa Barbara, San Nicolas and San Miguel islands and certain rocks in the neighborhood of those islands. Preliminary to this survey it will be necessary to take formal possession of these islands in the name of the government, and for this purpose a corps of deputy United States marshals will go with the party, perform the necessary ceremony and raise the American flag. The surveyors may then proceed with their work. As rumors have from time to time been heard that the Mexican government may assert its claim to certain rights in these islands, developments of an interesting character are looked for.”

June 3, 1898 [LAT/SB]: “W. B. Fairchild of the United States Coast Survey service has returned from Santa Cruz Island. He will remain in this vicinity several months, establishing new stations.”

July 18, 1898 [LAT/SB]: “Mr. And Mrs. Fairchild have gone to Santa Cruz Island, where Mr. Fairchild is in charge of the Coast and Geodetic Surveying Station. They have been for weeks in this city guests of Mr. And Mrs. Pretty.”

June 26, 1933 [SDET]: “California's coast is to have a new series of the world's most accurate navigation charts as a result of complete success with which the coast and geodetic survey steamers Guide and Pioneer have this spring utilized that service's newly perfected sound-ranging system in offshore surveys from Point Sur south to San Nicolas Island. The Pioneer, working from Point Concepcion to San Nicolas, and the Guide, running surveys between Point Sur and Point Concepcion, are both ahead of schedule and near completion of those sectors. The two ships are scheduled now to come here next week to conduct a series of tests to determine velocity of sound at various submarine depths as well as in waters of varied salinity and temperature...”