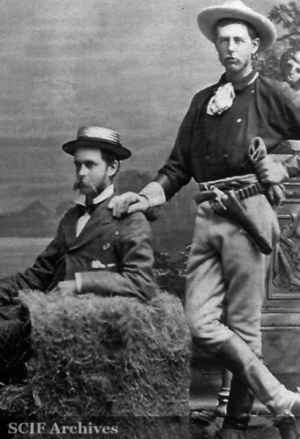 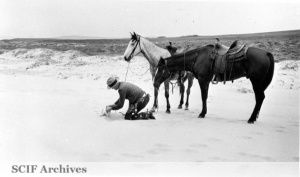 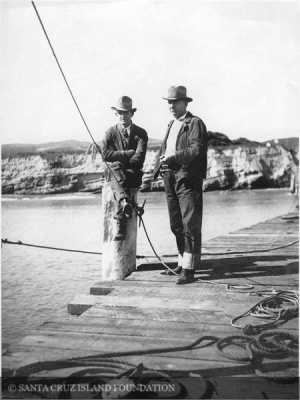 VAIL, Edward Newhall “Uncle Ed” (1893-1961) [SS#557-20-5758], youngest son born to Walter Vail. He took over management of Santa Rosa Island when his oldest brother, Nathan Russell “N. R.,” died in 1943. Ed Vail first married Mary Morgan “Brownie” Bullock (1897-1977). They had a daughter, Mary (b. 1924), an informally adopted daughter Betsy, and daughter Susan. The Vails divorced, and Ed Vail then married Colorado-born Violet Zellers (1911-1961), seventeen years his junior. They had no children together. On November 12, 1961, Ed Vail shot and killed his wife, and then took his own life in their Santa Barbara home. He was 67 and she was 50. Al Vail took over management of Santa Rosa Island upon his death. Russ Vail described his uncle: “Uncle Ed was a slave-driver. He was a hell of a cattleman and a hell of a horseman and a hard drinker. He rode in a coat, a tie, and a vest all his life. Even if he was a little drunk, he was courteous as hell — he was a great gentleman.”

July 9, 1919 [Revocable License]: “Whereas, by an instrument of revocable license dated July 9, 1919, issued by the Secretary of Commerce, and renewals thereof, one E. N. Vail was given permission to use and occupy for grazing purposes the site of the San Nicolas Lighthouse Reservation…”

[1930]: “Ed Vail, of Vail & Vickers—owners of the Vaquero and our neighbor on Santa Rosa Island, brought us, our supplies, our wedding gifts and my personal belongings and set us on our rocky shore. In the months to come, he was our only dependable link with civilization…” [Elizabeth Sherman Lester The Legendary King of San Miguel Island, 1974.]

June 11, 1934 [Revocable Permit]: “Whereas, by an instrument of revocable license dated July 9, 1919, issued by the Secretary of Commerce, and renewals thereof, one E. N. Vail was given permission to use and occupy for grazing the purposes the site of the San Nicolas Lighthouse Reservation, California, that is at present under control and jurisdiction of the Secretary of the Navy; and Whereas, E. N. Vail disposed of his sheep, horses, equipment and other improvements on said Government reservation to R. E. Agee and L. P. Elliott, who are now, and for more than five years past have been, occupying Government reservation; and whereas the term of occupancy expires July 31, 1934… Now Therefore, in consideration of the premises, the Secretary of the Navy hereby grants to R. E. Agee and L. P. Elliott permission to occupy the Naval Reservation, San Nicolas Island, California, for grazing purposes from August 1, 1934.”

September 1947 Museum Leaflet, Santa Barbara Museum of Natural History reported Phil Orr's paleontological work on Santa Rosa Island was “being carried on under a grant from the Vail & Vickers Company made possible through the personal interest of Mr. Ed Vail.”

November 13, 1961 [LAT]: “Edward Vail, 68, one of the owners of Santa Rosa Island, and his wife, Violet, 50, were found shot to death at their Santa Barbara home Sunday morning. Police said Mr. Vail apparently shot his wife and then took his own life. A 45-caliber pistol was found near the bodies in the home at 1405 Mission Ridge Rd., officers added. Mr. Vail had been manager for about 30 years of Vail & Vickers, a family partnership that raises several thousand cattle on the 56,000 acres of Santa Rosa Island 25 miles off the coast. Vail field, original home of Western Airlines in the pioneer days of commercial aviation, was named for his father, Walter L. Vail. The field, located in the Montebello area, was subdivided several years ago as an industrial tract. Mr. Vail leaves a brother, Mahlon, and a sister, Mrs. Mary Vail Wilkinson, both of Los Angeles. Investigators could not immediately learn a motive for the double tragedy.”

November 14, 1961 [Arizona Republic]: “Slays Wife, Kills Himself. Santa Barbara, Calif. A wealthy rancher and land owner shot his wife to death and then fired a bullet through his brain in the couple's luxurious home here, police reported. Dead are Edward Vail, 68, one of the owners of the offshore Santa Rosa Island, and his wife, Violet, 50. Vail was the son of Walter Vail, founder of the huge Empire Ranch in southern Arizona. Walter Vail bought the ranch near what is now Vail, Ariz., from E. N. Fish in May 1879. He expanded it until it reached from the foothills of the Rincon Mountains near Tucson to the Mexican border and from the Santa Cruz Valley to the San Pedro River. The community of Vail is named for the family and the Empire Mountains are named after the ranch. The ranch is now broken up. Edward Vail had been manager of Vail & Vickers, a family partnership for about 30 years. The partnership raised several thousand cattle on Santa Rosa Island. Mrs. Vail's niece, Mrs. Janice Cannon of Santa Barbara, said she was a guest in the Vail home Sunday when the shooting occurred. She gave this account: She heard her aunt calling for her early Sunday from the couple's bedroom across the hall from her own room. When she walked into their room, she saw Mrs. Vail trying to push away a pistol held by her husband. "Janice, he's going to shoot me," Mrs. Vail screamed. Mrs. Cannon ran from the room, she told police, fearing for the life of her child, who was sleeping in another wing of the house. Moments later, she said, she heard two shots. Mrs. Vail was shot in the chest. Police could give no motive.”