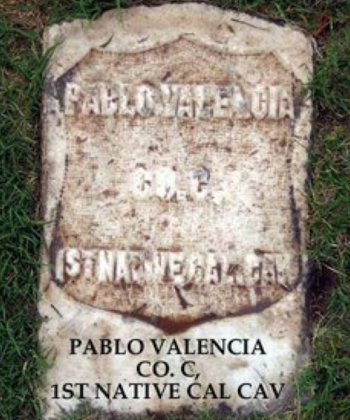 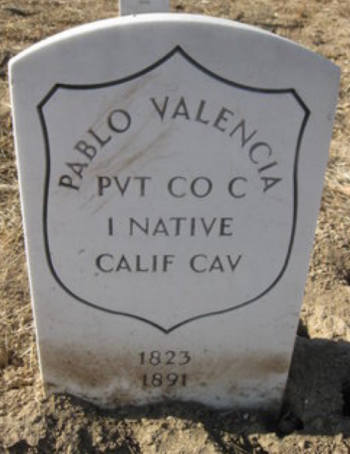 As a young, Pablo Valencia enlisted in the Civil War Native Calvary. In 1890, he filed for a pension (Application No. 939,351). Valencia’s death record at Santa Barbara Mission notes he was a widower at the time of his death. Valencia was originally buried at Cieneguitas Cemetery, Santa Barbara. In about 1938 he was reinterred at Calvary Cemetery (#471), along with three other men of Company C.

July 14, 1891 [SBMP]: “Three men drowned. One saved after clinging to a rock 24 hours. The sloop Liberty, which returned Sunday afternoon from San Miguel Island with her flag at half-mast, brought the body of Pablo Valencia and the following account of a fatal accident that occurred there a week ago yesterday. The west end of San Miguel Island was, on the morning of Monday the 16th inst., the scene of a sad accident. Three Mexicans, Pablo Valencia, his nephew Eduardo Valencia, and a young Negro boy, left camp at about 5:30 A.M. for the usual seal hunt. About 7:30 o’clock, being ready to return to camp. John Pico jumped into the boat, which was left in charge of Pablo Valencia and the boy. Simultaneously a big sea took the boat quite close to the rock. In his endeavor to push off, Pablo lost his oars, and a second and larger wave carried the boat into the rocks, smashing in the stem and side. Pico and Valencia were thrown into the water, while Johnny Amos sprang into the air and landed on the keel of the boat as she rolled over. Pablo Valencia swam quite a distance, but in the endeavor to remove a very heavy coat, was unable to extricate his hands and sank out of sight. His body was recovered late Tuesday afternoon. John Pico caught a small piece of board as it floated by and remained in sight some few moments, but suddenly went down. The Negro boy remained for a short time clinging to the keel of the boat as it drifted towards shore, but for some unknown cause lost his hold and sank immediately. The remaining man, Ed Valencia, from whom the facts in detail were received, was discovered alone on the rock at about 10 o’clock by John Pasquel, one of the employees on the island. Being unable to surf the remaining boat alone with the sea that was then running, he returned with all speed to the headquarters in the east end. Early the next morning, Captain Durietz, who had arrived in the sloop Liberty late that evening, Captain Waters, the owner of the island, and Pasquel returned to the west end. A big sea was on and the wind blowing from the northwest. Under the efficient command of Captain Durietz, they were enabled to come quite close to the rock; a line was thrown which Valencia caught and he was soon carried ashore, not much worse for his experience. The men were sealing. The coroner’s inquest over the body of Pablo Valencia was held yesterday morning, and the jury returned a verdict that the deceased was accidentally drowned.”

July 14, 1891 [LAH]: “Santa Barbara, July 13. Struck a rock. A boat wrecked and two men and a boy drowned. Word was brought last evening of the drowning of two men [Pablo Valencia and John Pico] and a Negro boy [Jonny Amos] near San Miguel Island last Monday. The men and boy were in a boat engaged in a seal hunt. They attempted to make a landing while a heavy sea was running. The boat struck a rock, throwing all out, and all were drowned except one man, who was rescued after clinging to the rock for twenty-four hours. The body of one of the drowned men was recovered and brought here in the sloop Liberty.”