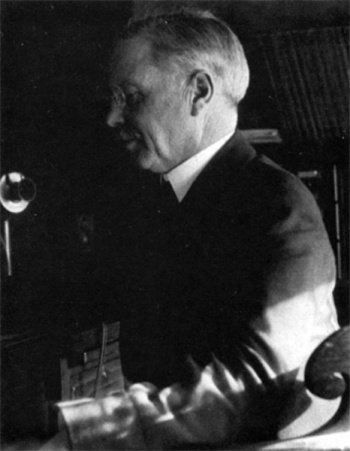 VAN DENBURGH, John (1872-1924), San Francisco-born graduate of Stanford University (Ph.D., 1897) and Johns Hopkins University (M.D., 1902). From an early age, Van Denburgh was a man of multiple scientific interests, known for his careful and industrious research. His first paper was published in The Oologist in 1888 when he was sixteen years old. Beginning in 1895, while in his early 20s, he organized the herpetology department of the California Academy of Sciences, where he served as curator. After receiving his medical degree, Van Denburgh practiced medicine in San Francisco. After the 1906 San Francisco earthquake and fire, he was instrumental in rebuilding the lost herpetology collections of the Academy. In April 1913 Van Denburgh and herpetologist J. R. Slevin collected on Anacapa Island together. In March 1918 Van Denburgh, in the company of California Academy of Sciences colleagues, J. R. Slevin, Joseph Mailliard, and academy director, Barton Warren Evermann, along with fellow ornithological collector J. Eugene Law visited San Clemente, San Nicolas, Santa Barbara and Santa Catalina islands on a collecting trip.

On March 24, 1918 he collected a set of bald eagle eggs on San Clemente Island which are in the California Academy of Sciences (CAS #4673).

Van Denburgh committed suicide while on vacation in Honolulu, Hawaii in October 1924.