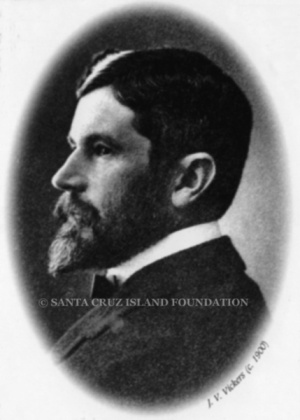 VICKERS, John Van “Jack” (1850-1912), son of Paxson Vickers and Anna Thomas Lewis, wealthy New York Quakers, attended Wyers Military Academy of Westchester and State Normal School. Paxson Vickers died when John was 15, leaving him to manage the family farm and pottery business in Chester County, Pennsylvania. In 1872 Vickers married his wife, Anna Childs, and in 1873, he and his brother Sumner started a tea house in New York known as Paxson Vickers’ Sons. In 1880 at age thirty, John Vickers arrived in Tombstone, Cochise County, Arizona Territory, where he found opportunities in the insurance business, mining claims and real estate envestments. He established the Chiricahua Cattle Company (3Cs), which stretched over 1,658,880 acres and was one of the largest cattle empires in the West. In 1889 Vickers sold a half interest in an Arizona “fenced range” ranch he owned in Cochise County to Walter Vail. This transaction marked the beginning of a mutually beneficial relationship which would result in a century-old partnership of two men and their families. In 1894 Vickers’ vast C3 joined forces with the Vail’s Empire Ranch to form the Panhandle Pasture Company. Vickers returned to Los Angeles in 1898. By 1901 Vail & Vickers began purchasing interests in Santa Rosa Island from the estate of A. P. More. On December 28, 1912, Vickers died in Los Angeles after suffering a heart attack. He left his share of Santa Rosa Island to his wife, Anna Childs Vickers (1854-1945), and their four surviving daughters:

Daughter Lillian (1879-1901) died in a dormitory fire at Bryn Mawr College, which her sister Dora survived. The Vickers portion of Vail & Vickers always acted as a silent partner, while island operations were run by Vails.

December 21, 1901 [LAT]: “Lillian Vickers… was burned to death yesterday at Bryn Mawr College, Pa., where she has been a student… The young woman feared that she was a victim of leprosy, and was rubbing her skin with alcohol, when it became ignited in some unknown manner and in a moment her clothing was ablaze… Miss Vickers lingered for about five hours. Miss Vickers was about 22 years old, and this was her third year in Bryn Mawr. She spent her summers vacationing at Terminal, where her father had a cottage, and was a feature of the social life of the place. She was one of five sisters…”

April 7, 1905 [SBMP]: “The power schooner Santa Rosa in charge of Mr. Vickers, one of its owners, left for Santa Rosa Island yesterday afternoon. A number of vaqueros took passage on the boat for the island where they will participate in a rodeo of cattle. There are at present about 7000 head of cattle. Shipments will soon begin of cattle from the island consigned for Los Angeles and other southern points.”

June 20, 1905 [SBMP]: J. M. Vickers and S. P. Vickers, proprietors of the Los Angeles cattle firm of Vickers & Vickers, arrived in the city yesterday. They are accompanied by William Connelly, a representative of the Maier Packing Company, and C. W. Wells, another cattleman also from Los Angeles. They are stopping at the Arlington. The Vickers Company owns over 2000 head of cattle on Santa Rosa Island which are regularly shipped to Los Angeles markets. It is understood that the deal has just gone through by which the Maier Company has purchased a large number of these cattle for market purposes, and the representatives of the firms are here to complete the work of transferring and shipping the stock. The schooner Santa Rosa Island is expected in from the islands with several carloads of stock within a day or two. Some shipments have been made to San Pedro, but this course has proved to be too slow for the purchasers, and it has been decided to ship from this city in the future.”

July 14, 1905 [LAT/HB]: “President J. V. Vickers was out today with an engineer who is planning the repairs and improvements to the pleasure pier, that was injured in the recent storm.”

May 11, 1907 [SBMP]: “A sad incident was witnessed at the passenger station last evening when the daughter of J. V. Vickers created a scene through refusal to accompany her nurse on the train to Belmont where the young lady has been for some years in a private sanitarium. Recently she was brought to Santa Barbara for an outing on Santa Rosa Island, of which her father is one of the owners. The change seemed to be very beneficial, but on returning to Santa Barbara the girl showed symptoms of her old trouble. Last evening as she was placed aboard the train she attempted to escape from her nurse, first smashing the glass out of the window, with her bare fist, and later as the train was moving, tearing away the curtains and again attacking the sash.”

July 22, 1908 [LAH]: “Spooks may have played as firebugs yesterday morning and set ablaze the so-called ‘haunted’ house at Figueroa and Jefferson streets — long a landmark in the vicinity — but the fire department is more disposed to believe that tramps who found the desereted home a haven had more to do with the origin of the flames. Smoke was discovered about 9:30 o’clock in the morning coming out of the windows of the deserted home. An alarm was rung in as soon as the smoke was noticed, but when the department arrived the flames had gained considerable headway. After a brisk fight with the fire it was extinguished, though not until much of the house had been destroyed. The damage to the place is estimated at about $500. This is fully covered by insurance. The property belongs to John V. Vickers of the firm of Vail & Vickers.”

September 22, 1911 [SBMP]: “Lumber will be used on improvements to be made on island ranch. President John A. Hooper of the Santa Barbara Lumber Company and principal owner of the schooner Comet, recently wrecked on San Miguel Island, was here yesterday and reported the sale of the wreck to Mr. Vickers, of the firm of Vail & Vickers, owners of Santa Rosa Island, adjoining San Miguel. The island company hopes to secure a good portion of the damaged cargo of 650,000 feet of lumber and use it for improvements on their cattle ranges on Santa Rosa. There is also a valuable donkey engine on the Comet, which may be saved, and the other salvage that it is possible to obtain.”

October 3, 1911 [SBMP]: “The cargo and rigging of the wrecked lumber schooner Comet will be brought from San Miguel Island to this city if the plans of Captain Henry Short of the Charm and Captain Waters, owner of San Miguel Island, will be carried out. They are now the owners of the wreck, Vail & Vickers, owners of Santa Rosa Island, having abandoned their option some days ago, after a careful investigation of the stranded schooner. Waters and Short are in the best possible position to handle the wreck, by reason of the facilities at their command. Captain Waters has a number of mules on San Miguel, and they can be utilized in carting the lumber from the shore to Cuyler’s bay, a distance of two miles, where it can be made into rafts, and towed across the channel when weather conditions are favorable. A certain quantity of the cargo can be floated from the wreck itself, just how the wreckers do not care to divulge—being a trade secret. The Comet carried a general cargo of both dimension and finish lumber, and the material will find a ready sale if it can be landed here.”

October 6, 1911 [SBMP]: “The Santa Rosa Island boat arrived yesterday afternoon, with Mr. Vickers, one of the owners, and Frank Pepper, the manager. Mr. Vickers returned to his home in Los Angeles.”

June 12, 1912 [SBI]: “Cattle will be shipped next week from Santa Rosa Island to Los Angeles via Santa Barbara. J. V. Vickers and S. P. Vickers of the Vail & Vickers Company, which owns the island, were here Tuesday on their way to Santa Rosa to take charge of the shipping.”

December 31, 1912 [SBMP]: “J. V. Vickers, owner of Santa Rosa Island, dies at Los Angeles. Well known cattle man and miner drops dead while playing dominoes. J. V. Vickers, who with Walter Vail owned Santa Rosa Island, died suddenly of apoplexy while playing a game of dominoes in his Los Angeles home Saturday evening. Aside from being a member of the cattle firm of Vail & Vickers, he was a director of the Los Angeles Chamber of Commerce, a man of many affairs, and former member of the Arizona legislature. He was largely interested in mines. ‘Its your move,’ he remarked to his opponent in the game as he was stricken. Walter Vail Jr., a son of the late partner in the firm [Vail & Vickers], arrived in Santa Barbara yesterday to visit Frank Pepper, the manager of Santa Rosa Island, now ill at Cottage Hospital.”

February 1, 1913 [SBMP]: The heirs of the late Walter L. Vail, of the firm Vail & Vickers, owners of Santa Rosa Island, have sold their interests to the Empire Land and Cattle Company, the deed going on record yesterday. There are over 66,000 acres in the island, which supports several thousand cattle. Frank Pepper, superintendent of the island, who is just convalescing at the Cottage Hospital, having been ill for several weeks, states that there will be no change in management of the property as a result of the recent death of Mr. Vickers. Mr. Pepper expects to return to the island Sunday.”