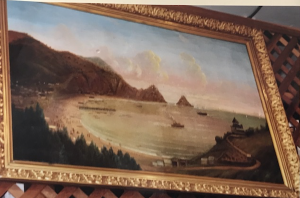 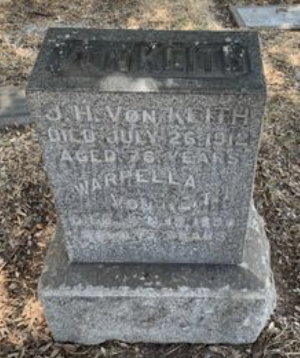 VON KEITH, John H. (1838-1912), was born into wealth in Cambridge, MA on April 10, 1838. Orphaned at age 6, he was adopted by Senator Clark of California. Von Keith attended Harvard University and the Bostobn School of Design. In 1880 he was in Denver, CO, and by 1885 was a resident of Los Angeles. In 1887, he authored Westward or 1000 Items on the Wonders and Curiosities of Southern California, published in Los Angeles.

Von Keith and his wife had five children:

July 2, 1892 [Morning Tribune]: “J. Von Keith, San Francisco's celebrated artist, has several paintings here in Goodrich's on sale. His most prominent painting here is that of the Nun.”

January 3, 1901 [Hanford Journal]: “Professor J. Von Keith of Los Angeles has inaugurated a new industry in Kern County. He is gathering fish bones from the bed of Buena Vista Lake, to be used by sugar factories in clarifying sugar. He has an order for 200 carloads, and has gathered two carloads. The skins of these fish are used for making glue, or to make this story stick. more likely.”

July 30, 1912 [LAH]: “Funeral of painter. Impressive services yesterday marked the funeral of Prof. J. H. Von Keith, whose many beautiful landscape paintings have made him well known in many lands. Services were held in Dexter Samson's parlors, Rev. Will A. Knighten paid a beautiful tribute to the life of the painter. Von Keith came to California in 1889. He was 77 years old at this death.”