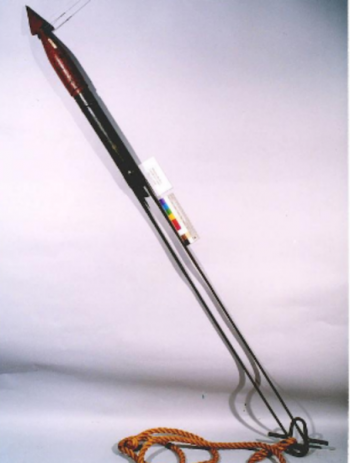 Whaling Harpoon, C. D. Voy Collections
California whaling rocket harpoon of the 1870s-80s, meant to kill whales in a more effective way than hand-held harpoons. Whaling was then an important industry in which whale oil was used for lighting, lubricants, and other purposes. Standard hand-held harpoons were dangerous because they required skill and strength to use and a wounded whale would often strike a whaleboat, destroying the boat and killing the men.
The California Whaling Rocket Harpoon was a modified from the Roys-Liliendahl whaling rocket harpoon developed by the whaling captain Thomas Welcome Roys and Gustavus A. Liliendahl. The California harpoon was used in whaling along the California coast. This harpoon was purchased by the Smithsonian from C.D. Voy in the 1880s.
Manufacturer: Church Fireworks Company
Materials: Overall, cast iron; rope, hemp
Dimensions: 3 in. diameter x 6 ft. 6 3/4 in. long, 28.5 lb.
Rope: 108 in. long
Warhead: 10 lb.
Body: 7.5 lb.
Tail section, toggle and rope): 10.5 lb.
ID: A19730997000

Voy made contributions to several museums, including the Smithsonian, University of Pennsylvania's Penn Museum, and University of California Berkeley.

“1893 - C. D. Voy had made observations on Santa Rosa and San Miguel islands in company with Yates and Blunt some time earlier and submitted a manuscript to the California State Mining Bureau, but it was rejected though the existence of this manuscript is mentioned in the 11th Report of that year.”

VOY, C. D. Santa Rosa Island, 48 pages of manuscript and five full page plates. There is nothing in this which related to minerals. It refers to the discovery of the island, shape, climate, contour, points, anchorage (no harbor), volcanic material, bluffs and ridge sand drifts, mountains, fossils, mammoth remains, topography, ethnography, zoology and flora.

Both of these papers of Mr. Voy show research and would be useful for a geographical or ethnological society. The lithographs for these papers mentioned have been made and printed. Eleventh Report of the State Minerogist, Two Years Ending September 15, 1892 by California Division of Mines and Geology

August 1891 [The Carrier Dove, V.VIII No.8, S.F.]: “Mrs. Ruth Scott Briggs, who presides over the Mediums' Meetings at St. Andrew's Hall, surprised her audience on Wednesday evening, August 5, by her marriage to Charles D. Voy, the ceremony being performed by Dr. N. F. Ravlin. Capt. Scott, brother of Mrs. Briggs, made some pleasant remarks, and Mr. Ravlin briefly expounded the Spiritual idea of marriage, taking occasion also to refer in scathing terms to the insane notion of Koreshan philosophers, who just now are separating families in San Francisco by proclaiming as sinful that which Nature has ordained for the preservation of the race. St. Andrew's Hall was crowded, and Mr. and Mrs. Voy were congratulated by their many friends present.”

December 8, 1895 [SFCall]: “Pathetic story of a generous old scientific collector who died of starvation. Those members of the Academy of Sciences who take a constant and sincere interest in the welfare of the institution are presently immersed in gloom over the fact that they were outwitted recently by the little junta power, and their most praiseworthy endeavors could effect no change for another year at least... The present system of nominating keeps the same coterie of men in power... A pathetic story is told by a prominent member, and it may be used as campaign ammunition. It is that a worthy man to whom the academy was indebted was allowed to starve in his room and finally to die in the County Hospital from the effects of starvation. This old man was well known to University of California men and to all collectors of ethnological relics. He was C. D. Voy, who spent mot of his life in making collections in the South Sea Islands. One collection of his was for the University of California. About four or five months ago he presented a valuable collection of South Sea Island articles to the Academy of Science. These interesting specimens were all stored away in the basement, though several members protested that the collection should be classified or catalogued. The result was that Voy was engaged for three or four months to do this work. After the first month President Harkness dismissed him summarily, and out of the funds old Voy went to his lodgings disheartened. There he remained, and for three days went without food of any kind, until the landlady, Mrs. Poole, found him overcome with exhaustion. He was taken to the City and County Hospital, where he died. With his death was lost the identity of the various ethnological specimens, which still lie in the Academy basement. Without their identification and history they are merely so many curios, without any scientific value whatever.”