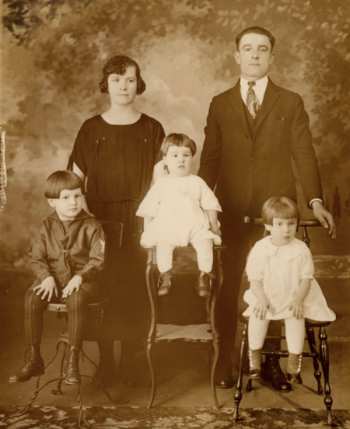 VODOPIA, Sam (c. 1888-1938), fisherman washed overboard off Santa Cruz Island during a storm. He was born in Dalmatia, Croatia and arrived in New York in 1909. His wife, Mary Zuich, was born in Luka, Croatia.

December 17, 1938 [SPNP]: “Return body of fisherman victim of accident at sea. The coast guard cutter Itasca was due here late today with the body of Sam Vodopia, 50-year-old fisherman on the San Pedro purse seiner Harmony who was washed overboard from the boat near Santa Cruz Island at 3 a.m. today. How the body was recovered so quickly or other details of the tragedy were not given in the Itasca's brief radiogram to the base. At request of the coast guard, a police ambulance was to meet the Itasca when she docked at the coast guard base. Mr. Vodopia is survived by his widow and three children at their home, 464 West Seventeenth street. Capt. Catherine Cesareo is skipper-owner of the Harmony. The Itasca, with other boats of the coast guard, were searching for two overdue fishing boats near Santa Cruz Island when Mr. Vodopia was washed overboard. One, the Spartan, overdue at Hermosa Beach since last Wednesday, still missing with three men aboard and an amphibian plane from San Diego has joined the search. Except that one of the men is named Reynolds and Hermosa Beach is his home, the coast guard had no information on the missing boat's crew.”

December 20, 1938 [SPNP]: “The coast guard cutter Itasca was searching today for the body of Tom Endo, San Pedro Japanese fisherman washed overboard from the purse seine fishing boat Johnny Boy off Santa Cruz Island at 12:30 a.m. Death of the Japanese was reported to the coast guard by the victim's widow who was telephoned by a crew member of the fishboat Costa Rica, which has radio telephone equipment. Details of the tragedy had not been received here this afternoon. Endo's death was the second in four days from being washed overboard near Santa Cruz Island, where storm-tossed seas are reported racing high. Sam Vodopia, fisherman on the purse seiner Harmony, of 464 West Seventeenth street perished in a similar manner early last Saturday morning. His body was recovered by the Itasca which was near the scene searching for thew two overdue boats. Earlier last week a Japanese fisherman was washed off his boat and drowned near Point Fermin.”