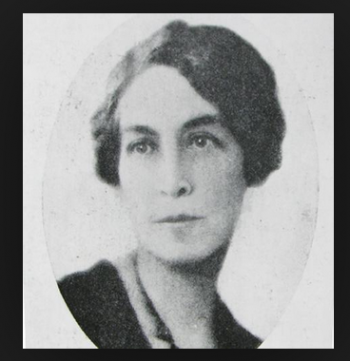 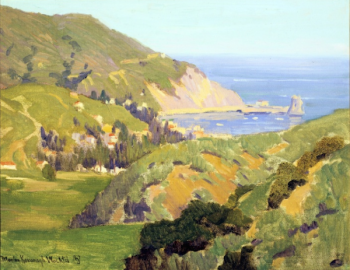 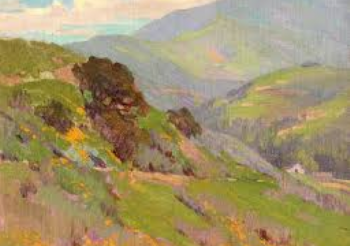 A commission from the Santa Fe Railway to paint scenes in their ticket offices brought her to California. Arriving in San Francisco in 1903, she became a pupil of William Keith. Learning of her proposed move to southern California, Keith suggested that she study with Elmer Wachtel. A romance blossomed, they married and lived in Arroyo Seco near Pasadena in the early 20th century. Her medium of choice was watercolor, but she began painting in oils after her husband’s death in 1929. Wachtel was active in arts organizations, including the California Watercolor Society, Pasadena Society of Artists, the Academy of Western Painters, and the California Art Club.

The view in this Santa Catalina Island oil sketch by Marion Wachtel is looking to the Northwest from an elevation well up the North Canyon Passage above Avalon Harbor. In the distance; across Avalon Bay; is Little Sugarloaf Point showing the first dance hall pavillion that was built in 1920. The distinctive rock formation on the point was dynamited in 1929 to make room for the now famous Grand Casino Ballroom. During the 'teens and 'twenties; the Wachtels traveled up and down the California coast; documenting their trips with numerous plein-air studies/sketches. 'Avalon; Catalina' is one of these works; This unfinished painting is interesting as it demonstrates Marion Wachtel's painting technique. She has filled the entire canvas with the base colors and composition and was in the process of adding the details when her work on the painting terminated. It is also a relatively rare example of her work in oil during this period since; while married to Elmer Wachtel between 1904 and his death in 1929; she painted primarily in watercolor.