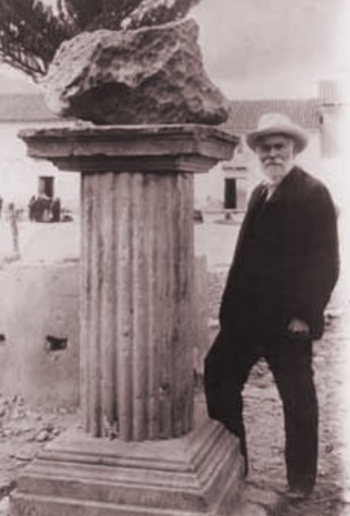 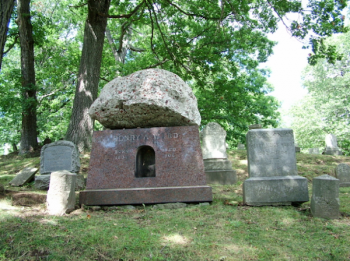 WARD, Henry Augustus (1834-1906), scientist, explorer, museum builder and founder of the Ward's Natural Science Establishment, was born in Rochester, New York in 1834. He studied at Middlebury Academy, Williams College, Temple Hill Academy and Paris School of Mines. In 1860 he returned to Rochester after many years of collecting geological specimens in Europe and Africa. From 1860 to 1865 he taught natural science at the University of Rochester, and began to supply colleges and universities with geological cabinets. This work was the beginning of the Science Establishment. Ward later became interested in meteorites and built up a large collection before his death in 1906 at age 72.

Ward was struck and killed by an automobile while walking across a street. His death was one of the first deaths by automobile. The driver drove away, but the accident was observed by a police officer, and he was later charged with manslaughter. He is buried in Mount Hope Cemetery, Rochester, N.Y. His memorial was designed by renowned architect and spiritualist Claude Bragdon and is topped by a huge jasper-flecked boulder which Ward discovered in Georgian Bay, Canada.

The Henry Augustus Ward Papers are at the River Campus Libraries, University of Rochester, New York.

* NOTE: “...The University of Florida also houses eggs (#1136 and #52321) reportedly collected by W. A. Myers (three eggs—4 March 1880) and H. A. Ward (one egg—4 March 1880), respectively, both of whom were professional dealers in avian specimens. These records, too, are of dubious origin, as there is no other evidence of a visit to the island during this time. The Nidiologist (Taylor 1895) contains a heated letter from editor Harry R. Taylor to a dealer in avian specimens (Walter F. Webb) who had advertised Guadalupe Caracara eggs for sale. Taylor responded "And I may add, that if successful in purchasing any or all of these eggs, I intend to form a syndicate to place an order with you for a series of eggs of the Dodo..." ” [ 2019. Everett, William T. Rollo H. Beck’s Visits to Isla Guadalupe, Mexico, with Additions and Corrections to the Island’s Avifauna California Academy of Sciences Proceedings 65(7):159-180, 2019]