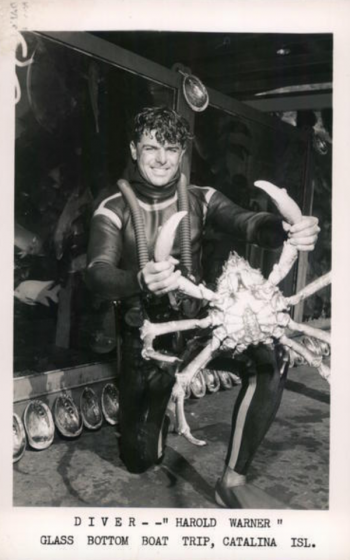 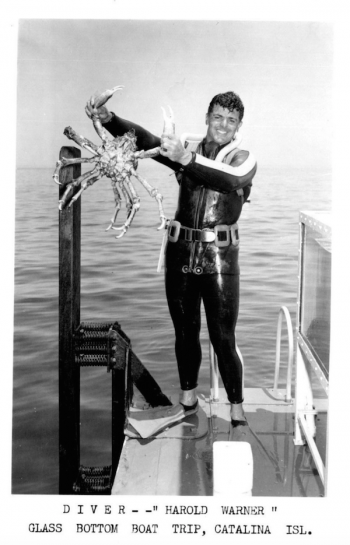 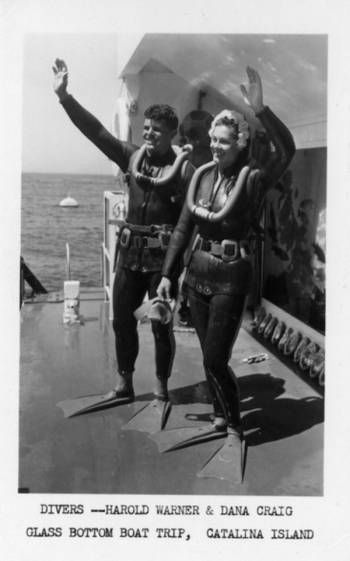 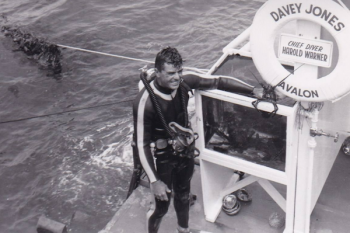 Harold suffered from the bends in a diving accident and was partially paralyzed from the side effects. He lived to be 85 years old.

July 2, 1948 [LAT]: “The sea yesterday claimed the life of Harry (Harry the Monk) Boosinger, 48, the agile Santa Catalina Islander who for 32 years defied death in the ocean as a diver and a film stunt man. Only a diving mask and air hose surfaced before the horrified gaze of his wife, Minta Boosinger, off Lion’s Point, near the Isthmus, when his mooring craft crew hauled up the diving line in response to what they believed a signaling tug on the line. Then followed a frantic three-hour battle to reclaim Boosinger’s body from the ocean which he had defied so often that he was reputed to have a ‘charmed life’... An alarm to Avalon brought Warner, Oscar Griffith, a pioneer glass-bottom boat diver, and constable Tinch Moricich, whose brother Harry once had been rescued by Boosinger. Besides his widow, Boosinger leaves a brother, Leonard, of San Diego, and a sister, Mrs. Esther Roscoe of Los Angeles.”

July 2, 1948 [Long Beach Independent]: “Air Hose Fouls, Diver Drowns. Two Harbors, Santa Catalina Island, July 1. Harry R. Boosinger, 48, famed underwater stunt man, drowned today when his air line became entangled in seaweed while he was testing new diving equipment. The body was recovered from 40 feet of water, by his protege, Harold Warner, 25. Actors John Wayne and Grant Withers, who were aboard a nearby yacht, assisted in the recovery operations. Known as "Harry the Monk," Boosinger was a veteran of countless rescues and adventures during 32 years of Catalina diving. Boosinger and his wife, Minta, were on a holiday trip in their boat, Scout, yesterday when he decided to try some new diving equipment. Weighted with a 30 pound lead belt and mask over his head Boosinger went down in 40 feet of water. Ait was pumped to him from the Scout. His wife became alarmed after 30 minutes and an attempt to bring Boosinger to the surface failed. All that came to the top was his diving mask and hose. Mrs. Boosinger said the veteran diver's doctor had warned him recently not to stay down too long because of a heart condition. Boosinger's biggest exploit during his many years on the island was the saving of three men during the sinking of the glass bottom boat, Emperor, in a storm. William Wrigley, the chewing gum magnate and principal owner of the island, gave him a gold watch for the heroism.”

July 12, 1953 [Independent Press Telegram, Long Beach]: “They Like Their Fish-Eye View. They get a fish-eye view of Avalon visitors. Expert divers Harold Warner and Mary Ann Hawkins glide through the Undersea Gardens at Santa Catalina Island in underwater exhibitions for spectators in the famous glass-bottom boats. Warner, former Navy diver, and Miss Hawkins, motion picture stunt actress, carry their air with them. The wear Aqua-Lungs when they invade the fish world. Around their waists they wear canvas belts containing lead weights which compensate for the buoyancy of the air tanks. Sometimes they make as many as 20 diving trips a day. The Aqua-Lung enables them to stay under water from 20 to 40 minutes. On some dives they attire themselves in rubber suits with a full suit of woolen underwear beneath them for warmth. The rubber suits are a light orange and show up well beneath the surface. Passengers on the glass-bottom boat who have read Cousteau's book "The Silent World" and have seen Jon Lindberg's underwater adventures in "The Frogmen," or who are interested in skindiving, will find particular interest in this particular type of swimming and diving. After their dives, the pair comes aboard the Davey Jones diving barge and gives talks to the spectators. They also show some of the undersea life such as lobsters, sea porcupines and abalone shell. For a girl who has done stunt work in the movies to the extent of putting her arms around a hungry tiger's neck and playfully swimming with an elephant, Miss Hawkins often times is quite timid about undersea life — especially lobster, spider crabs and sea cucumbers. They get a fish-eye view of Avalon's visitors and enjoy studying the glass-bottom boat passengers as much as the spectators enjoy watching them.”

October 3, 1954 [LAT]: “Little did they realize — the handful of Catalina Island glass-bottom boat and coin divers of 50 years ago—that they had originated a sport which one day would have thousands of participants prowling the waters off the Southern California coast from Palos Verdes to Laguna Beach—and off Catalina itself… A number of Duke’s coin and glass-bottom boat diving contemporaries still reside on the island. One is his brother, Frank, with whom he operates the glass-bottom boat Coral Queen. The others are Tinch Moricich, Oscar Griffith, Everett and Pete Adargo and Hernandez brothers, Sam, Marce, Andy and Manuel. However, none has dived for years. At least since the last of the glass-bottom boat diving exhibitions in the summer of 1941, prior to the outbreak of World War II. Of late years underwater exhibitions have been staged by Harold Warner and Al Hansen, aqua lung diving experts who put on a good show amid the fishes and submarine flora.”

February 27, 1959 [LAT]: “Islanders Quick to Boast About Santa Catalina... Many of Avalon's residents are four-generation islanders. The young married set of Avalon includes many couples who first met as school chums in Catalina. Among them are Margaret and Harold Warner, Jr., Aileen and Chuck Ginnett, Harvey and Frances Cowell, Turp and Jean Hall and Deane and Reynolds McCullough...

August 19, 1969 [Long Beach Independent]: “Diver With Bends Is Critical. A 46-year-old Avalon commercial diver was in serious condition in Good Samaritan Hospital in Los Angeles Monday after suffering the "bends" while searching for the body of a drowning victim. Harold Warner was reported unconscious and not responding to treatment after being rushed by helicopter to a hospital Sunday. Sheriff's officers said Warner was stricken with an air embolism while diving in water 200 feet deep off Hamilton Beach on Catalina Island. Warner was with three other divers searching for the body of 41-year-old Jesse L. Jones of Whittier, who vanished while attempting to free the anchor on his boat. Officers said Jones, his wife, Connie, 40, and a friend, 24-year-old William King, Huntington Beach, had been scuba diving shortly before the tragedy. King told officers he developed breathing difficulties and surfaced after more than a half hour. A day-long search by other divers for Jones' body was unsuccessful. The search was continued Monday by helicopter, officers said.”