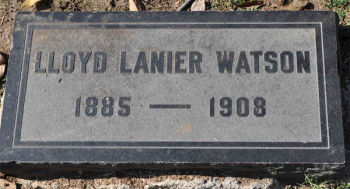 WATSON, Lloyd Lanier (1885-1908), 23-year-old single visitor to Santa Catalina Island who died of injuries suffered from falling off a cliff in the first few days of March, 1908.

March 6, 1908 [Salt Lake Herald]: “Body Found. Missing Hotel Guest on Catalina Island Fell Over Precipice. Avalon, Catalina Island, Cal., March 5.—Mutilated almost beyond recognition, bootless, and with clothing torn to shreds, the body of L. L. Watson, a guest at the Hotel Metropole, who has been missing several days, was found at noon today by two guides on a ledge 1,200 feet below the top of a cliff, and 450 feet above the beach. The position of the body indicates that Watson, while climbing the cliff, fell from somewhere along its face to the ledge where his body was discovered. The body will not be recovered until tomorrow at daybreak. Watson's brother is expected to arrive here from Clifton, Ariz., tomorrow, when the inquest will probably be held.”