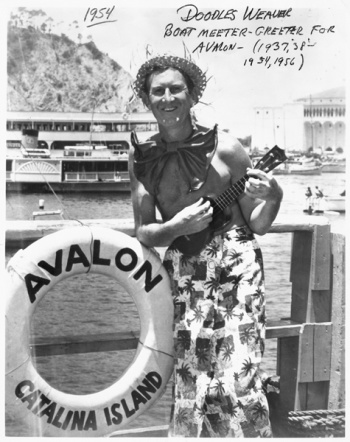 WEAVER, “Doodles” Winstead Sheffield Glendenning Dixon (1911-1983), musician, comedian and actor, and Avalon greeter. Nicknamed "Doodles", he began his career in the 1940s as a comedian on radio and touring with the Spike Jones Music Revue. In 1951, he broke into television with NBC's "The Doodles Weaver Show" going on to appear in on TV shows Batman, Land of the Giants, Dragnet, The Andy Griffith Show and The Monkees. He appeared in more than 90 films, including The Great Imposter (1961), The Birds (1963), The Nutty Professor (1963) and Under the Rainbow (1981). He was the brother of NBC-TV executive Sylvester Weaver and the uncle of actress Sigourney Weaver. Weaver was married and divorced four times; he committed suicide by gun in Burbank, CA on January 17, 1983. He is buried in Avalon Cemetery.

January 18, 1983 [NYT]: “ BURBANK, Calif., Jan. 17— Doodles Weaver, a rubber-faced comedian and musician who helped pioneer improvisational television comedy with his show in 1951, has died of what the police believed were self-inflicted gunshot wounds. He was 71 years old. Mr. Weaver also pioneered comedy recordings in the 50's. One of his best known, Beedlebaum, which was made with the bandleader Spike Jones, was a spoof of a horse-race announcer calling a race in which the horses lived up to their names, such as Bubble Gum sticking to the rail. He also worked with The Three Stooges in short films, and he did a wide range of character roles in films and on television. Mr. Weaver's body was found by his son, Winstead Weaver, of Sun Valley, at the comedian's Burbank home Saturday night. A .22-caliber weapon and about $54 were found by his side, the police said. No suicide note was found, but we did find a 1982 diary with some rather recent entries indicating depression that would be consistent with a suicide, Juan Jimenez, a Los Angeles County Coroner's investigator, said. The Doodles Weaver Show was broadcast on NBC for about three months in 1951. In the show, he sometimes played a country bumpkin, working with a live pig. After the show ended, he starred in a Day with Doodles program in New York City for a short while before he returned to Hollywood, where he had a Doodles Club House show for several years and was host of a children's program on a San Francisco television station for one season. He appeared on The Kraft Music Hall and Hour Glass, another variety show in the late 40's. The fast-talking Mr. Weaver, whose full name was Winstead Sheffield Weaver, played for three years with the Spike Jones orchestra, performing as Professor Feetlebaum. The films in which he performed included Topper in 1937, Li'l Abner in 1940, The Story of Dr. Wassell in 1944, Winchester '73 in 1950 and The Birds in 1963. Among the character roles he played on television was the hotel owner in the Lawman series in the late 1950's. He was a native of Los Angeles. His brother, Sylvester (Pat) Weaver, was a former NBC board chairman. Mr. Weaver was married four times; his marriages ended in three divorces and one annulment.”