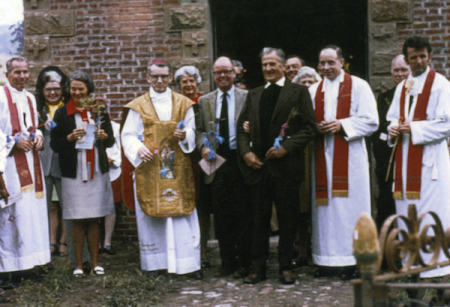 Father Thomas Elewaut of Mission San Buenaventura became Msgr. Weber's successor. He celebrated his first mass in the island's chapel on May 3, 2012.

November 30, 1968 [LAT]: “Tradition of Centuries Maintained by Chapel. Priest Visits Santa Cruz Island, Writes Story of Its 426-Year Christian History. Recently a Roman Catholic priest paid a flying visit to California's most remote and one of its tiniest churches, which tenuously maintains a 426-year Christian tradition in its area. The church is the Hacienda Chapel of the Holy Cross, on the island of Santa Cruz, a name which itself means holy cross. The priest was the Rev. Francis J. Weber, archivist for the Los Angeles Archdiocese. He tells the story of this chapel, and the Christian history of Santa Cruz, in the current issue of the California Herald. Santa Cruz is one of the larger of the Channel Islands, but is thinly populated, except by livestock and wild boars. It lies 20 miles or so off the coast, south of Santa Barbara, is 22 miles long and about 5-1/2 miles wide, with a surface area of 64,000 acres. Its aboriginal inhabitants, oddly enough, were a rather superior race of Indians, perhaps of the Chumash strain, and how they got to Santa Cruz can only be surmised. But they were there when Joan Rodriguez Cabrillo visited the island with a priest in 1542. There is no estimate for the size of its aboriginal population, but in 1805 it and neighboring Santa Rosa Island together held about 1,800 people, it was estimated. Visited sporadically by priests accompanying various expeditions, or on isolated missions, some sort of Christian influence continued down the long decades until the 19th century. "Disintegration of the native race on Santa Cruz occurred more rapidly than it did on the mainland where the missions stood between the Indians and foreign rapacity," wrote Father Weber. By 1830, when the island became a short-lived and unsuccessful penal colony, the Indians no doubt were gone, or fast disappearing. Disease had helped decimate them. "In 1869, Justinian Caire acquired title to the island and built a home there for his family," wrote Father Weber. "Caire asked Bishop Mora of the Diocese of Monterey-Los Angeles for permission to erect a chapel for the use of his family and employees." When the chapel was completed, in 1893, the bishop delegated Father Gaspar Genna to celebrate the first services there, but no regular chaplain was ever appointed because the Catholic inhabitants were far too few. The Rev. Thomas Sherman, son of General William Tecumseh Sherman of Civil War fame, celebrated Mass at Santa Cruz on Christmas Day, 1929. "At the invitation of Dr. Carey Stanton, president of the Santa Cruz Island Company, this writer and two companions flew to Santa Cruz Island on May 3, 1968, to make available the sacraments for those attached to the island's cattle-raising enterprise," wrote Father Weber. He concluded that "there is an alluring yet inaccessible air about that far away 'Chapel in the Sea!'"”