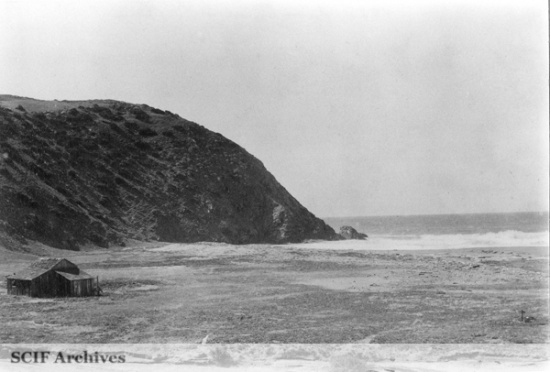 WESTON, Benjamin Stone (1832-1905) was born in Salem, Massachusetts. By 1860 when he was in his late 20s, he had moved to San Pedro, California where he became a corporal of the Second Regiment, California Calvary. During the Civil War (1861-1865) a detachment of federal troops sailed from Wilmington Harbor to take possession of Santa Catalina Island on January 1, 1864. Their purpose was to secure the island for a proposed Indian reservation. Military personnel left the island in September 1864, but Weston stayed to raise sheep at a time the island was divided into several grazing pastures by a few rancher-squatters. A small island cove in the area where he grazed his sheep now bears his name, Ben Weston Beach. Weston bought extensive pasturelands for his sheep in the Redondo area of Los Angeles County. Ben Weston never married. By 1870 when he was 37, he was living with his friend from Massachusetts, William Howard, who was eight years older than he. They lived together for more than thirty years, until Howard’s death just after the turn of the century. Ben Weston died on April 18, 1905 at age 73, and is buried in Wilmington Cemetery, Los Angeles County, next to William Howard.

August 14, 1903 [LAT]: “Catalina revisited by woman pioneer... Among the visitors to Catalina at present is one of the pioneers of the island, Mrs. S. A. Howland, the widow of Captain Howland, who, almost half a century ago, gave his name to the place now known as Howland’s Landing… There were six families on the island at that time… Ben Weston also had a small band [of sheep] on the south side of the island, at what is still known as Ben Weston Beach…”

December 1, 1913 [LAT]: “Redondo. Sale of Weston Ranch revives memory of man who bought it for sheep pasturing purposes. The sale of a portion of the Weston Ranch five miles southeast of here, as part of the total consideration paid by O. S. Weston for the Bryson apartment-hotel, recalls to early settlers the memory of Benjamin S. Weston, a picturesque character who bought the tract nearly fifty years ago. At that time the land was worth but $1.50 an acre, and Redondo Beach and all the surrounding country was in sheep ranches. Weston the elder, an uncle of O. S. Weston, the present owner, had come around the horn from Massachusetts, and bought the land, a tract of 2000 acres, for a sheep ranch. He built a small ranch house and lived there alone, at times going for months with his sheep, looking for pastures. Tiring of a solitary life, he sent for a friend, William Howard, and for many years, until the death of Howard, the two men, ‘Ben’ and ‘Bill,’ as they called each other, lived contentedly on the ranch. When Bill died, Weston went to live with his nephew and his wife, and later removed with them to Los Angeles. But he missed his companion and the beloved ranch sadly. Upon his death nine years ago he left the ranch, now so valuable, to his nephew, a son of Mrs. Julia A. Weston of this city. The land is now valued at $1000 an acre.”

April 4, 1954 [LAT]: “Walteria. Another homes tract seen in pioneer ranch. The last of the historic Weston Ranch will disappear with the development of a $5,000,000 housing development. More than 500 dwellings are proposed for the area covering 105 acres of ranchland. The property, south of the last Weston Hills tract and east of the municipal reservoir, was sold to a construction company by Mrs. Gladys Weston Wheeler. With the exception of the Torrance Municipal Airport, most of the original ranch area has been subdivided. Until 15 years ago, the ranch included the land bounded by Lomita Blvd., Madison St., and the Torrance city boundary. The farmland is the last of the once extensive agricultural holdings operated by Ben Weston in the 1880s. The half-century-old buildings which were the center of the ranch were moved early last years. Farmers displaced by the rapid urbanization of the area have moved their operations to the Peninsula and Orange County.”