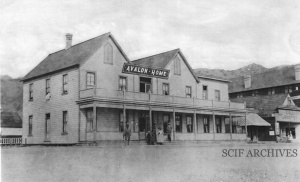 In the summer of 1890, the Wheelers enlarged and improved their hotel. Avalon Home was open year around, with “fish right out of the water a specialty.” Wheeler was a baker by trade. He also operated the grocery store and coffeehouse next to his Avalon Hotel [Avalon Home]. “First-class home-made bread, pies and cakes. Only the best material used,” he advertised. 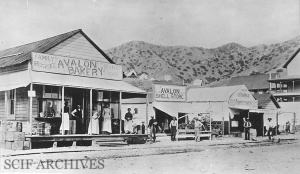 The hardworking Wheeler also owned and operated the schooner Ruby. Millspaugh and Nuttall (Flora of Santa Catalina Island) report that “Mrs. S. A. P. Wheeler was particularly interested in botany and acted as a guide or advisor to most of the visiting collectors of that period.” They were not able to “secure data concerning her collections.”

In 1903-07, Sophia Atwood Pool Wheeler was an active member of the National Education Association and curator of the Antonio F. Coronel Collection, Chamber of Commerce. The Coronel collection became the basis for the Natural History Museum of Los Angeles. Sophia lived on: Brookyn Ave., Los Angeles; 2103 E. lst St., Los Angeles; in 1937 she lived in Baldwin Park with her daughters. March 11, 1937 [TI/Avalon].

[1888] July 1, 1937 [TI/Avalon]: From a letter written by the Misses Geneva R. and Annie L. Wheeler at the time of Sophie Wheeler’s death. “… In 1888, somewhat worn by hard work, [Mr. Wheeler] bought the schooner Ruby, in which they sailed down the coast, encountering a fearful gale at Point Conception, but coming into quieter waters among the Islands. Rounding the east end of Avalon Bay, Mrs. Wheeler’s attention was arrested by the septosyne, with its striking yellow flowers against the cliffs, and seeing the charming little bay said, ‘Let us come here.’ Mr. Wheeler bought the first lot to be used for business purposes. The brick oven he built there has been only recently demolished. It long remained in the store on Crescent Avenue… Mrs. Wheeler taught the very first private school in her home, with two pupils, thirteen weeks, from some time in October 1888. She had reported some plants to the California Academy of Science in San Francisco. To her were directed the botanists and scientists coming to the island. Among them were Prof. Sargent of Harvard and the Arnold Arboretum; Dr. Dill of the Smithsonian, who took a cross section of the famous Lyonothamnus back with him. Among those to whom she was an inspiration in this study was Mrs. Blanche Trask, internationally known for her work on the flora of the islands, and for her shell and other collections. The “Sweet Sophia,” a Crossosoma, a rare shrub, related to the buttercups, was named in honor of Mrs. Wheeler, whose favorite bloom it was. In 1888 Avalon was made a voting precinct. The voting at the time was held in the Hotel Metropole. The first vote showed that 18 or 19 voters were there. The results of this vote were carried to the authorities on the mainland by Captain Wheeler on his schooner, Ruby. When they were ready to set sail they tried to hoist the anchor, but it would not come up. Three hours of hard work, and the combined efforts of all the men on shore were required before it came in sight, and then, to their amazement, it had hold of another anchor weighing 800 pounds, which it had picked up on the bottom. Much surmise has resulted as to what ship it belonged. Many think it was lost from the steamer U.S.S. Hassler; but by others it is questioned as to whether that vessel ever was in the harbor. When later on the Ruby was sold, the anchor of mystery went with it, and when the vessel went on the rocks at San Clemente some time later in a fog, all was lost.”