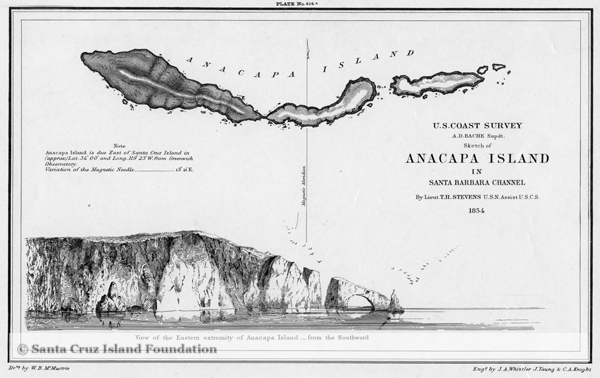 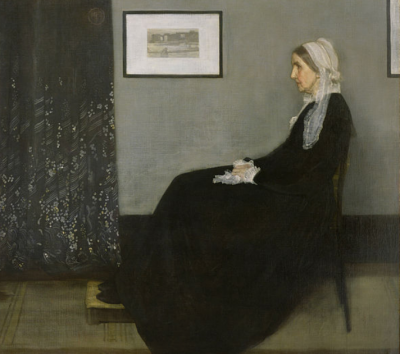 WHISTLER, James Abbott McNeil (1834-1903), Massachusetts-born artist known for his famous portrait of his mother. From November 1854 to February 1855 he was employed by the U.S. Coast Survey as an engraver at the salary of $1.50 a day. As such, he was assigned the task of preparing an engraving of East Anacapa Island based on a hand drawn sketch done by a Mr. McMurtrie for Captain T. H. Stevens, Lieutenant Commander of the Ewing. Whistler never visited Anacapa nor any of the Northern Channel Islands. In completing the assignment, he took artistic license and added a number of seagulls to his work.

“Surely the birds don’t detract from the sketch. Anacapa Island couldn’t look as blank as that map did before I added the birds.”

Previously Whistler had received a warning for taking liberties, and shortly after the Anacapa Island assignment he resigned. The 1854 version of the map shows seagulls above Arch Rock. When the map was reprinted two years later (1856), the birds were omitted. An original of Whistler’s Anacapa Island engraved with the seagulls is highly prized by collectors.

February 12, 1922 [LAT]: “Among the dozen or so etchings by Whistler are found some of his finest work. Whistler was original from the beginning, a law unto himself. His career starts with his being dismissed from the United States Coast Survey for having etched some head on the copper instead of a map of Santa Cruz Island. His art is one of suggestion, the things he leaves out are as important as those included…”

June 20, 1939 [Key West Citizen]: “Fired from a $1.50 a day job and becomes a famous master. Those who love the work of James Abbott McNeill Whistler will be interested in an article which apparently appeared recently in the Philadelphia Inquirer, and which throws additional light on the artist, and shows that a delicate little map of an almost unknown island, recently unearthed from the dusty files of the Coast and Geodetic Survey in Washington, has brought vividly to light the struggle and talent of one of the greatest masters of the art of etching the world has ever know. The Coast and Geodetic Survey today prizes its short association with James Abbott McNeill Whistler while it blushes over its treatment of him back in 1854. The map recently discovered is an etching, titled Anacapa Island. It is the map that cost Whistler his $1.50 a day job, kicked him out of the service of the United States and sent him to Paris to become one of the world's greatest painters and etchers. Here is the story: Whistler had been discharged from West Point after an argument with a professor, and was refused admission to Annapolis because of age requirements. He finally got a job with the Coast and Geodetic Survey in Washington where he was engaged to draw maps of islands, reefs and harbor entrances for the guidance of mariners and naval officers. His penmanship and his skill in etching were noted by his associates. He was twenty-one and he hated cold lines to exact measurements. He sought to inject a little beauty and human interest into the drawings. It was his habit to complete his work and then liven it up by adding tiny porpoises, or flying fish, or perhaps the head of a whale, or a flock of wheeling gulls. In vain the pompous and exacting officials railed at the young artist for presumption in decorating official topographical charts. Late in 1854 he was detailed to make an etching of Anacapa Island in Santa Barbara Channel, California. Two youngsters, J. Young and C. A. Knight, shared the work of making the plate with him, but , students of art claim, the touch is entirely that of Whistler. When the drawing was finished he idly added two little flights of gulls wheeling over the eastern end of the island. The copper plate was finished and printed in the report of the Survey in 1855. When the print appeared, Captain Benham, his superior, angered by the decorative touches, discharged Whistler. He went to Paris, bearing his orchar's stylus, to become the world's most famous etcher. But for those wings flashing over the island, the world today might be without his famous "Mother"—and Washington would lack the greatest collection of his etchings in the world, housed in a magnificent museum not far from the place where he toiled for $1.50 a day, a copy of which is to hang with his famed "Annie Hayden" and "Weary", "Necturn" and Balconyt", valued at from $4,000 to $5,000 each. Whistler's whimsicalities, and his hatred of conventions, which made him notorious in Paris and London later, was evident even in the days of his youth. Joseph Pennell, the famous art critic, wrote that Whistler was indifferent to any work except that which interested him and that it was impossible for him to refrain from putting life into anything he drew. He loved to tease and to scandalize the martinets of the bureau. Captain Benham was Whistler's father's friend and the young artist was his protege; yet upon him Whistler directed his mischievous talents. Each artist was furnished with a magnifying glass to use in scratching the tiny lines on the copper plates. Whistler impishly etched his own portrait in the form of a tiny devil on his glass, and when Captain Benham looked through it to criticize a map, he beheld, instead of a coral reef, a mocking little devil that looked exactly like Whistler grinning at him. He confiscated the glass. years later, an elderly man called at Whistler's famous studio in Paris. Instead of a calling card he sent in a tiny watch charm of glass set in gold. Glancing through it Whistler shouted in delight. "We recognized each other perfectly", he said of the minute imp as he shook hands with Captain Benham, his caller. Washington having kicked Whistler out, now pays him the highest honors. In the Freer Gallery, donated by Whistler's friend and patron, Charles R. Freer of Detroit, is the largest collection of Whistler's works in existence. There are also 683 original Whistler etchings, scores of drawings and many paintings in water color and oil. Hidden somewhere in the lines of his etchings are tiny gulls or butterflies. The butterfly became his signature; but on each picture, he put wings—the symbol of his genius in flight.”