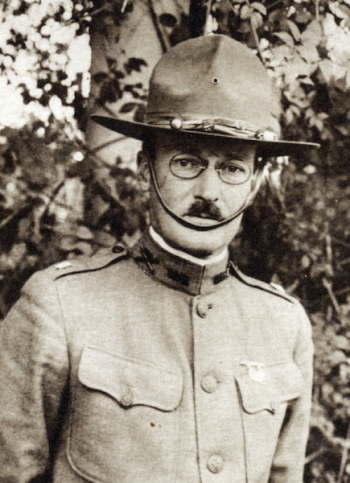 WHITE, Stewart Edward (1873-1946), a man of privileged upbringing, he became well-known prolific author, celebrity and Santa Barbara resident in the early decades of the 1900s. White was introduced to Santa Barbara in 1884 when his family began wintering at the Arlington Hotel. He was 11 years old at the time. The family settled in Santa Barbara in 1903 in a house on the northeast corner of Santa Barbara and Islay streets. White was an avid camper, fisherman and hunter, subjects about which he often wrote. He penned more than forty books, and became a friend of Theodore Roosevelt. White’s novel, The Rose Dawn, takes place in a fictionalized Santa Barbara. White married Elizabeth Calvert Grant in 1904, and they built a house on the corner of Santa Barbara and Los Olivos streets. In 1916 the Whites moved from Santa Barbara to Hillsborough on the outskirts of San Francisco, in part to escape their constant stream of visitors. Elizabeth White died in 1939, and Stewart Edward White died seven years later at 73.

September 18, 1904 [SBMP]: “Stewart White, the well-known Santa Barbara author, left on Friday with his bride and others for two days' explorations on Santa Cruz and Anacapa islands. They made the trip in Henry Short's power launch Chispa... West Thompson, who accompanied Mr. and Mrs. White on their recent journey in the mountains, will accompany them on their present trip.”

September 30, 1904 [SBMP]: “Stewart White, the well known author, and West Thompson have returned from a two weeks' camping trip on Santa Rosa Island... They brought back some fine tusks taken from several large wild boars which they shot there.”

June 15, 1907 [SBMP]: “Although a strenuous blow on the channel yesterday afternoon was not favorable for fishing, Stewart Edward White, Mrs. White and Samuel Hopkins Adams enjoyed hugely the experiences of a trip down the channel in Captain Gourley’s launch Vamoose, and the run back from off Rincon, in the face of a nor’east blow. Both of these celebrated authors and Mrs. White, as well, proved admirable sailors.”

September 15, 1909 [LAT]: “Lost on one of the many little canons on San Clemente Island, with no water and but little hope of being found by other members of his party, Senator Flint spent a very unpleasant afternoon Monday. The experience was one that will be pleasant to relate back in Washington this coming winter, but at the time the novelty of being at the bottom of a fissure, in the mountain and night coming on, was anything but pleasant. Senator Flint was a member of a party composed of Gifford Pinchot, United States Forester; Stewart Edward White, a well-known California author of Santa Barbara, and Charles F. Holder. As the guests of Robert S. Howland, lessee of San Clemente Island, they went there some time ago to enjoy the excellent fishing afforded in the waters of the various bays and inlets...”

September 17, 1909 [LAT/SCat]: “…This was the greeting accorded a little boat party that broke in upon the slumbering camp of Forester Pinchot and his companions, Pardee and Holder, at Mosquito Harbor, San Clemente Island, shortly after midnight this morning… For two weeks, the party, which, until last Monday, included Senator Flint and Stewart Edward White, has been exploring, tramping and fishing in and around San Clemente Island. They have seen spectacular sights…”

September 23, 1909 [LAH]: “Slay six goats with revolvers. Pinchot and S. E. White are crack shots. Chief forester tells of adventures he and noted author experienced while staying at Catalina Island. A tale of truly noteworthy revolver shooting under trying circumstances was related by Gifford Pinchot last night, with Stewart Edward White, the novelist, as the hero. Mr. Pinchot incidentally made himself out a fair shot, although in a most casual and accidental manner. According to the chief forester he and White had several enjoyable adventures together while they were at San Clemente Island, with former governor Pardee and Senator Frank Flint. On one occasion, late in the afternoon, the two men went out for a climb, scaling the highest peak on the island and overlooking the sea on both sides. The downward trip was commenced well along toward dusk and it was then the pair began to see goats… White got four goats, with a .38 Special revolver (in a large frame) and Mr. Pinchot bagged two, his gun being a .44 regulation. Pinchot says Mr. White got two of the goats at better than 200 yards, one of them while the beast was leaping from one rock to another…”

September 24, 1909 [OC]: “Stewart Edward White returned Tuesday from Los Angeles, having spent the past two weeks in company with Senator Frank P. Flint and Chief Forester Gifford Pinchot, fishing off San Clemente Island. Mr. White reports excellent that the party had excellent sport and landed some specimen fish, says the Press. Mr. Pinchot will arrive in Santa Barbara next Wednesday and will be the guest of Mr. White for four or five days, while he is inspecting the local forest reserves…”

July 24, 1910 [SBMP]: “Theodore Roosevelt, Jr. yesterday opened the rod and reel fishing season in the Santa Barbara channel by capturing the first albacore. It was a good sized fish, weighing probably fifteen or twenty pounds, and giving amateur fishermen a half hour’s very strenuous work with the 12 ounce tackle. Yet he was very greatly ‘dee-lighted.’ Mr. Roosevelt was accompanied by his bride and by Mr. and Mrs. Stewart Edward White, who have been their companions on a number of pleasant outing trips since their coming to Santa Barbara a month ago. The trip was made in the power yacht Charm, Captain H. S. Short, and the boat went twenty miles into the channel, nearly to Anacapa Island before the schools of albacore were found. And then such numbers of them! It seems that the channel fish have been waiting for Teddy, Jr. to coax them from their hiding places in the deep, for the fishing until yesterday has been notoriously poor this summer. The Roosevelt-White party brought in several albacore. The Charm left its distinguished passengers at Stearn’s Wharf late in the afternoon, all of them expressing pleasure with the cruise, and none of them having been the least bit seasick.”

December 23, 1910 [SBMP]: “When Theodore Roosevelt visits Southern California about the first of March, he will spend at least three days in camp on San Clemente Island, fishing in company with Charles F. Holder and former Governor George C. Pardee. Mr. Holder, who is a close friend of the former president, is the discoverer of San Clemente Island as a fisherman’s paradise and makes camp there at least once a year. He has introduced many of his friends to it, and Stewart Edward White, Gifford Pinchot, Frank P. Flint and others have become regular habitués...” [Note: Pardee, a Republican, was 21st governor of California. He served from 1903-1907.]

November 23, 1915 [San Pedro News Pilot]: “Launch Old Glory wrecked at Avalon During Hard Northeast Blow. A real "norther" visited the bay Saturday morning, blowing up in a few minutes at about 7 a.m. Little damage was done, but the Cabrillo was turned around in mid-channel with nearly 300 passengers aboard and returned to San Pedro. At about noon the launch Old Glory, owned by M. C. Bort, came ashore near the pleasure pier and turned over, wrecking all upper works, but was promptly pulled high and dry by block and tackle. The boat will be refitted and put in commission again in the spring, having been purchased by Fred Bort. The Old Glory is considered one of the best of the old model of fishing boats and many of the later boats were patterned after her. She is about 14 years old and was formerly named the Fortuna, the Black Cat, and the Lorena. She has seen much service under Julian Arce and Mexican Joe with many prominent people as anglers. One of the best remembered trips was about nine years ago when Mexican Joe went to Clemente to fish with a party composed of the late Dr. Holder, Governor Pardee, Stewart Edward White, Gifford Pinchot and Senator Flint. The boat was towed over by George Michaelis, but Joe brought her back alone after the fishing party left for home.—Avalon Wireless.”

September 5, 1916 [SBMP]: “The coroner’s inquest on the remains of Wesley Thompson, who was found dead in a canyon at Pelican Bay… The remains were brought over in the Sea Wolf Sunday afternoon, and they were buried in Santa Barbara Cemetery yesterday… The news of Mr. Thompson’s sad fate, first given in these columns in last Sunday’s issue, was received in sorrow by many of the old citizens of Santa Barbara who remembered the deceased as a guide for Stewart Edward White’s great hunting tour in the Sierras a few years ago, which the famous author of out-of-door tales perpetuated in his subsequent writings.”