Difference between revisions of "WHITE-CROWNED SPARROW" 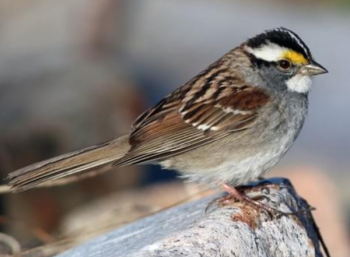 There are currently five recognized subspecies:

1927 Anacapa Island: “Zonotrichia leucophrys gambelii Gambel Sparrow. Abundant in the dahlia thickets on both Prince Islet and on the main island.” [“Through the generosity of Mr. Silsby M. Spalding who placed at our disposal his splendid cruiser Padariva I the writer accompanied by H. W. Carriger, Dudley DeGroot and 0. W. Howard was enabled to spend the period from March 25 to April 5, 1927, inclusive, among the Channel Islands off the coast of southern California.”]
Pemberton, J. R. Additions to the known avifauna of the Santa Barbara Islands The Condor 30(2):144-148, March-April 1928

1905-1906 Santa Catalina Island: “Zonotrichia leucophrys gambeli. Intermediate Sparrow. Quite common in the washes. As they are known to be an abundant winter visitant a probably the bulk of them had gone north before my arrival.” [“These notes are the result of two brief sojourns on Santa Catalina Island in the month of April, eight days being spent in 1905, and five in 1906. Fortunately both trips were made after wet seasons; the hills were carpeted with grass, flowers and insects were abundant.”]
Richardson, Charles H., Jr. Spring Notes from Santa Catalina Island The Condor 10(2):65-68, March 1908

1920 Santa Catalina Island: “Zonotrichia leucophrys nuttalli Ridgway. Nuttall Sparrow. A female of the year was taken at Camp Banning, Santa Catalina Island, January 29, 1920. This is apparently the first record for Santa Catalina. This form has already been recorded by Hoffmann from Santa Cruz Island (Condor, XXII, 1920, p. 187). We found it fairly common on that island during March, 1920, and collected several specimens.”
Dickey, D. R. and A. J. Van Rossem Additional notes from the coastal islands of Southern California The Condor 25(4):126-129 July 1923

1898 Santa Cruz Island: “Many Intermediate Sparrows (Zonotrichia leucophrys intemedia) frequented the corrals and yards, but were mostly in a sadly moulted plumage, preparing for their spring migration... Following is a list of birds observed during my stay:- Intermediate Sparrow (Zonotrichia leucophrys intermedia);... ”
Mailliard, Jos., Spring Notes on the Birds of Santa Cruz Island, Cal., April,1898 The Condor 1(1):41-45, April 1899

1907 Santa Cruz Island: “Zonotrichia leucophrys gambeli. Intermediate Sparrow. Common everywhere.” [“At 11:30 p.m., November 19, 1907, my father (H. Linton), Mr. George Willett, and myself left San Pedro harbor in a dilapidated fishing smack and in company with a crawfisherman, one “Cold-foot” Jorgensen. We arrived off the south end of Santa Cruz Island at 10:30 the following day during a stiff norwester. For various reasons we were unable to make camp until the 22nd. It may not be amiss to state here that twice during the blow we were nearly wrecked: once while at anchor in Potatoe Harbor, a broken anchor allowing the boat to drift within the breaker line and nearly onto the rocks. In this instance the timely arrival of Willett and H. Linton in a small boat, saved the day, and incidentally the fishing smack. At another time (the engine having broken down) we were blown nearly onto the rocks of Anacapa Island; but with father at the wheel and Willett and I on the “sheet” we managed to hold her off. I mention the foregoing, and the many sleepless nights spent on the rocky shores, “running” the surf several times each day (with attendant duckings), etc., merely as a warning to those who seem inclined to believe a field naturalist’s life “strewn with roses”. (Its ’ generally strewn with cacti!)”]
Linton, C. B. Notes from Santa Cruz Island] The Condor 10(3):124-129, May 1908