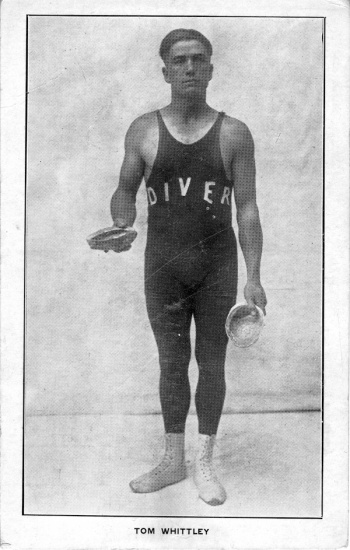 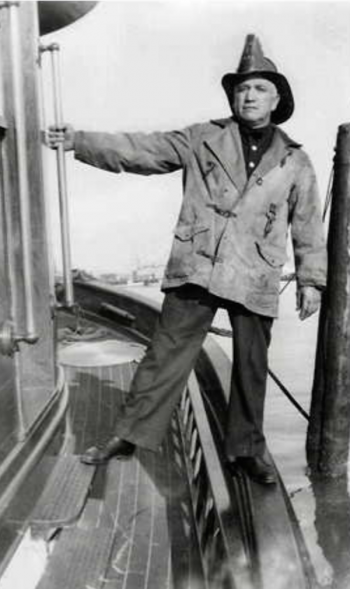 WHITTLEY, Thomas “Tommy” William (1882-1973), native Santa Catalina Islander who was born at the Isthmus at the Civil War barracks on January 22, 1882. He was the son of Frank “Pancho” Whittley (1848-1902) and Manuela Adargo Whittley, and grandson of his namesake grandfather, Thomas William Whittley (1816-1870). His father developed Middle Ranch, and by age 13 years Tommy was breaking horses at Middle Ranch. At age 15 he worked at the Catalina Country Club, building greens for the golf course. He appeared in a number of motion pictures for the Lasky Studios, in which he gave exhibitions of diving and swimming. Tommy Whittley became captain of Fireboat #1 in San Pedro harbor. On October 26, 1912 he married Sarah Jane Graeff in San Francisco, and they had four daughters:

February 19, 1902 [LAT/SCat]: “Avalon. Tommy Whittley came near losing an eye Sunday. He and a young woman were amusing themselves by scuffling over the possession a stick, when by the sudden releasing of the hold of one of them the end of the stick was jabbed into Tommy’s eye, almost gouging it from the socket. Dr. Peckham, who treated the wound, thinks it will come out all right in time.”

April 29, 1904 [LAT]: “Avalon. Two young men, Bob Roberts and Tommy Whittley, arrived here this morning from San Clemente in a small skiff. They left at midnight last night, and rowed in a nasty sea that several times filled their little craft half full of water at a single dip and kept them bailing a good portion of the time. They were impelled to come by urgent business. The schooner Santa Rosa Island was due to arrive at San Clemente to carry away a cargo of sheep last Saturday. The sheep were corralled and had been waiting five days and the boys were dispatched here to send a wireless message to the vessel’s owners to learn the cause of the delay. Before noon they received the information that the schooner got stuck in the mud at San Diego on Friday and had not yet gotten off.”

July 6, 1904 [LAT/SCat]: “Avalon. The marine tugs of war, yesterday afternoon was as spirited and exciting an event as an enthusiastic sportsman could desire… There were five rowers in each team, the winning team composing Mexican Joe, Hawley Farnsworth, John Robarts, George Michaelis and Alex Adargo. Opposing them were Tommy Whittley, George Farnsworth, ‘Chappie,’ Staples and Lindscow…”

April 8, 1905 [LAT/SCat]: “Tommy Whittley, skipper of the schooner Edith, belonging to the San Clemente Wool Company, which plies between San Clemente Island and San Pedro, has returned from an adventurous trip. Tommy is as fearless a dare-devil as ever trod a deck and he refuses to be dismayed at anything in nature. Last week he left San Pedro on one of the stormy days and when he passed Avalon was scudding before the wind hitting only the high places. When San Clemente was reached the wind had subsided somewhat, but during the following night again rose and he was obliged to run around the south end of the island to Smugglers’ Cove for shelter. Then the wind veered and drove him out again, the huge waves pounding him unmercifully, and finally breaking his main boom and disabling the vessel entirely. For two days he and his crew of two men drifted about at the mercy of the waves without a bite to eat or a drop to drink until they went into San Diego Bay where they found shelter and food, and patching up things again, made for San Pedro. Today the Edith will take over some thirty or forty sheep shearers for the spring shearing.”

May 4, 1905 [LAT/SCat]: “Avalon. The schooner Edith, Captain Tom Whittley, owned by the San Clemente Wool Company, touched here this morning, having a cargo of bucks to be turned loose on San Clemente Island. They were Shropshires from George Carson’s Dominguez Ranch. The Edith took on a wagonload of nuts and fishing paraphernalia belonging to Frank Josephs, an old Catalina fisherman, who with a fishing crew goes over under a six months’ contract to fish for the new cannery established on San Clemente by a firm of Japanese. The fish company proposes to take and can any kind of fish brought there, from a sardine to a jewfish or whale—even the despised shark receiving attention for its fins and tail. The cannery has a capacity of 2500 pounds of fish per day.”

May 16, 1906 [LAT/SCat]: “Avalon. The power schooner Edith, which plies between San Clemente Island and San Pedro and belongs to the San Clemente Wool Company, had a singular accident a few days ago. She lost her propeller while out in mid channel between here and San Pedro. In some inscrutable way the coupling became disconnected and a large part of the shaft and the propeller parted company with the ship and dropped into the sea. Fortunately the Edith is rigged with sails and her skipper, Tommy Whittley, is a good sailor, so the schooner is still doing business under sail while waiting for repairs.”

November 28, 1906 [LAT/SCat]: “Avalon. The sloop Frances, of Santa Barbara, which went ashore at Howland’s in the storm of the 19th inst., is having a run of bad luck. On Wednesday after the accident, she was pulled off the beach by Tommy Whittley, and anchored a little way out where it was thought she was safe. In less than three hours after she was gotten off another northeast storm came up quite unexpectedly, and the Frances was again driven ashore on almost the exact spot from which she had been rescued, and she now lies there the prey of the waves, should another northeaster come at high tide. Yesterday the island was visited by quite a storm, but it was at low tide and did little harm to the wrecked boat.”

March 31, 1914 [TI/Avalon]: “Captain Tom Whittley has taken command of the launch Magic Isle for the summer. The boat is to be thoroughly overhauled.”

August 11, 1914 [TI/Avalon]: “It took only a matter of thirty minutes in Recorder Dye’s Court for the twelve jurors to decide from the evidence adduced in the case of the People vs. T. R. Whittley, as to whether the defendant was guilty or not…the Court imposed a sentence of sixty days in the county jail, without an option of a fine…”

November 30, 1915 [LAT]: “Smoldering ruins and ashes where beautiful Avalon stood. Over half of island city is destroyed by flames. Estimated loss of half a million dollars, wrought by possible incendiary blaze. Dramatic scene as victims flee in night. Two hundred persons are homeless as a result of a fire, supposedly of incendiary origin, which reduced more than half of Avalon to ashes early yesterday morning, causing property losses, which are estimated by officials of the Santa Catalina Island Company at $500,000. More than half of the property was uninsured. Between the waterfront and the wireless station and Metropole Avenue, the famed Pilgrim’s Club, and the equally famed Tuna Club are all in ashes, while only the chimneys are left of the homes in the exclusive Grand View tract. But in spite of a time of delirium, there were no injuries. Even Thomas Whittley, who jumped from the second floor of the Hotel Rose, escaped with minor bruises. The exact origin of the fire is problematical, though believed to be the work of an incendiary. At 10 o’clock, Sunday night, a blaze was discovered in the unused property of Jacob Willy, No. 200 Eucalyptus Avenue. The volunteer fire department turned out, but found the flames beyond control…”