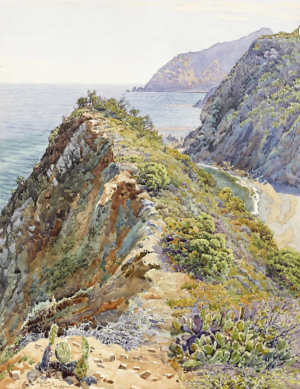 Catalina Island
signed and dated '21
watercolor on paper
view from a knoll on west side of Hamilton Cove, looking towards Descanso, then Casino Pointt (w/Little Sugarloaf showing (later dynamited for casino) and Lovers’ Cove in the distance. 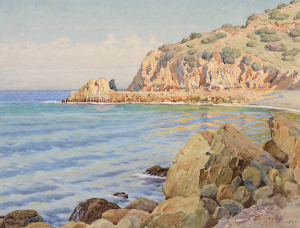 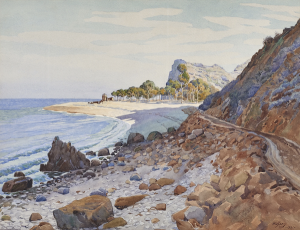 WIDFORSS, Gunnar (1879-1934), was a Swedish American artist who specialized in painting subjects from the wilderness in watercolor. Widforss is most frequently associated with landscapes from American National Parks. He arrived in California in 1921, the same year he painted on Santa Catalina Island.

By the late summer of 1921 he had consigned his watercolors to San Francisco's Gump Gallery and was painting and exhibiting in Carmel. Thereafter, he had successful exhibitions in: Los Angeles at the Stendahl Galleries and the California Water Color Society; the East Bay at the Oakland Art Gallery and Hotel Oakland; and San Francisco at the Rabjohn & Morcom Gallery and regularly at Gump's. According to the U.S. Census in April 1930, he resided as a lodger in the San Francisco home of Théophile Fritzen and was an unmarried landscape artist who officially became a naturalized citizen of the United States in 1929.

In 1934, Widforss was diagnosed with heart disease and told to avoid the high altitude of Grand Canyon Village. He died not long after on November 30, 1934 at the South Rim of a heart attack at the age of fifty-five. He was buried by his friends in the Grand Canyon Pioneer Cemetery on the South Rim. His estate contained over 150 finished and unfinished paintings.