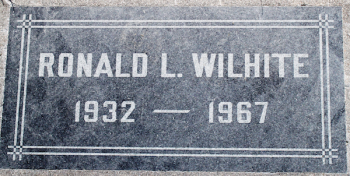 September 24, 1967 [San Bernardino County Sun]: “Sun-Telegram photographer photographer Ron Wilhite dies. Ronald L. Wilhite, award-winning San Bernardino Sun-Telegram photographer, died yesterday morning while taking part in a scuba diving class off Catalina Island. Witnesses said Wilhite, 35, was taking off his scuba gear after coming up from a dive when he collapsed from an apparent heart attack. The Los Angeles County Coroner's Office had no further information on the cause of death as of last night. Wilhite, who resided at 642 E. Jackson St., Rialto, was a member of the YMCA scuba class, which was on an excursion at Catalina. Services for Wilhite will be held at 11 a.m. Tuesday at Stephens and Bobbitt Memorial Chapel, with the burial at Montecito Memorial Park. Dr. Richard M. Mussen of the First United Presbyterian Church will officiate. After he collapsed on the deck of the boat, companions tried to revive him with heart massage, while a doctor on a nearby boat was being summoned. The doctor, however, could not revive him. Just three weeks ago, Aug. 28, Wilhite had a close call while scuba diving, when he got tangled in kelp and was hospitalized for a week. He had just completed a scuba diving course at the YMCA. Whilhite is survived by his wife, Charlotte; two sons, David and Gerald; a daughter, Janet, and his mother, Mrs. Maude R. Wilhite. A native of Long Beach, he came to The Sun-Telegram 14 years ago. He was the winner of more awards than any member of The Sun-Telegram photography staff, including dozens of first prizes in the Twin Counties Press Club's annual competition. He also won contest prizes from the California Press Photographers Association and the California-Nevada Associated Press. He was also a former TCPC president.”