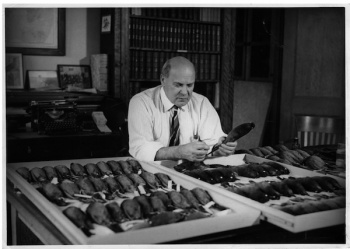 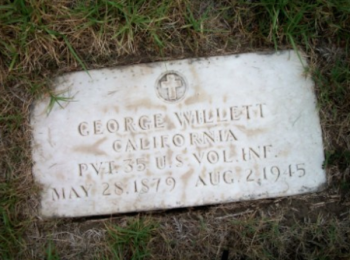 WILLETT, George H. (1879-1945), Canadian-born ornithologist who was active collecting birds on the California Channel Islands between 1904 and 1941. He collected at least 450 birds from various islands, and was the principal ornithologist during the Los Angeles County Museum’s Channel Islands Biological Surveys in 1939-1941. He was the oldest of three sons born to Reverend George Willett and Hannah Theodosia Hill, a teacher. In April 1888 the family moved to Redlands, California where Reverend Willett became the first minister of the Congregational Church. George Willett married three times:

[1907] “...The more extended trips taken in this period included two expeditions to the Santa Barbara Islands and one to the coast of Lower California. The earlier of the Channel Islands trips was made in November of 1907, in a "delapidated fishing smack" with his old school friend, Clarence Linton, Linton's father [Horace], and a crawfisherman named "Coldfoot" Jorgenson. As described by the younger Linton (Condor, 10, 1908:124), this ten-day expedition was an exciting one. As is frequently true around the islands, the wind was strong, and the none too sturdy craft was twice saved from destruction on the rocks by the skill and quick-thinking of Willett and the Lintons. Once established in camp at Santa Cruz Island, however, they found the collecting good, and there was fine opportunity for observation.

Willett's second trip to the islands was taken in June, 1910, with several other Cooper Club members, and on a more seaworthy launch. Two days were spent on Anacapa Island where nesting birds were observed and eggs were collected. Touching at Santa Cruz and Santa Rosa Islands the party went on to San Miguel where it was stranded for 14 days due to storms... ” (Condor 48:2(55) March-April 1946).

Willett participated in an expedition to find elephant seals off Lower California in 1912 with C. B. Linton aboard Flyer. He collected a Peregrine Falcon on Islas San Benitos on April 3, 1938 (LACM 86941).

Willett died in Los Angeles on August 2, 1945 at age 66, and is buried in the Los Angeles National Cemetery.

Copies of Willett’s field notes can be found in the library holdings of the Western Foundation of Vertebrate Zoology in Camarillo, California.

WILLETT, George “Born in Hawkesbury, Ontario, Canada, May 28, 1879. An active ornithologist, a member of the Cooper Ornithological Club and the American Ornithologists' Union, who has collected extensively in southern California and in Alaska. His most important publication is entitled Birds of the Pacific Slope of Southern California. THis paper appeared in 1912 as Pacific Coast Avifauna No. 7 and contained notes on 377 species and a hypothetical list of 18 species. In recognition of his work, Prof. L. H. Miller has named in his honor Sula willetti, an extinct Gannet from the Miocene of Lompoc, California.”

» Willett, George A revised list of the birds of southwestern California in Pacific Coast Avifauna 21: (1-204) 1933

» Willett, George Remarks on some resident birds of the Santa Barbara Islands in Southern California Academy of Sciences Bulletin 44: (51-54), 1945

June 10, 1910 [SBWP]: “Islands scoured by scientific men. The little power launch Niedra, Captain Ed Hall, home port San Pedro, came in late yesterday afternoon from San Miguel Island for gasoline and water, and also to meet Captain Hall's wife and other members of his family who are expected to join him here for his return trip to San Pedro by way of San Nicolas. Incidentally, Captain Hall referred to a smashed foot which injury he received while attempting to make a landing, during a squall, on San Miguel. The Niedra is on a scientific expedition. At least, she is the transportation for two scientific expeditions which are engaged in the compilation of notes of the channel Islands and in the collection of curios and specimens. At San Miguel Island, the Niedra left Messrs. Willets [Willett] of Los Angeles and Appleton of Simi, Ventura county, and others, a party of taxidermists and bird men, who will probably spend two or three weeks on the island, with headquarters at Kiler's (Cuyler's). At San Nicolas, he will stop for Mr. and Mrs. Clarence Linton and party, who have been ten weeks on the dreary isle in the interests of a new institution in Los Angeles, gathering curios.”

February 2, 1941 [SBNP]: “An eight-week expedition to the Channel Islands off the southern California coast to search for biological specimens will be undertaken on February 14 by a group of scientists from the Los Angeles County Museum. The party will be headed by Dr. John A. Comstock, director of history at the museum, and will include George Willett, ornithologist, Lloyd Martin, entomologist; George P. Kanakoff, invertebrate zoologist, and Jack C. Von Bloeker, mammalogist. Permission for the expedition was granted recently by the Board of Supervisors. The party will spend a week on each of the eight islands, gathering specimens, and will return to the mainland April 11.”

November 27-December 14, 1941: [n.d.; n.p.] “Scientists 7 marooned by war on Santa Rosa Isle. Santa Rosa Isle. Marooned today by the wartime shipping restrictions were a party of scientists, comprised of four men and three women, on Santa Rosa Island of the Santa Barbara Channel group. The party, headed by George Willett, curator of birds at the Los Angeles County Museum, includes Mrs. Willett, Miss Marion Hollenbach, Miss Barbara Loomis, Harry Fletcher, Jack Couffer and Richard W. Case. They were sent out to excavate kitchen middens of a prehistoric village, made the important discovery of the skeleton of a dwarf elephant and now can't get back to the mainland.”

George Willett by John A.Comstick: “George Willett, Ornithologist of the Los Angeles County Museum and member of the Committee on Conservation of the Southern California Academy of Sciences died in Los Angeles on August 2, 1945. Mr. Willett had attained a place of distinction in the fields of ornithology, mammalogy, conchology, and paleontology. His numerous published papers in all of these branches of the zoological sciences had won for him the distinction of being an authority. More than that, his genial nature, and untiring efforts in behalf of others made for him a host of loyal friends. George Willett was born in Hawkesbury, Ontario, Canada, May 28, 1879, the son of George and Hannah Theodosia (Hill) Willett. His father was an ordained Congregational minister. Very early in life he developed the keen powers of observation and analysis which enabled him to obtain first hand knowledge of living creatures, and to organize, correlate and record his finding, thereby to later win for himself a place among scientists who possessed far more academic training than did he. His grammer school work was obtained in Cowansville and Eaton Corner, Ontario, Canada, and Redlands, California, and his high-schooling was had at San Luis Obispo and Whittier, California. He graduated from Whittier Preparatory School in 1896. The following year he entered Whittier College, where he played on the football team. He was not able to carry through his college work owing to economic pressure. On May 5, 1898 he enlisted in the 7th California Volunteer Infantry, Company G, for the war with Spain. Later he served in Company A of the 35th U.S. Volunteer Infantry on active duty against Aguinaldo in the Phillipine Islands. He was honorably discharge on December 2, 1898, and thereafter served for a shore time as a member of the Manila police force, before returning to the United States. In November of 1902 he joined the U.S. Geological Survery and served under Harry Patterson until October 1903. The following year he became a member of the Los Angeles Polic force. He remained in police service for eight years during which he carried on intensive work in ornithology in his spare time. Early in 1905 he married Anna M. Wells, and his son George Jr. was born the following year. In 1906 he was elected to the Vice-presidency of the Cooper Ornithological Club. Three years later he was made a member of the Committee appointed by that organization to prepare documents and historical data for inclusion in the corner stone of the Museum building then being erected in Exposition Park. In 1912, the Cooper Club published his "Birds of the Pacific Slope of California." This same year he was made a member of the Conservation Committee of the Southern Division of the Cooper Ornithological Club. In the summer of 1912 he resigned his sergeancy in the Police Department and became Ornithologist for the U.S. Biological Survey. From that year on until 1926 most of his time was spent in Alaska. This was probably the most acquisitive period of George Willett's life from the standpoint of biological study and observation in the field. The first six years, 1912 to 1917, her served as Ornithologist of the U.S. Biological Survey, his studies taking him to Sitka in the summers of 1912-'13, and to Forrester Island in 1914 to '17. His winters were spent in Arizona and California except for a short trip to Laysan and Midway Islands in 1913. From 1918 to 1921 he pursued biological studies independently, combining them with trapping, fishing and other occupations. He was on Forrester Island from 1919 and 1920 and also lived on Prince of Wales Island for a period of time. He was also at Wrangell in 1920 and '21. From 1921 to 1925 he was a Deputy U.S. Marshall in Ketchikan, Alaska, where, on February 18, 1925 he married Ora Alta Bellah of Ketchikan. Thereafter Ora was his constant companion in the field and able assistant in his scientific endeavors. In the summer of 1925 he and his wife ran a fox farm on a small island off the coast of Alaska. From June to December 1926 he served as Ornithologist of the Alaska Game Commission. The following February he was called to the Los Angeles Museum to serve as acting Ornithologist on the Science Staff. In July of 1928 he became Curator of Ornithology in that institution, which position he held until the day of his death. The nineteen years in which he held this post were the most productive of his entire career, as attested by the many published records, the considerable number of new species that he described, and the wealth of material that he added to the collections of the Los Angeles County Museum. A list of the articles on natural history subjects which he wrote and published between 1895 and 1945, totaling 126, reveals that three-fifths of the items were issued during the time that he served as head of the Department of Ornithology at the Museum. Several of his papers appeared in our Bulletin of the Academy. He was buried with military honors in the Sawtelle Soldiers Home Cemetary, the final services being conducted by Roosevelt Camp, United Spanish War Veterans, of which organization he was a member.”