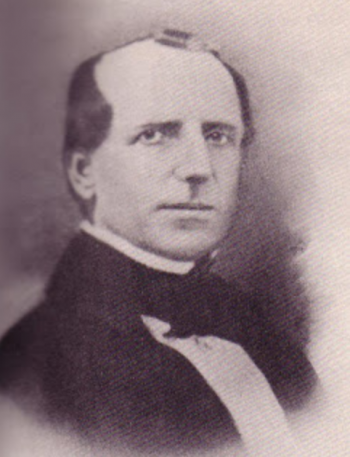 WILLIAMS, Isaac “Don Julian” (1799-1856) was born in Exeter, Pennsylvania near Scranton. He had resided in Ohio and Missouri before moving to New Mexico about 1823. He remained there for several years and then joined a fur trapping expedition to California in 1832, led by Ewing Young. Along the way in the Rocky Mountains, he met pioneer frontiersman, George Nidever.

Isaac Williams settled in Los Angeles, became known as Don Julian by the locals, and worked as a merchant before marrying Maria de Jesus Lugo in 1839. Rancho Santa Ana del Chino, a Mexican land grant given by Juan Bautista Alvarado to Maria's father, Antonio Maria Lugo, was turned over to Williams, Lugo's son-in-law. After bearing three children, Maria de Jesus died in childbirth in 1842. The following year, an additional three square leagues (for a total of eight square leagues) was granted by Governor Micheltorena to Williams. While at the Chino ranch, Williams successfully grazed thousands of cattle for the hide and tallow trade, taking these products to the crude harbor at San Pedro Bay. William Heath Davis, in his autobiography, discusses 1846-1847 trade with Williams and a visit to the ranch in that latter year.

“It was in 1835 that Isaac Williams, once Collector of the Port of San Pedro, superintended a rescue party. The schooner Peor es Nada, Captain Hubbard, was chartered. While the schooner was anchored in the offing, the crew had little trouble or delay in…” The Pacific Monthly, V. 18; 1907. Wm. Bittle Wells.

[1835]: “I arrived on the coast in the year 1834, in the month of November. In the early part of the following year (1835), I came to Santa Barbara and engaged in otter hunting, which I have followed almost uninterruptedly until within a few years. At the beginning of 1835, Isaac J. Sparks and Luis T. Burton, Americans, also otter hunters, settled here, and chartered the schooner Peor es Nada (worse than nothing) for a trip to the lower coast. The schooner was commanded by Charles Hubbard, who was hired by the owner of the schooner, a Spaniard at Monterey. The crew placed in her by Sparks and Burton was, with to or three exceptions, composed of Kanakas. The Peor es Nada left Santa Barbara about the latter part of April, 1835. About three months after, she returned to San Pedro, and from there went directly to the Island of San Nicolas for the purpose of taking off the Indians then living there. Sparks, who hunted with me for several years afterwards, told about removing the Indians, but I cannot now recollect who authorized or caused their removal. I remember distinctly, however, that a man by the name of Williams, a former acquaintance of mine in the Rocky Mountains, was an interested party, as he assisted in their removal. I am under the impression that another man in Los Angeles took an active part in the affair…” Nidever statement in Thompson & West History of Santa Barbara County, California (1883); [Statement of John Nidever (p. 162) in Heizer, R. F. & A. B. Elasser. Original Accounts of the Lone Woman of San Nicolas Island (121- ) in Aboriginal California: Three Studies in Culture, 1966.

October 28, 1853 [NYT]: “Santa Barbara, Thursday, September 15, 1853. Messrs Editors… Mr. Williams (who now owns the ranch called ‘Del Chino’ in Los Angeles), with other Americans, had been in the habit of visiting the island, while hunting otters, which abound in those waters. At one of these visits he brought away with him a young Indian squaw. At this time there were about seventeen Indians living on the island. Shortly afterwards, Mr. Williams prevailed upon Mr. Hubbard, who was captain of a small schooner, owned co-jointly by Mr. Sparks, (now of Santa Barbara), and Mr. Gomez, of Monterey, to bring over all the Indians who remained. This was easily accomplished, as the Indians were desirous to remove. After they had all got on board the schooner, one of the Indian women discovered that her child was missing, and asked permission to go on shore to look for it. This was at once granted. She remained a long time in the search, and at length made her appearance crying most bitterly, She said that she could not find her child, and expressed her apprehension that it had been eaten by wild dogs, which it seems infest the island. She remained on the beach lamenting the loss of her child, and whether through fatigue or excess of grief, she laid down and fell asleep. In the meantime, it commenced to blow a gale of wind, and the schooner put away, leaving her alone on this desert island. What the feelings of this poor child of nature were when she opened her eyes and took a survey of her situation, are only known to herself and to the divine Providence, who still watches over her.”

February 1857 [HCM]: “From this period little is known of the Indians remaining on these islands till the year 1836 when Captain Isaac Williams, late Collector of the Port of San Pedro, visited this island [San Nicolas Island] in a small vessel, and took on board all the Indians remaining but one woman, who was left in the manner stated by Captain Russell, in the California Magazine.”