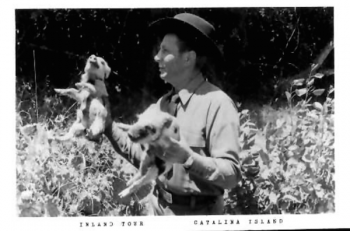 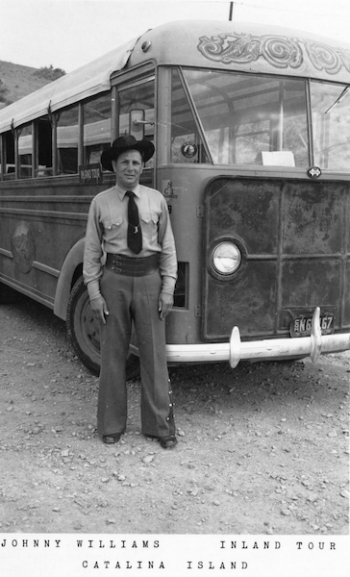 April 24, 1947 [TI/Avalon]: “Births. On Sunday, April 6, Mr. and Mrs. Johnny Williams of Avalon welcomed a newcomer into their home. The young lady has been named Jacquelin Mary and she tipped the scales at 6 pounds and 4 ounces."

December 2, 1954 [TI/Avalon]: “Wedding of local interest in Las Vegas Saturday. A wedding of much local interest took place at Las Vegas, Nevada last Saturday morning, when Lucille Blaine, of Wilmington, became the bride of Johnny Williams, of Avalon. The bride is a native of Wyoming and her parents now reside in Wilmington. Last Summer, she worked at the local Safeway store. The groom has lived in Avalon for a number of years, where he has been employed by the Santa Catalina Island Company. Their many friends have been busy congratulating them. They will make their home here in Avalon at 119 Olive St. A reception was held at the home of the bride's parents, Mr. and Mrs. Pat O'Connell, in Wilmington, on Sunday afternoon."

September 1, 1955 [TI/Avalon]: “Blanche W rescues shipwreck victims. The passengers aboard the "Flying Fish Boat" for their money's worth Saturday night when they witnessed and actually took part in the rescue of ten persons from the dark sea. The 38-foot Starbright from Newport foundered because of failing bilge pumps a quarter of a mile off Seal Rock and the ten persons aboard went into the water. Two of the swimmers reached shore but the rest, including some women, were still struggling when the Blanche W on its way back from its regular trip accidentally picked out the couple in the big light. Correctly interpreting the frantic signals from shore, the crew of the Blanche W cast around with the huge spotlight and got every person in the water safely aboard. The ten men and women suffered no more than the effects of exposure to the chilly water, according to a report from the hospital. Spokesmen for the rescued people were lavish in their praise of Capt. Hernandez, Johnny Williams and Andy Hernandez and the passengers who lent a hand. The quick and skillful manner in which the rescue was accomplished and the vigilance displayed in summing up the situation so promptly, undoubtedly averted tragic consequences they said.”