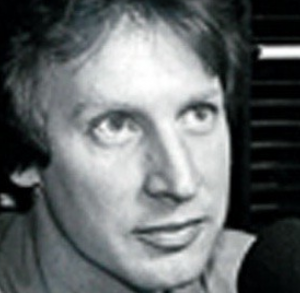 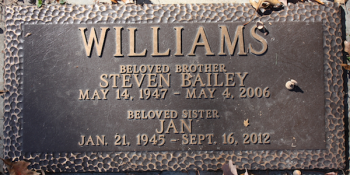 WILLIAMS, Steven Bailey (1947-2006), 59, disc jockey murdered offshore by Harvey Morrow on May 18. Los Angeles County Coroner's Office case #063815. Williams’ body was found floating several miles off the West End of Catalina. Williams’ body remained in the ocean for an estimated two weeks before being discovered by a passing yacht from Newport Beach on May 18, 2006. Until he was identified, he was known as “John Doe 88.” Williams had recently inherited $2 million from his father and had subsequently been swindled out of it by a man named Harvey Morrow in San Pedro. On Wednesday, November 9, 2011, a jury in Long Beach Court convicted Morrow of First Degree Murder and Murder for Financial Gain. The following month, he was sentenced to life in prison without parole, plus 25 years.

November 10, 2011, [www.westword.com]: “Back in the '80s, Steven B. Williams was among the hottest celebs in Denver -- half of KBPI's radio tandem Steven B. and the Hawk, which won multiple Westword Best of Denver awards. But in 2006, he was found dead in the waters off Santa Catalina Island, one bullet in his head. Now, finally, ex-stockbroker Harvey Morrow has been found guilty of committing the crime. The motive, predictably, was money -- not cash Williams earned during his radio heyday, but about $2 million he reportedly inherited from his father's estate. According to the Los Angeles Times, Morrow told Williams he was a New York investment banker who'd known his dad -- and before long, the jock, who'd been making his living doing voiceover work in SoCal prior to landing in the chips, asked him to set up a trust fund. Once he had access to these funds, prosecutors said, Morrow began lifting sizable chunks of it for his own purposes, including to fix up a yacht with a fireplace and electronic gadgetry whose cost topped six figures. He also allegedly transferred loot directly into his own bank accounts. For a while, the pair remained pals; they lived together and planned an around-the-world sailing trip. But somewhere along the line, Williams began to wonder if he was being bilked and talked about confronting Morrow. Then, in May 2006, shortly after being seen at a marina, Williams vanished. When his body was found, authorities estimated that he'd been in the water for two weeks. Before this gruesome discovery, Morrow told the curious that Steven B. had moved to Hawaii. Then he disappeared, too. His destination was Great Falls, Montana, where he landed a job at a car dealership. There, he told a co-worker, Joe Parsetich, that he'd moved inland because his wife had died in a tragic boating accident, and he wanted to get as far from the ocean as he could. Mistake: Parsetich was an ex-cop, and when he did a web search to find out if the tale was true, he stumbled upon a Denver TV station report naming Morrow a person of interest in Williams's slaying. He then contacted authorities, who subsequently busted Morrow. Five years later, Morrow, now 60, was finally convicted of murder for financial gain. At his December 16 sentencing, he'll face the prospect of life in prison without the possibility of parole -- and sans the prospects of spiffing up that yacht.”

May 15, 2017, [www.monstersandcritics.com]: “Steven Bailey Williams had been a popular drive-time DJ during the 1980s and worked doing voice overs and other promotions. Williams had inherited some stock from his late father and Morrow introduced himself as old friend of his father who wanted to help him deal with the estate. He put the inheritance in an off-shore account in the British Virgin, the total amounted to around $1.8 million. However, Morrow started to use the cash to refurbish his yacht and also began moving small amounts to a U.S. bank account. The pair were friendly during the time and traveled together, but Williams became suspicious after friends asked why he seemed to have no access to his own cash. He decided to confront Morrow and told his friend that he was going to head over to Catalina Island on the yacht and confront Williams. A boat owner spotted Williams at the marina on May 4, 2006 and that was the last time he was seen alive. Friends asked Morrow about Williams location and were less than convinced by his explanation that he’d suddenly moved to Hawaii or Mexico. When Williams body was found floating off Santa Catalina Island these friends reported their suspicions to local law enforcement, but by this time Morrow was missing himself. He turned up in Montana but was caught out when a lie he told a co-worker was uncovered when the former-cop checked it out online. He was arrested a week later and in 2011 60-year-old Morrow was sentenced to life without parole and 25 years for first-degree murder for financial gain. During the investigation police used the GPS on the boat to plot the course the pair had taken and found out that Morrow’s alibi did not really match up.”