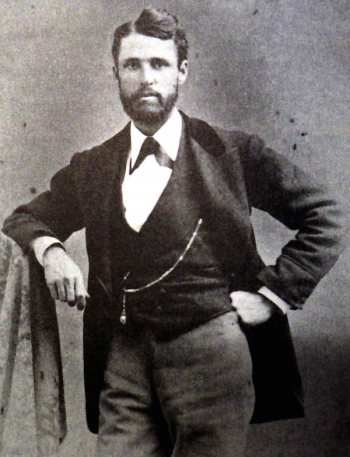 WINCHESTER, Robert Fulton (1845-1932), was born in Brewer, Maine on April 27, 1845. As a young man interested in medicine, he became an apprentice to a horse-and-buggy doctor, and soon thereafter volunteered as a surgeon in tent hospitals during the Civil War. After the war he attended Bowdoin College in Maine, graduating in 1867. Winchester moved to San Francisco in 1868, and then to San Juan Capistrano where he met Colonel W. W. Hollister. In 1872 he moved to Santa Barbara as the Hollisters’ personal physician, later competing for Santa Barbara patients with Dr. Brinkerhoff.

Colorful stories are linked to the possibility of Winchester having been both a drug addict and a Chinese-smuggler.

Dr. Winchester retired from practice in 1925, although he continued to see patients for the rest of his life. Dr. Winchester died at age 87 in Santa Barbara, CA on March 31, 1932.

TRUSSELL-WINCHESTER ADOBE: In 1854, Captain Horatio Gates Trussell of Santa Barbara used salvaged timbers and brass from the Winfield Scott in construction of his adobe home on Montecito Street. In 1878, the adobe passed out of the hands of the Trussells and into those of William M. Eddy, a prosperous banker, who probably bought the house as a real estate venture. It is unclear exactly what use Eddy put to his new purchase; what is clear is that in the summer of 1882 he sold it to the Uriah Winchester family.

The Winchesters, from Maine, arrived here in 1869. Among the three remaining children was Robert, who had become a doctor and, in the early 1870s became the personal physician of W. W. Hollister. The youngest, Charlotte, was married to Stanley Bagg, who for a time was owner of the famous Tombstone Epitaph newspaper in Arizona. The Winchesters added a bedroom to the house, enlarged the main bedroom, and probably added the sun porch to the east side of the home. The family began to sell bits and pieces of the property in the mid-1920s and by the end of the decade the tract belonged to John and Katherine Hastings, the latter being the daughter of Charlotte. With Katherine’s death in 1955, the property came into the possession of the Santa Barbara Historical Society, which, in accordance with her wishes have preserved the adobe and with it an important slice of local history.

May 9, 1889 [SBMP]: “Word was brought from Santa Cruz Island by the schooner Tuesday that a cutting affray had taken place on the island and several men were badly injured. Dr. Winchester was taken aboard to attend to them and the schooner sailed yesterday morning. The captain’s story was to the effect that he had been made to make a landing at the island, but a sheep herder told him of the fight from the wharf and asked him to turn about and bring a doctor, which he did. Absolutely no details were obtained. Another sails for the island today or tomorrow.”

May 21, 1889 [SBMP]: “The schooner Santa Rosa arrived from Santa Rosa Island yesterday, bringing John More, the brother of the injured ranch owner. When the schooner left, A. P. More was doing well and able to move about on the island. Dr. Winchester returned yesterday to his patient to set the broken arm, which was too badly swollen on his previous visit to admit of being touched.”

March 1, 1895 [LAT/SB]: “Dr. R. F. Winchester has brought suit against the California Iron and Wrecking Company to recover $1320, alleged to be due for professional services rendered to one Pederson, a sailor, who was recently injured at the scene of the wrecking operations on the vessel Crown of England.”

August 23, 1916 [SBMP]: “John Russell, superintendent of Captain W. G. Waters’ ranch on San Miguel Island, had the misfortune a few days ago, to be kicked in the breast by a mule. He came to the mainland with the first opportunity that offered, when the power yacht Dreamer put into Cuyler’s Harbor while on a cruise around the islands. Dr. Winchester was called to attend to Mr. Russell’s injuries, which were found to be not of a serious nature. The injured man was accompanied by his wife. Both will go to Los Angeles today and the husband is expected soon to be able to resume his duties on the island.”

August 23, 1916 [SBDN]: “Suffering from a mule kick in the chest, John Russell, superintendent of Captain Water’s ranch on San Miguel Island was attended here yesterday by Dr. R. F. Winchester. The injury received several days ago was not found to be serious and Mr. Russell and his wife who accompanied him on the trip to the mainland have left for a visit to Los Angeles.”