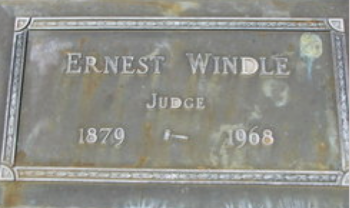 The Windle family moved to Southern California in 1904. Windle worked in San Pedro as an auditor-accountant for the Bannings’ Wilmington Transportation Company before moving to Avalon in 1906 where he was employed by the Santa Catalina Island Company as the island’s auditor-accountant. The “Judge” as he was called, served as magistrate of the Santa Catalina Island Justice Court for fifty-one years. He owned a newsstand, and founded Avalon’s weekly newspaper, the Catalina Islander in 1932. Windle served as editor and publisher until 1952. During his tenure as magistrate, Windle married more than 1000 couples on Santa Catalina Island and presided over some 14,000 cases. He lived at 374 Whittley Avenue in Avalon.

Judge Windle died on February 12, 1968 at age 89. He is buried in Avalon Cemetery next to his wife, Miriam Rushton Windle (1879-1959). Son Johnny helped build the casino and was a historian.

A tree by the Avalon courthouse is dedicated to Judge Windle, with a plaque:

This tree is dedicated to Judge Ernest Windle for service above self. Rotary Club of Avalon 1963.