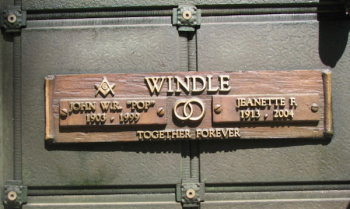 WINDLE, John William Rushton (1903-1999), son of Judge Ernest Windle and his wife, Miriam. John Windle was life-long resident of Santa Catalina Island. He died at age 95 and is buried in Avalon Cemetery.

May 14, 1999 [TI/Avalon]: “John Windle, who has lived on the Island longer than anyone, passed away last Wednesday. He was 95. John William Rushton Windle was born on Sept. 27, 1903 in Hamilton, Ontario, Canada to Ernest and Miriam Windle. His father moved to the Island in 1908 and in 1910 his wife and family arrived. Miriam cried for a month after arriving because the only long-term housing at that time was in a tent and she had left behind a nice home in England. They moved into a home on Metropole Avenue in the ensuing months. John, however, fell in love with the Island the moment he arrived. He got a job as a rower for the older boys who dived for coins that were thrown from the steamer. Ernest founded the local paper, The Catalina Islander, in 1914 and John went to work after school as an office boy setting type. As he got older he himself became a diver for coins that were thrown by passengers arriving on the steamer. He also had an entrepreneurial streak. On Sugarloaf Mountain, there was an 80-foot ladder straight up that tourists would climb. John would sit at the bottom and when people got to the top, they were too scared to come down and John helped them out — for a price. 25 cents was the going rate for him to climb up the ladder and guide people down. He was also a runner for the Marconi Company, delivering telegrams. As Avalon did not have a high school, he went to the mainland and continued his studies at Los Angeles Polytechnic High School. When John was 16, William Wrigley, Jr. purchased the Island from Captain Banning. John went to work as a messenger boy for the Santa Catalina Island Company and thus began a 31-year career working for the Wrigleys. He was promoted to driver, then to Fleet Superintendent under D. M. Renton. He was responsible for all transportation, including the tour bus drivers, taxi drivers and the stevedores, among other duties. John was one of three men who accompanied William Wrigley, Jr. on the day he made the decision where to build the Casino. They drove to Sugar Loaf Point and Mr. Wrigley said, 'This is the place.' Mr. Wrigley envisioned a round building that had no interior supports that would house a theatre and ballroom. He told 24-year-old John that he would have a new mahogany desk in the new casino. As always, Mr. Wrigley was true to his word, and when the Casino was opened in 1929, it included John's new desk. John also loved to fly. He claimed that he was the first passenger to fly out of Avalon on Sid Chaplin's airplane. He soloed in 1922 and purchased his own wooden Curtiss flying boat. John married Helen Briseno and John William Windle, Jr. was born in April of 1928. He was later married to Verna Clay and Ernest Rushton Windle was born in January of 1938. Upon Helen's untimely death, young John, Jr. came to live with his father. John purchased a home at 301 Claressa in 1941, where he lived for the rest of his life. In 1945 John met Jean Ochsner. They fell in love and were married on Jan. 20, 1950. John became a father in the truest sense of the word to Jean's children, Bob, 14, and Susie, 11. After leaving SCICo, John became constable of Avalon. His duties included transporting prisoners to the mainland and bailiff duties for his father who had become Avalon's judge many years before. Since his duties were only part-time, he also was owner of the Union Ice Company ice house and an agent for Republican Van Lines. He sold the ice house in the late 1960s, followed by the moving company and retired as constable in 1973 at the age of 70. Upon Jean's retirement in 1978, they spent a good portion of their time in their Volkswagen but traveling around the country. They moved up to a motorhome and continued to travel America's highways until 1995, always looking for a good place to fish, rock hunt and find deals on Catalina Pottery...”