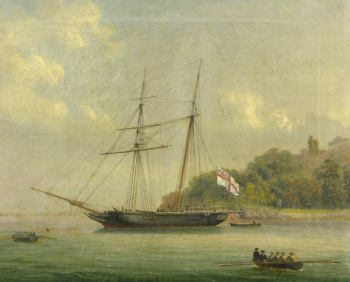 In June 1846, Capt. Henry Kellett of the Royal Navy arrived leading a two-ship surveying expedition on the Pacific Coast. He commanded HMS Herald, a 680-ton, six-gun frigate, and Lt. James Wood was aboard HMS Pandora, a speedier packet-brig of 319 tons and 3-guns. After two months surveying Victoria’s and other nearby harbors, they departed for Panama, fully intending to return to continue with their charting. Pandora examined the coasts of Columbia, Guatemala and California, and as far north as Vancouver Island. On his return to England, he was promoted to rank of Commander.

Two survey ships were dispatched from Plymouth in June 1845, H.M.S. Pandora and H.M.S. Herald, Captain Henry Kellett. The vessels worked off the Pacific Coast of North America and conducted a survey of the coast of British Columbia after the Oregon boundary dispute with the United States, arriving in June 1846.

Both ships were assigned for charting the coast of the Americas. The vessels reached Cape Flattery, Washington (most northwesterly tip of the contiguous 48 states) on 24 June 1846. The Herald and the Pandora spent several months charting the Puget Sound and Vancouver Island until September 2, 1846 when the vessels sailed south for Alta California. (In 1847, the Modeste was the only British ship in the region during 1847, and the Oregon Treaty "seemed to have taken the edge off of the Royal Navy's interest in the Northwest Coast.")

In 1848 Kellett and H.M.S. Herald was reassigned with to join the search for Sir John Franklin in the Bering Strait.

Specimens collected on these Pacific coast voyages are in the British Museum, including two Santa Rosa Island foxes likely collected in 1846.

Obituary: “Commander James Wood, R.N., has been a useful contributor to our hydrographical knowledge of the globe. He began his career as a maritime surveyor at Fernando Po, under the late Admiral Fitzwilliam Owen, in the year 1827. He afterwards served in the Hecla in the Bight of Benin, and then went to the coast of California. He next joined the Etna, Captain Sir Edward Belcher, and assisted in his surveys on the African coast, on the Bar of Oporto, and on Skerki Bank off Tunis. He again returned to the coast of Africa in 1834 with Commander Skyring, and, after the death of that officer, he joined the Raven, and was employed in the survey of the west coast of Morocco and the Canary Isles. In 1836 Lieut. Wood served with Capt. Hewitt in the North Sea Survey, and in 1837 joined the survey of the coast of Wales and the south coast of England. From this station he was appointed to command the Pandora, accompanied Capt. Kellett in the Herald to continue the survey of the west coast of America, and took share in the examination of the coasts of Columbia, Guatemala, and California, as far as Vancouver Island. On the return of this expedition to England, Lieut. Wood was promoted to the rank of Commander; and in 1855 was given charge of the survey of the N.W. coast of Scotland, and some of his plans of the Isle of Skye have been exhibited before this Society. The climate of the North of Scotland proved too severe for a constitution weakened by exposure for many years under a tropical sun; his health gave way, and he rapidly sank on the 12th April of the present year, at the early age of 47. In the Admiralty Charts of Africa, America, and the North-West Coast of Scotland he has left a name that will long be gratefully remembered by the mariner who has to navigate those coasts.” [1860. Journal of the Royal Geographical Society of London Vol. 30 (1860) p. cxxvii]