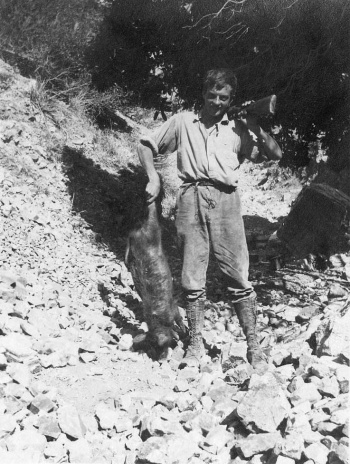 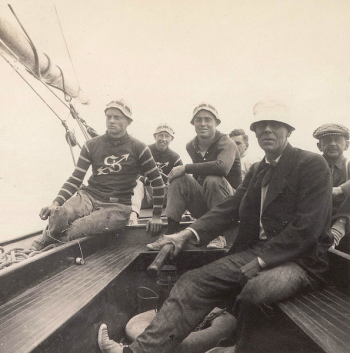 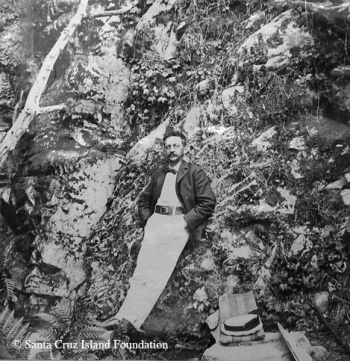 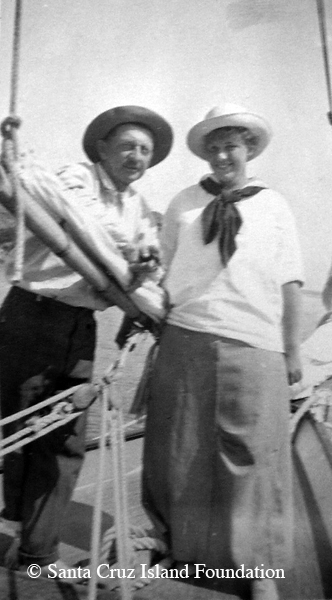 WRIGHT, Howard Walter (1892-1977) [SS#550-28-4305], born September 6, 1892 in Pasadena, California, was the second of three children and only son born to Walter Savage and Bernice Wright. He lived in Pasadena his entire life, and attended Throop Polytechnic Institute and Stanford University. At Stanford, fellow bird enthusiast, Gaylord Snyder, was Wright's roommate.

Wright collected a set of Bald Eagle eggs on Santa Catalina Island on March 29, 1909 [WFVZ 3223]. In July 1912, Wright, his Stanford friend, Gaylord K. Snyder, and others cruised around the California Channel Islands, visiting Santa Barbara, Anacapa, Santa Cruz and San Miguel islands, including Prince Island. Although they anchored at Santa Rosa Island they only went ashore for about an hour and apparently took no specimens. The following year, in July 1913, Wright sailed Siwash to San Martin Island, Mexico on a birding expedition.

Between 1908 and 1912, Wright collected birds on all but Santa Rosa Island, variously in company with ornithologists A. J. Van Rossem, P. I. Osburn and others. During World War I Wright served a lieutenant in the U.S. Navy. He gave up collecting birds to devote his time to his career.

Wright was a Los Angeles attorney and member of both the California and American Bar associations. He served as commodore of the Los Angeles Yacht Club and the Trans-Pacific Yacht Club, and for 35 years held the sailing record around Santa Catalina Island.

Wright died on September 11, 1977 in Pasadena, California at age 85, and his ashes were scattered at sea. Wright outlived his wife of over 50 years, Ruth Shelton (1893-1967). He was survived by his daughter and three sons:

August 25, 1910 [SBI]: “Paul Jeffries, skipper on the yacht Wasp, returned from the Santa Barbara races last night bringing a tale of thrilling experiences of the South Coast fleet on the return voyage. The Mah-po, Minerva, Siwash and Wasp started from Santa Barbara Saturday with the understanding that all were to anchor in Fry’s Harbor at Santa Cruz Island Saturday night and proceed to port Sunday. A heavy wind was blowing and when the Minerva arrived her mainsail was in tatters and some of the others were in little better shape. Fry’s Harbor is a small cove and there was scarcely more than room for the four yachts. When the Mah-po came in she had all sails set and before they could be reefed she was driven on the beach. It is not believed that she was seriously damaged. The Genevieve did not put in at Fry’s Harbor, but continued direct to port, making the run in 16 hours…”

August 25, 1910 [LAH]: “San Pedro. August 24. Four yachts coming back from the Santa Barbara regatta had a rough time of it the first day out on their return home, according to tales of the crew on the Wasp, which arrived here late last night. The Minerva, Mah-pe, Siwash and Wasp put in at Fry’s Harbor on Santa Cruz Island Saturday night, after a heavy wind had carried away the mainsail of the Minerva and played havoc with the other yachts. There was scarcely room in the cove for the four yachts, and when the Mah-pe came in she was driven on the beach by the heavy wind before her sails could be reefed. Her keel may be damaged, but not badly. The Genevieve and Mischief I did not put in at Fry’s Harbor, but continued to port. The Mischief got through without any mishap, but the Genevieve shipped a heavy sea and her compass, dory, steamer chairs and most everything else that was moveable were washed overboard and lost.”