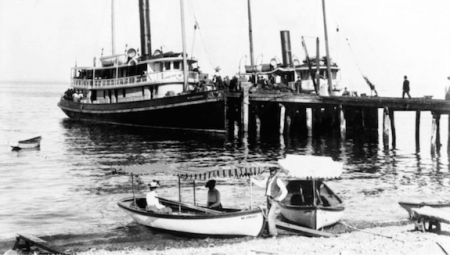 Warrior II (#81772) (1900-1936) , 101.5-foot merchant steam passenger vessel designed by William Muller and built by the Wilmington Transportation Company for the Santa Catalina Island run for which she served for sixteen years. She carried a crew of nine. On June 6, 1916 Warrior was sold to the Banning Company. They, in turn, sold her to the Pacific Steamship Company on October 6, 1917 and she was taken to Puget Sound for tugboat purposes. The Pacific Lighterage Company, a subsidiary of the Pacific Steamship Company, acquired Warrior on December 21, 1917. Her next owner was Pacific Motorship Company on July 24, 1930, and they sold her to Puget Sound Tug & Barge Company on September 22, 1930. They operated Warrior until July 26, 1938 when she was found to be unfit for further service. Warrior was burned at Seattle. [Photo. Huntington. Banning collection. Album 180 (361). 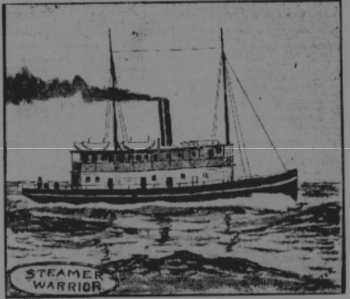 May 20, 1902 [LAH]: “Grave Charge Against Warrior's Crew. After an investigation yesterday of Sunday night's disastrous voyage from Catalina Island of the steamer Warrior, Captain William Banning said yesterday that neither the captain nor any members of the crew could be held blamable. The trouble was caused by an unusually high sea and wind which struck the vessel simultaneously. It was denied at the steamship company's office that the passenger list was crowded; on the contrary the claim was made that the Warrior carried but 117 passengers, whereas she is licensed to carry twenty to twenty-five more. From San Pedro it was reported that there were 228 passengers aboard the Warrior. The inspector of hulls will make an investigation into the causes of the panic aboard ship and the drowning of S. F. Knight of this city. One of the sailors of the Warrior yesterday told a concise story of the voyage, telling how the ship came to be thrown on her beam ends. He said:

"The steamer was riding the sea with ease, but every time her stern rose out of the water she showed a disposition to swing away from the course, which was quartering on the wind. A high wave came along, and just at the moment that its crest was under the midship, her bow and stern protruding, the wind caught her and spun her around like a top, dropping the vessel crosswise on the sea. A succeeding wave threw the vessel on her beam ends. The man who was lost had been warned to be careful of his position on deck, but gave no heed to the warnings. When two men were overboard the crew refused to man the boats, saying that they would not live in the high sea."

This might have been true, but it was their duty to obey the captain's order to man the life boats and go to the rescue, instead of letting the vessel steam around to pick up the drowning men with boat hooks, which was done. S. F. Knight's life might have been saved had the boats gone to the rescue. An effort will be made at once to find the body of the drowned man. Captain Banning and passengers of the Warrior continued yesterday to praise Captain Driscoll and his crew, and particularly purser Neil Vickery, for the courage displayed during the trying voyage. The purser is credited with having done wonders toward calming the panic stricken passengers, and single handed supplied women and children with life preservers. The island boats made their customary trips to and from the island yesterday, although the channel continued rough. On the return voyage yesterday afternoon the Warrior brought over sixteen passengers.”

May 23, 1902 [LAT]: “The yacht Twilight crept into the Avalon Harbor late Wednesday night, after having been buffeted by strong winds and heavy seas since Sunday morning… Once out in the Santa Barbara Channel the little craft was caught in the gale which a few hours later almost wrecked the steamer Warrior from this port…”

June 5, 1902 [LAT/SP]: “The hull of the Wilmington Transportation Company’s new steamer Warrior, was taken from this port Saturday in tow of the steamer San Pedro. She will go to San Francisco to receive her boilers and engines.”

January 7, 1904 [LAT/SCat]: “Avalon. At about 11:30 o’clock, at the height of the storm, the Warrior arrived. The steamer had been dispatched by Captain Banning to convey George W. Thompson, temporary manager of Hotel Metropole, to the bedside of his mother, who is lying seriously ill.”

April 7, 1904 [LAT/SCat]: “Avalon. The Conservative Life Insurance Company of Los Angeles took Catalina by storm today. An excursion numbering nearly one hundred, including managers and employees with wives and sweethearts, came over on the Warrior, arriving at noon.”

July 6, 1904 [LAT/SCat]: “Avalon. …The band, instead of giving its usual evening concert, was placed on the hurricane deck of the steamer Warrior…”

September 13, 1904 [LAT/SCat]: “Avalon. Recent travel to this resort has broken the record for largness of volume… This morning the hegira this way set in early and a special boat, the Warrior, brought a party of 176 people for breakfast at 9 o’clock…”