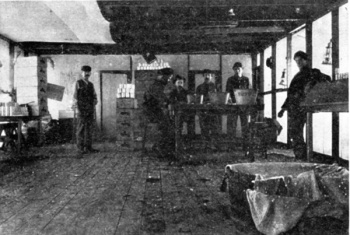 December 5, 1901 [LAT/SB]: “San Francisco capitalists recently bought concessions from the Santa Cruz Island Company to put up a cannery on the west end [east end] of that island, and are now building temporary quarters for this industry. The company proposes to can abalone, crawfish, sardines, rock cod, and all other fish that may be found in the waters there. Agents of the company were in this city a few days ago to engage fishermen to gather abalones.”

December 19, 1901 [SBMP]: “The gasoline schooner Santa Cruz left at 5 o'clock last evening with 4000 feet of lumber for the Western Coast Fishing Company who are erecting a cannery on the island.”

January 18, 1902 [LAT/SB]: “A large force of men left for Santa Cruz Island to go to work on the crawfish cannery to be erected on the east side [Scorpion Harbor] of the island.”

February 11, 1902 [LAT/SB]: “The schooner Peerless arrived from Santa Cruz Island today with a cargo of canned crawfish, packed by the West Coast Fish Company, which recently opened a canning factory on the island. This is the first shipment of canned crawfish made by the company, and opens a new industry on the island. Crawfish have been canned heretofore in this city, but not until the establishment of this new cannery has the industry ever been carried on any of the islands in the Santa Barbara Channel.”

March 12, 1902 [SBMP]: “Fisherman drowned off Santa Cruz Island several days ago. Body found three days later. His partner half starved is picked up on the beach. Story of death and privation. The gasoline launch Peerless arrived from Santa Cruz Island yesterday with news of a drowning. The man whose life was lost in the waves of the Pacific was a Swedish fisherman, August Ericson, employed by the West Coast Fishing Company, whose cannery is located on the island. The accident occurred Friday night, and the body was recovered the third day following. It was left on the island and until authorities could be notified, the Coroner Ruiz has sent a boat to bring it to this city, where the inquest will be held upon its arrival. The details of the drowning are told by David Peterson, a Finnish Fisherman, partner of Ericson, who was with him when the sea claimed him for a victim, and who had a narrow escape from a similar fate. Peterson and Ericson had been out in a skiff near Smuggler's Cove, and at dusk were approaching their camp, about a mile above the cove. The weather was not rough, but a heavy sea was running, and the turn of the tide sent large breakers upon the shore. The men had landed here often, and did not realize that there was a danger until an unusually heavy sea capsized their skiff, and both were in the water. It was dark by this time, and while both could swim, they lost each other in the darkness. Peterson was down several times, and he believes he must have been caught beneath the skiff, but he finally reached the shore. He was completely exhausted and was badly bruised in his struggle with the waves. Ericson was less fortunate, and Peterson failed to find any trace of him until Monday, when the body came ashore. The dead fisherman was a resident of San Pedro. He was about 59 years of age and single. He had lived in California for many years. Peterson came to this city to seek medical assistance, as his physical condition is somewhat impaired by his experience. He is also a resident of San Pedro, an elderly man.”

May 27, 1902 [SBMP]: “The report comes from Santa Cruz Island that the fish cannery company in excavating for the new cannery at Pelican Bay has unearthed some very valuable Indian relics. In addition to skeletons and the more common relics of the lost race, two stone hatchets remarkably well formed were discovered. Captain Merry of Hueneme, who returned from the island Saturday in his sloop Daisy, brought with him from Pelican Bay a well-preserved Indian skull, with teeth intact. The cannery was formerly located at Scorpion Harbor, but conditions are considered more favorable in the new location. A power hoist will be put in, and with the deep water immediately below the cliff it will be possible to discharge the cargoes of the fishing boaters without transferring to the skiffs. This will mean a great savings in time.”

May 27, 1902 [SBMP]: “The West Coast Fish Cannery was formerly located at Scorpion Harbor, but conditions are considered more favorable in the new location [Pelican Bay].”

August 6, 1902 [SBMP]: “The Peerless, Captain Frank Nidever, will sail for Santa Cruz Island today with lumber and lath for the West Coast Fishing Company. The company is preparing for the crawfish season, and the material is to build traps.” [also August 8, 1902 [LAT/SB].

August 8, 1902 [LAT/SB]: “The Peerless, Captain Frank Nidever, sailed for Santa Cruz Island yesterday with lumber and lath for the West Coast Fishing Company. The company is preparing for the crawfish season, and the material is for the construction of crawfish traps.”

August 16, 1902 [LAT/SB]: “The season for crawfishing began today, and men are engaged along the Channel Islands in capturing them for the market. The gasoline launch Peerless left for Santa Cruz Island yesterday with traps and supplies for the West Coast Packing Company, which operates on the island. Indications are that crawfish will be as plentiful this season as they were a year ago, and with improved appliances for taking them, it is thought the season will be a prosperous one.”

August 24, 1902 [LAT/SB]: “E. W. Freeman, Esq., of Los Angeles arrived from Santa Cruz Island this afternoon, where he had gone to serve a summons upon Allan G. Fraser, general manager of the West Coast Packing Company, which is engaged extensively in packing fish, abalones and crawfish for the market. Freeman represented Oscar Thieme of Los Angeles, who has brought action against Fraser for the recovery of $1800, which, he declares, is due him for materials delivered. Fraser, it is said, acknowledged the indebtedness, and paid a large portion of the amount, which Freeman brought with him from the island today.”

August 12, 1903 [LAT]: “Santa Cruz Island off Santa Barbra was visited Saturday by Milo M. Potter… accompanied by Allan G. Frazier, agent for the Caire brothers of San Francisco, owners of the island. The trip was made for the purpose of inspecting the most attractive portions of Santa Cruz Island with a view to leasing it and developing a fine seaside resort at Pelican Bay and other attractive nooks where the game fish of the south coast run riot in the waters… The San Francisco merchants and fish canners controlling the island have made known their willingness to lease it to the Potter Hotel Company for a term of years for resort purposes, and the final decision waits upon the decision of the next meeting of the directors of the latter…”

August 17, 1903 [SBI]: “The crawfish season opened satisfactorily to those who trap them for the market. Although the season has been open but three days, thousands of crawfish, many of which are of immense size and fine quality, have been brought to this city from the islands for shipment to San Francisco and Los Angeles. It is understood the crawfish cannery that has been conducted for several seasons by Allen G. Frasier at Dick’s Harbor [Pelican Bay], will not be operated this season, for various reasons, and nearly all of those that are caught will have to be shipped to the coast cities for immediate use. The fishermen of commerce do not view the outlook with very high favor as they anticipate a glutting of the market and consequent low prices.”

January 1905 [Sunset Magazine]: “The West Coast Fishing Company, under the terms of a lease, has erected a cannery at Pelican Bay, and in every cove one runs into Chinese and Italian craw fishers who are in the employ of the company. Here and there, too, Japanese are seen diving for abalones.”

January 28, 1905 [SBMP]: “The power yacht Peerless returned last Thursday from the crawfish cannery at Santa Cruz Island having on board 35 sacks of crawfish. Crawfish are getting very scarce and fishermen suggest prohibiting trapping them for two years.”