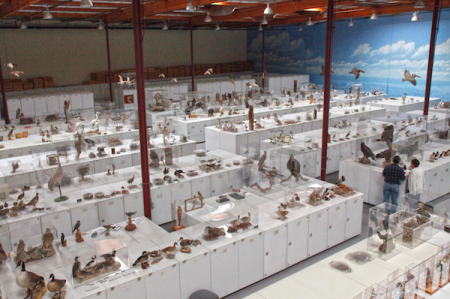 Western Foundation of Vertebrate Zoology [WFVZ] was founded in 1956 by Los Angeles businessman, Ed N. Harrison (1914-2002), whose avocational interests included egg collecting and bird photography. During his lifetime, Harrison added many important private collections to his holdings, which represent global ornithological interest. In 1991 the WFTZ gained control of the assets of the Bleitz Wildlife Foundation [BWF], and in 1993 the BWF was subsumed by the WFVZ. In 1992 a large warehouse was purchased in Camarillo, Ventura County, California to accommodate the holdings of the greatly expanded foundation, whose mission is to acquire, integrate and preserve avian collections. Library holdings include copies of field notes of early collectors on the Channel Islands, including: